It was a sweltering July night and I just wanted to go to sleep. Instead, I had a heart attack. It felt like someone was wringing my heart out like a sopping wet towel and the pain quickly moved down my arm.

In deep denial, I eventually fell asleep and woke up at 6 a.m., nauseous and in a cold sweat. Determined to soldier on, I went to work all day, where the pain persisted, spread to my back and made it impossible to take a deep breath.

I was away from my Ottawa home for work and a colleague dropped me off at a hospital ER in Windsor, where I found a waiting room full of sweaty, cranky people, including a bickering middle-aged couple. One argued they should have just crossed the border to Detroit because “at least there I wouldn’t wait so fucking long.”

I was triaged immediately.

Alone and overdressed in my fancy work clothes, I spent the evening undergoing multiple ECGs, a CT scan, an X-ray and enough blood tests to leave my arms a bruised mess. Hours later, the ER doctor pulled back the curtain and told me that in her opinion my “cardiac event” was triggered by massive nodules they found all over my thyroid.

I was discharged at 2 a.m. with a detailed note to call my family doctor as soon as possible for a followup.

As I lay in a hospital bed, strapped to all these machines, I scrolled through Twitter on my phone and witnessed Canadians get fired up about the American Democratic primaries. Twitter was all aflutter over one particular debate on health care. I watched, curiously, as Canadians regaled their American followers about the wonders of our free (except we pay for it), readily available (except if you live rurally) medicare system for all (except if you’re a new Canadian or trans or Indigenous).

Medicare is a core Canadian value. We love to humblebrag about all that socialized medicine! Tommy D hooked us up and Canadians are super proud to tell you so.

And Americans have been giving up plenty of chances to dunk on them lately. “Nobody’s going to go bankrupt for getting sick in this country!” we say and then collectively high five each other. (Except if you are targeted in a terrorist attack and then you have to rely on donations.)

I learned the hard way how sacred medicare is when I dared to call it a “broken system.”

Weeks after my ER visit in July, I got a letter in the mail informing me that my followup appointment with a cardiologist was scheduled for April 2020. A full 10 months after my “event.”

I still haven’t heard back from an endocrinologist about these little nodules of mine.

Like a true millennial, I took my grievances to Twitter where I posted a picture of my letter and asked Canadians why we’re so smug about a system that is clearly broken. 2019 is a Canadian election year. Who is going to prioritize medicare?

The backlash was swift, but the bulk of it consisted of “Well, at least you’re not American!”

God, how we love to play that game.

And with all due respect, you can shove it.

My first real foray into the Canadian medical system happened at 17 when I collapsed at home one evening and was in and out of consciousness as I threw up and lost all feeling in my face and limbs. I was rushed to the ER and went on to spend a solid decade having more episodes, undergoing tests and finally being diagnosed with a rare form of migraine.

At 18, I developed an allergy to animal protein that took eight years to properly diagnosis.

At 19, I started getting intense muscle cramps and had to undergo experimental testing to find the culprit. In the meantime, I was taking up to 10 pills a day to manage the pain.

At 27, I had half my thyroid removed after nearly five years of “inconclusive” biopsies found it was riddled with growing tumours.

Like so many others of my generation, I’ve never had a permanent job. I’ve never had health benefits or paid vacation days, let alone paid sick leave. Without medicare, I would be dead or homeless.

But that doesn’t mean medicare is flawless. Wait times are notoriously long. Family doctors are almost impossible to come by. We’ve privatized dental and eye care, and many patients can’t afford the physiotherapy or medication that would help them heal properly.

And yet we seem to always insist on setting the bar at “better than the U.S.” 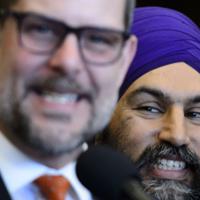 Finally, a Campaign Promise with Teeth in It

I support publicly-funded health care. I would lay my wretched body on the line any day to defend it. But criticizing medicare is not an endorsement of privatization. It’s a request that we demand better. We could develop a national pharmacare plan and invest in prevention. We could recognize foreign credentials and take advantage of all the talented people wanting to practice medicine in Canada. There are countless other ideas on the table that would improve our system while keeping it publicly funded. We’re in an election year. Let’s talk about it.

As I brace myself for another long road to recovery, worried how I’ll juggle physical symptoms and medical appointments with my life as a freelancer, I frankly don’t have it in me to take on this fight.

But I can’t help but wonder how much progress we could make in Canada if we spent less energy dunking on Americans and more energy demanding a better medicare system for ourselves.

Some of us don’t have time to wait.