You can learn a lot about a person by looking in their mouth. Money, class, where they grew up, their relationship with their parents — it’s all right there in their teeth.

It’s easy to tell if a person grew up in a nice part of town. If they had parents who monitored whether they brushed before bed or shelled out for braces.

I come from a long line of people with bad teeth. When I was little, my grandmother would sometimes take her dentures out to scare me and my sister. She’d knocked out her front teeth as a teenager by riding her bike face first into a brick wall. I don’t remember anyone in my family visiting a dentist, mostly because it cost too much money.

My grandparents weren’t alone in this. In the olden days, when you got married you got a new suit and had all your teeth yanked out, replaced with dentures. Both were supposed to last you a lifetime.

In the mid-1970s, our elementary school got a yearly visit from a travelling dental hygiene program. They handed out free toothbrushes and dental floss and instructed us on the finer points of oral care. One of the first things the nice lady did was make our entire class chew red tablets and then smile. The colouring adhered to the plaque in your mouth; the redder your teeth, the less you’d actually brushed them. I flashed a mouthful of fuchsia-coloured chompers and the entire class screamed.

There it began — teeth equal shame.

Poor people teeth, hillbilly teeth, whatever you want to call them, you can’t hide your heritage. It’s right there in the middle of your face.

Teeth have long been economic and social indicators, but as the next federal election approaches, they’re also a political issue. Polls suggest most Canadians want publicly funded dental care.

When the NDP introduced its new election platform earlier this month, it included dental coverage as part of an extensive new suite of health services. NDP Leader Jagmeet Singh proclaimed, “It’s time for the party that brought medicare to Canada to take another major step forward.”

The NDP’s New Deal for People promised head-to-toe care for all Canadians, including their teeth.

“One in three Canadians has no dental insurance and over six million people don’t visit the dentist every year because they can’t afford to,” the platform said. “Too many people are forced to go without the care they need until the pain is so severe that they are forced to seek relief in hospital emergency rooms. We know now that good oral health is a critical component of overall good health, and that means our health care system should cover it, too. A New Democrat government will work together with provincial partners, health professionals, and dentists to develop a roadmap to including dental care in the Canada Health Act.”

It’s a good idea, and if I wasn’t already planning to vote NDP, this could swing me over to their side. The Greens in their Vision Green platform say dental care is a “multi-year goal.” The Liberals and Conservatives still haven’t detailed their health platforms. But in January, when MP Don Davies asked if the federal government was planning on making any additional investments in dental coverage, the answer was a flat no.

The idea that teeth are somehow separate from the rest of people’s bodies and therefore not covered by medicare has always struck me as particularly strange. Teeth are some of the hardest working parts of the body. Necessary for eating, talking, biting jerks and removing beer bottle caps. Just kidding, but really, when your teeth go wrong, all manner of terrible things can happen.

Personally, I would rather endure labour pain than a bad toothache. I’ve had toothaches so agonizing they made death seem a better alternative. If you have money, you can fix the problem, but if you don’t you must suffer like a dumb beast.

Working in the arts for most of my adult life, I didn’t have a dental plan until very recently. I paid out of pocket when I could afford it. And when I couldn’t, I just tried to endure. A friend of mine used to refer to something he called freelancer’s teeth, reflecting the dental realities of people who went from contract to contract without access to extended health benefits. Things like pension plans, RRSPs and dental care fell by the wayside.

You can subject teeth to all manner of neglect and misuse, but they’ll eventually bite you in the butt. Often the people who need the most help are the ones who can least afford it. Combine poor diet, a lack of access to oral care, addiction issues and you have a recipe for a huge set of problems.

Mountain Dew Mouth has become a term dentists use to describe a state of oral catastrophe comparable to Meth Mouth. In certain parts of rural America things are so dire that dentists volunteer their services in remote areas and people line up days in advance. Remote area medical services was the subject of a documentary a few years ago. One of the saddest situations in a very sad film showed a woman in such pain from her teeth that she couldn’t even kiss her husband.

Teeth are built tough, made from some of the strongest stuff in the human body. When everything else has rotted away, they’re the last thing to go. But evolution did not design teeth to withstand a modern diet of soft food and refined sugar. After the Industrial Revolution, when table sugar became commonplace, so did cavities.

When things go wrong in your mouth, they go wrong all over your body. Gum disease is linked to heart issues, and even dementia. The pain, humiliation and debilitating long-term effects of bad teeth suck people’s will to change right out of their mouths.

Dentistry is expensive. As one grows longer in the tooth, a phrase which refers to the gum’s habit of receding, care can easily cost many thousands of dollars. Once you’re into periodontics, endodontics and major restorative work, the prices get even higher. A single dental implant can cost $5,000 or more. Gums are even worse. Procedures to deal with periodontal disease, like mining material from the roof of your mouth to graft onto your gums, can run cost $30,000 or more.

Even folk who have the means to pay for dental work — doctors, hip-hop stars and athletes blanch at the cost. In the immortal words of rapper Cardi B, “Got a bag and fixed my teeth, hope you hoes know that ain’t cheap.”

According to urban legend, Cardi B got a new smile after endless razing about the uneven state of her former teeth. The number of actors, models and famous people who fix their teeth the moment they make it is frequent tabloid fodder.

But for most ordinary folk, working teeth are not a luxury, but a means to operate successfully in the world.

When the Vancouver Sun’s Nick Eagland wrote a long piece about the possibility of including dental coverage in the Canadian health care system, it was so incredibly sad I had to read it in chunks. But the story also indicated that if there is sufficient political will and public pressure, things might actually change.

Don Davies, NDP MP for Vancouver-Kingsway, and B.C. Premier John Horgan have both called for major changes to the Canadian health care system. In an interview, Davies said, “I’ve long thought that dental care was a serious omission from our universal health care system that doesn’t make any sense from a public health or social justice point of view.”

I often dream that all my teeth have fallen out. According to dream theory, this means that you need to say something but cannot. I think maybe it’s my teeth whispering into my skull at night, hissing in tiny pale voices, “Fix us, or we’re going to kill you...”

A lack of money, shame or embarrassment should not stop you from visiting the dentist. But it often does.

The other day I visited my doctor, a powerhouse of a woman, smart, blond, slender as a knife, an alpha female in all respects. She pulled the side of her mouth open and showed me an expanse of pink gum. She’d recently had four teeth pulled after they’d cracked and broken. The new implants cost about as much as a down payment on a cabin at Whistler, she said. 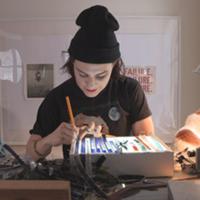 The Weirdest and Best Films in Canada Come Outta Winnipeg

I don’t know why, but this made me feel strangely better.

Age is great leveller, and at a certain point in life most people are going to run into dental problems. The question then becomes whether you can afford care.

And here’s where it gets political. If dental coverage can be extended equitably to all Canadians, another social barrier will fall. For myself, it would mean shedding the deep and abiding sense of shame, failure even, and freedom from an obvious indicator of bad decisions, poverty and a flawed gene pool. The very idea is liberating.

Public dental care would be another step towards a just and fair world, full of folk with strong white teeth, ready to bite off a chunk of the future and swallow it whole.