Earlier this week on The Tyee, Jim Hume lamented the “veritable army of young bloods with the voting power to swing most ridings” who failed to show up to the polls in the 2013 British Columbia election.

“The show of energy and responsibility by our future leaders is far from impressive,” he wrote.

It’s one of a few “remarkably interesting stories” that Hume says he found while perusing Elections BC data from the last election.

Well Mr. Hume, you want “remarkably interesting stories?” I suggest that you approach some young potential voters and hear what they have to say. We are a generation of values. We don’t respond to shame, particularly in the form of statistics.

Shaming youth with statistics isn’t helpful, because it doesn’t show any attempt to understand why young people aren’t voting and instead promotes the age-old trope of young voter apathy.

Congratulating “those on the north side of 50” for beating the youth in voter turnout and lamenting young people’s “lack of enthusiasm for elections” fails to address the problem.

When you use your media expertise and voice of experience to shame young people, you are enforcing the idea that their voices don’t matter. Politically engaged individuals need to actively ally themselves with young voters if they want to see change. 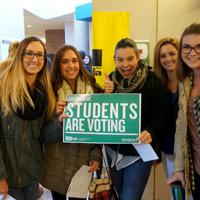 Indiscriminately championing British Columbians’ right to vote disregards the barriers young people can face in voting. This is not to say those groups have an excuse to disengage, but rather it helps to explain the “apathy” you decry.

Not only do youth often hold jobs that make it difficult to take time to vote, but young people have only seen education and health care programs slashed in our lifetimes. It is difficult for our generation to be hopeful about the democratic processes when we have not lived through the same cycles of government programs that older voters have.

Young people need reasons to “cherish voting rights,” and they need to believe that “future governance” will take their values seriously. There are youth-led campaigns across B.C. that are mobilizing to address this need.

Young Climate Voters BC, a coalition of university and college students, aims to help young individuals feel that they are part of a demographic that matters. Our campaign, Together for Tomorrow, reflects our belief that together, we can create change.

In our experience, the foundation of togetherness, and therefore of change, is value-based discussion to build trust and to inspire. The Together for Tomorrow campaign is built on face-to-face conversations that aim to identify key values or concerns.

Connecting with people on a person-to-person basis, rather than shouting down from above, allows for an exchange of concerns that can help potential voters understand that their values matter and that voting is a worthwhile way to represent them.

Personally, I can recognize the productivity in these conversations, because I know that as a young person — as any type of person, actually — I appreciate the chance to feel heard. I appreciate the chance to discuss issues that matter to me because, contrary to popular belief, there are many issues that do matter to me, and to many other young people.

We understand that parties must prioritize their campaigning based on their support in certain demographics, and we understand that the quantitative data of polling enables them to do so. Journalists, however, are not limited to an examination of polling data in their understanding of voter engagement.

Statistics paint a broad picture of voters, but if the data is not balanced with perspectives born of personal engagement with young potential voters, there will be gaps in the analysis.