[Editor's note: Steve Burgess is an accredited spin doctor with a Ph. D in Centrifugal Rhetoric from the University of SASE, situated on the lovely campus of PO Box 7650, Cayman Islands. In this space he dispenses PR advice to politicians, the rich and famous, the troubled and well-heeled, the wealthy and gullible.] 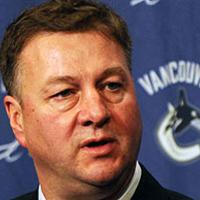 Let me be clear -- the World Cup has not turned me into a giant, loathsome couch slug. Far from it. Last Sunday I put on pants, brushed my teeth, and went outdoors for 15 minutes between games. When Holland's Robin van Persie headed in that amazing goal against Spain I leapt to my feet and screamed, probably burning several calories. And thanks to modern technology I can pause the action for bathroom breaks. Grandpa still prefers to use an old peanut butter can, but he's a traditionalist.

The problem is I'm wracked with guilt. No, not about the cat -- I've left the fridge door open so she can find her own food. It's just that as a football fan I feel I am part of the problem -- the FIFA problem.

I am afraid I am enabling a vast, corrupt apparatus that has attached itself to Brazil like the Alien on John Hurt. FIFA president Sepp Blatter and his minions are a truly scuzzy bunch busily sucking up Brazilian resources and keeping the profits, as John Oliver so eloquently described on his HBO show Last Week Tonight.

Should I stop watching? I mean hypothetically, if such a thing were possible.

Seated for the Duration

Yes, it's the old Vatican Syndrome -- marvelling at the glorious wonders of St. Paul's and the Vatican Museum (or for that matter any of the fabulous cathedrals of Europe) and trying not to think about how all that splendour came to be.

Thinking about the skulduggery of FIFA -- bribed refs in South Africa, overspending in Brazil, worker deaths in Qatar -- then seeing the likes of van Persie or Lionel "The Flea" Messi creating physical poetry on the pitch; it can create serious cognitive dissonance. Like heading a solid gold soccer ball (a favourite FIFA party game), it can mess with your mind. But there are ways to alleviate your footie guilt.

Give thanks for Brazilian sacrifice

Many First Nations cultures hold ceremonies after a successful hunt in which they give thanks to the spirits of the animals they have killed. In a similar vein, you could give thanks to the people of Brazil for sacrificing a portion of their health care and social safety net to FIFA and the World Cup. Perhaps if you have a spare tube of Polysporin kicking around the medicine cabinet you might donate it to the Red Cross, and it might then find its way to a Rio de Janeiro clinic. Conscience, quiet your incessant harping.

But damn that FIFA, they do have a great product. The action has been mostly fabulous so far, and as usual there are many fascinating little details. During the Italy-England match it was revealed that the Italians are wearing self-massaging jerseys. If Peter MacKay hears about that funny business, we'll see preventative legislation tabled in the House lickety-split. Seeing the nifty spray cans referees now carry to lay down free-throw lines, I am hoping one of them turns out to be Banksy. And although thus far the jungle stadium in Manaus has yet to see a player-python encounter during game action, it's early days yet.

The World Cup is an exciting event. As with the Olympics, it is the organizational corruption and waste of resources that cause issues. So here's an idea: Let us do it. Make Canada the permanent home of the World Cup. What could possibly go wrong?

Let's face it, when it comes to the planet's ultimate football tournament Canada is neutral territory. I know, we all have hopes. But if Team Canada can't get traction in the sad-sack CONCACAF region, it's a sure sign we are not likely to be a national force in the beautiful game for the foreseeable future (on the men's side anyway). Canada's ranking in men's soccer is roughly equivalent to our global reputation for pineapples. These days Canadian players need Dutch or Bosnian parentage to play in the big show. All the more reason why we should host. No home field advantage here.

Keeping it in Canada would take the corrupt FIFA awarding process out of it. As it is, the 2022 tournament was handed to Qatar. However, there's always a chance oil will be discovered on Venus and the tournament will subsequently take place in an atmosphere of 96 per cent carbon dioxide with game time temperatures of 462° Celsius (unless it's a hot day).

Canada has some existing facilities -- next year's Women's World Cup in Vancouver ought to prove we can do a fine job. Next step: we refuse admittance to FIFA president Sepp Blatter at the airport, and get some justice into the system so World Cup revenues are used to fund the World Cup instead of padding the FIFA bank account. That ought to help us break even and tourism bucks could compensate for any shortfall.

With Canada as permanent host, the world will enjoy the pinnacle of football competition guilt-free. We can get started as soon as Peter MacKay introduces that Anti-Self-Massaging-Jersey Bill.

In the meantime, if you have any messages for the outside world I'll be glad to pass them along. Talk to you July 14.