[Editor's note: This is the eighth of The Tyee's Inspiring Ideas for 2013 series, running weekdays through Jan. 1 and collected here.] 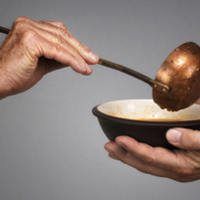 Now that this year's CBC's Food Bank Day in B.C. is over surely it's time to rethink this annual event stretching back more than 25 years. In light of persistent and growing hunger in our affluent province, there's a compelling argument to reconsider our national broadcaster's decades long public support for charitable food banks. This year the CBC raised a record setting $567,085 to be distributed to food banks across the province. In appreciation, CBC studios in Vancouver, Victoria, Kelowna, Kamloops and Prince George opened their doors to donors, of whom 5,000 in Vancouver met national and local broadcasting personalities, billed as stars, including Peter Mansbridge and George Stroumboloupoulos, the first Canadian Ambassador Against Hunger for the United Nations World Food Program.

A fun time to be sure, not bad for the ratings and all for a very good cause. What's not to like?

Back in 1985, a CBC producer in Halifax explained his corporation's support of a benefit concert for a Cape Breton food bank. "We want to draw attention to the situation these people are in. We want to raise some money for the food bank as well as show that the CBC does care about its broadcast community. And, not least, it's to provide 90 minutes of first class entertainment." Today this sentiment has changed little, though the promotion is now polished and fully professional with much pre-event on air advertising.

To question the CBC's support of food banking, especially at this time of the year, invites a brisk rebuke. Is there not a moral imperative to feed hungry people? Shouldn't we all be backing this expression of corporate social responsibility and practical compassion? Important questions, yet how appropriate is it for our national public broadcaster to promote food charity as an effective response to widespread food poverty when research evidence points in the opposite direction?

Ranks of the hungry keep growing

Consider the following. After 30 years of charitable food banking, the numbers of hungry people in B.C. and across the country keep on climbing. The Greater Vancouver Food Bank was set up in 1982, followed a year later by Victoria's Mustard Seed. Today within the province there are 93 food banks feeding 96,150 people a month. Nearly 2,000 food banks across the country feed close to 900,000 people each month, though research shows that many of the 2.5 million food insecure Canadians who are hungry do not use food banks. Even Food Banks Canada acknowledges it cannot keep pace with the demand with more food banks restricting food handouts, buying more food than usual, closing early or running out of food. Of course one may say this is precisely why we need the CBC to remind us of our individual responsibility to feed the hungry poor. Yes, $567,000 is a lot of money but with 96,000 individuals dependent on BC's food banks it amounts only to a donation of six dollars per hungry person -- a loaf of bread but little more.

The problem is that food banks have become the publicly accepted way of meeting this basic human need, with the CBC over the years fostering this widely held perception. How has this come about when food poverty remains deeply entrenched and widening income inequality, grossly inadequate welfare benefits and social program cutbacks highlight the continuing failure of public policy and government accountability for addressing domestic hunger?

Since the mid 1980s, the CBC along with the private media, the food, finance and transportation industries, professional sports -- NHL teams but most notably the CFL through its televised Tackle Hunger program -- rock musicians and schools have slowly succeeded in socially constructing the issue of hunger as a matter for charity. It is now the norm with the CBC's annual food bank drives playing a crucial role in shaping this public attitude.

Yet reliance on food charity undermines and prevents our understanding hunger as a political question and access to food as a fundamental human right, the collective and legal responsibility of elected government. Governments are enabled to look the other way and neglect their obligations under international law, ratified in 1976, to 'respect, protect and fulfill' the human right to adequate food and nutrition. Public accountability is forgotten. We have hunger in B.C. and Canada today because governments find it easier to leave the meeting of basic human needs to charity, a task far beyond its limited and ad hoc capacity to solve despite the best efforts of corporate Canada. Institutionally the CBC actively endorses this sad neglect of public policy and political will.

If the CBC really is troubled about hunger, why does it not campaign for adequate welfare benefits, the living wage, affordable housing, national child care and a rebuilt social safety net? Why not spend a day making the case for the right to food? Another swift rebuttal, perhaps rightly so. Such advocacy would be deemed highly political, ideologically partisan, contrary to the CBC's mandate and governments would be up in arms. Yet the CBC's advocacy in championing food charity before public action and government accountability is itself a political act and likely crossing ethical journalistic boundaries. When you've taken sides and become the news, how possible is it to be an independent and unbiased broadcaster serving the public interest by reporting alternative policies and programs?

Regrettably the charitable food bank industry has become an obstacle to addressing hunger in B.C. and Canada. Giving away increasing amounts of surplus processed food or fresh healthy food will not solve the hunger problem. This simply acts as a moral safety valve and adds to our collective complacency.

If overcoming food poverty is the goal, hungry people require adequate purchasing power to go into a store like anyone else and buy the foods of their choice. Why not income security, a rebuilt social safety net and a Poverty Reduction Plan for B.C as the focus of next year's CBC Right to Food Day?

Dear readers, you may notice that comments are not enabled for this story. In what has become a Tyee tradition, we're closing the commenting system for the holidays. Thanks for all the insightful and informative comments in 2012. We look forward with happy anticipation to more of the same in 2013.