Like many other provincial governments, British Columbia has poured unprecedented resources into responding to the COVID-19 pandemic, and it will be years before the province’s finances get healthier.

That was one of the observations Premier John Horgan made in a 20-minute year-end interview with The Tyee.

In most years the budget is set in February, then the government lives within it. During the pandemic, the $60 billion the B.C. government had planned to spend grew by another $10 billion with the support of all three parties in the legislature.

“The system operates on a yearly cycle that’s pretty formulaic,” Horgan said. “This year all of that went out the window, and the system responded by infusing dollars for people, businesses and communities in an unprecedented way.”

Despite vaccinations becoming available and offering hope, the pandemic will continue for some time. Recently Finance Minister Selina Robinson said it could be 2022 before the tourism sector recovers and the economy gets back to where it was before the pandemic.

So how far is the province from returning to balanced budgets?

“A good distance I’m afraid,” Horgan said. “My expectation is we’re in this deficit scenario for some time and that’s basically what the private sector is saying as well.”

Last February’s budget was balanced, and the three-year economic and fiscal forecast was positive, he said. “All of that’s just gone.”

There are positive signs, with unemployment rates trending downwards and the province continuing to receive a top credit rating. But the economy continues to shrink, and the coming year is unlikely to be as robust as people would have hoped, Horgan said.

When the government releases the budget, delayed this year until April 20, it will include a three-year plan, he said. “The virus is unpredictable. So is the economic recovery.”

Another bright spot in that recovery is the high price for lumber, a benefit for a province that remains a major supplier of the material.

But Horgan is quick to point out the need to manage the industry carefully. “We need to make sure that as forestry recovers, we’re recovering not just by pushing out more volume, which has been the traditional response to high prices, but adding more value.”

In September, the government released the report A New Future for Old Forests and announced it would defer old-growth logging of 350,000 hectares and protect 1,500 giant trees.

Horgan’s mandate letter to Katrine Conroy, the new minister of forests, lands, natural resource operations and rural development, instructed her to work towards protecting “more” old growth, without specifying how much, where or when.

“We now have to go about implementing the recommendations, and that involves engaging with stakeholders, that’s workers, companies that have tenure, and also most importantly with Indigenous peoples who have rights and title,” Horgan said, noting there are many pockets of old growth that deserve protection, including in his Langford-Juan de Fuca constituency.

“There are many Indigenous communities that very much want to protect and preserve their territory, but there are also many, many who want to do sustainable forestry,” he said. “We need to make sure we’re finding that balance, and those discussions don’t happen overnight, and they involve multiple stakeholders.”

It helps to have a four-year mandate to allow for that dialogue, he said.

The relationship with Indigenous people in the province saw highs and lows during the government’s first term.

A little over a year ago, it passed legislation to recognize the 46 articles of the United Nations Declaration on the Rights of Indigenous Peoples in the province’s laws.

Then a decision to allow a natural gas pipeline through Wet’suwet’en territory brought condemnation from Hereditary Chiefs and multiple arrests of people defending the land.

Supporters across the country took numerous actions, including blocking access to the B.C. legislature on throne speech day and closing major railway lines.

So, in Horgan’s view, what’s the state of reconciliation today?

“It’s different in different communities,” the premier said. “Certainly, the First Nations Leadership Council who we worked with on the declaration still remains focused and committed to the work we’re doing together.”

The work has been delayed while the province addresses the COVID-19 pandemic, he acknowledged, and he observed that the pandemic had also made it more difficult for the Wet’suwet’en to have needed internal discussions around governance.

“If you keep talking, you’ll find points of commonality and that’s where agreement can be reached,” Horgan said. “I remain very, very proud and committed to the declaration, but I’ve said from the beginning this is not a magic wand.”

The declaration doesn’t change 200 years of colonialism in the province, nor does it quickly undo the economic inequality between communities or relieve the poverty many face, he said. “This is the beginning of a dialogue that will try to bring justice, economic and social justice, to B.C. and Indigenous communities and the vast majority of Elders who have been working on these issues for a long, long time get that.”

No doubt there are activists, including those at the legislature earlier in the year, who want action to be faster, he said. “Having been an activist and a young person not that long ago, I understand that, and I respect that.”

Site C and BC Hydro rates

Another outstanding piece of business for the government is the construction of the Site C dam on the Peace River.

The dam has long been opposed by some First Nations in the region. And recently acknowledged geotechnical issues had the government admitting in July it was “very concerned.”

The government appointed former deputy minister Peter Milburn to review the project but continued with construction, despite calls to stop immediately and have the project reviewed by someone more independent and with more related expertise.

“Milburn is an engineer and there are other independent engineers looking at that,” he said.

The government had not yet received Milburn’s report but was expecting it any day, Horgan said. After that it will go through various reviews within government before it’s made public. “I suspect it will be late January, February, before we have a clear idea of what the status of that project is.”

BC Hydro has already spent some $6 billion on the dam and has acknowledged there will likely be overruns on the budget of $10.7 billion. That budget, set when the government decided to continue with Site C in 2017, is significantly higher than earlier estimates.

So why hasn’t he followed through on that in government?

“We did a whole bunch of initiatives through COVID to reduce Hydro costs for people,” Horgan said. “We completely upended the 10-year plan that the Liberals had put in place that would have seen consistent and persistent rate increases above inflation, so I think we have bent the curve on rate increases.”

The BC Utilities Commission is looking for ways to reduce electricity costs for vulnerable populations, he added. There was a relief program offering credits to people and small businesses hit hard during the pandemic, but so far nothing more permanent. 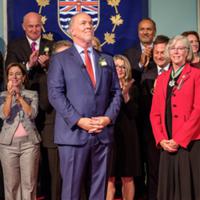 John Horgan on Site C, LNG and the NDP’s Three Years in Power

“It’s not as cut and dried as I made out in opposition,” Horgan said. “I would have wanted to continue pushing on that, but I know Bruce Ralston is seized of the challenges as the minister and he will take forward initiatives through Hydro and the commission to try and find ways to reduce costs for those who are on fixed incomes.”

While other Crown corporations, particularly ICBC, have demanded more of the government’s attention, help for vulnerable BC Hydro customers hasn’t been forgotten, he said, adding it’s an area where the response to the pandemic has given an idea of what’s possible.

“That’s one of the things we need to carry forward,” Horgan said. “OK, if we responded rapidly in this scenario, what about, as we come out from COVID, how do we deal with the residual impacts of people who’ve been dislocated because of their unemployment or reduced employment or whatever it may be?”

With a majority government and a mandate to govern until 2024, whether those good intentions are acted on is entirely up to Horgan and his team.