The speech from the throne was overshadowed Tuesday as supporters of Wet’suwet’en hereditary chiefs fighting construction of a natural gas pipeline on their territory blocked entry to the British Columbia legislature and rewrote the day’s agenda.

“We are here because Canada and British Columbia insist on using force to push their way onto Indigenous lands without consent,” Kolin Sutherland-Wilson told The Tyee in an interview.

A member of the Gitxsan Nation, Sutherland-Wilson is with the Indigenous Youth for Wet’suwet’en who have been blocking the ceremonial door on the front of the legislature for much of the last week.

On Tuesday hundreds of supporters joined the group, blocking all the doors to the building and chanting “stand with us” and “shame” at people coming to the building.

Red dresses, a symbol of missing and murdered Indigenous women and girls, hung from wires over the legislature’s front steps. The smell of smoke and sage from a ceremonial fire wafted over the crowd.

The action led to the cancellation of the ceremonies that normally take place outside the legislature on a throne speech day, including the lieutenant governor’s entry through the ceremonial door. The morning legislative session was cancelled, as was a planned news conference with Premier John Horgan.

Since Thursday the RCMP have made 28 arrests as they enforced a court injunction and cleared three camps on the Morice West Forest Service Road west of Houston.

The camps were in support of Wet’suwet’en hereditary chiefs opposed to the construction of the Coastal GasLink pipeline to bring gas from the province’s northeast to the LNG Canada plant in Kitimat on the coast.

Supporters acting in solidarity with the Wet’suwet’en have shut down roads, ports and railways in B.C. and across the country.

Kukpi7 Judy Wilson, secretary treasurer of the Union of BC Indian Chiefs and chief of the Neskonlith Indian Band, said the fight against the pipeline will continue.

“If it’s allowed to happen in Wet’suwet’en, it will happen in your own backyard,” she said, speaking on the steps of the legislature.

Supporters of the Wet’suwet’en are honouring the nation’s hereditary laws, she said, noting that the 1997 decision in the Delgamuukw court case was clear in its recognition of title and of the hereditary chiefs’ system of governance.

“There is no confusion on who the rightful proper title holder of that territory is. They just need to go back and read that court case,” Wilson said. “They just don’t want to recognize it because they want to recognize profits before people.”

UBCIC Grand Chief Stewart Phillip said the province is at a watershed moment.

Taking his turn at the microphone, Sutherland-Wilson told the crowd it’s time to resist.

The processes playing out in the province have been the same for hundreds of years, he added. “When we peel back the thin veneer of Canada’s rule of law, you begin to see the ugly face of colonialism.”

The throne speech, delivered by Lt.-Gov. Janet Austin but written in the premier’s office, stressed that the province was in bad shape when the NDP came to power in 2017 and included reminders of government action on housing affordability, child care, health care, eliminating medical service plan premiums, raising the minimum wage and more.

“It’s been two and a half years, but the hard work has only just begun,” it said. It included promises to raise the minimum wage to $14.60 in June and to $15.20 by 2021, reduce vehicle insurance premiums by 20 per cent and act on the recommendations of the Rental Housing Task Force.

A section on reconciliation with Indigenous peoples said it “is a matter of rights, respect and justice. It is a journey we are on together. And it must last for generations.”

BC Liberal Leader Andrew Wilkinson criticized the speech for lacking an agenda to move the province forward and criticized Horgan and the NDP for allowing the situation with the Wet’suwet’en and their supporters to develop.

“John Horgan is the head of government in British Columbia, responsible for the rule of law, and yet when our roads are blockaded, our ports are obstructed, when you can’t even get in the legislative building, he’s nowhere to be seen, he runs away from the media and he hides in his office behind a police blockade,” Wilkinson said.

“This should have been addressed two years ago with a clear and mandated approach to resolving the situation,” he said. “Instead we had NDP cabinet ministers, NDP MLAs, out there saying the rule of law doesn’t apply in parts of this province and this [is] the result.”

Horgan released an emailed statement saying people have the right to peaceful protest and the government supports the exercise of their democratic rights as long as they act within the law.

The government has made efforts to resolve the situation, including sending Indigenous Relations and Reconciliation Minister Scott Fraser for two days of meetings in February and engaging in discussions with the Wet’suwet’en hereditary chiefs.

“We are also engaged in ongoing reconciliation discussions, which are focused on rights, title, self-government and self-determination,” Horgan said. “Those channels of communication remain open.”

The government made the commitment to reconciliation in good faith and intends to see it through, Horgan said, noting it is a shared journey. “The Declaration on the Rights of Indigenous Peoples Act passed the legislature with a unanimous vote. Our work here has not ended — it has just begun.”

Green Party interim leader Adam Olsen, who entered the legislature under a police escort, said it’s “devastating and heartbreaking” to see where the government’s decisions on LNG Canada and Coastal GasLink have led. 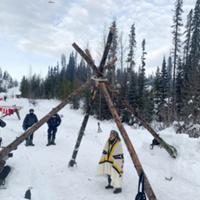 “This project that we voted against 14 times, we were very clear this was a potential outcome of it, and I think the decision that’s been made has been made and it’s the responsibility of this government to address it.”

A member of the Tsartlip First Nation on Vancouver Island, Olsen said it was particularly tough as an Indigenous person to be called out by opponents of the project.

“I know what I did,” he said. “I know the actions that I took to try to stop the project that is ultimately being protested right now. I’m fine with my role in that.”

Olsen said he would continue to use his position and voice in the legislature to speak strongly about the situation playing out across the province. “This is part of the colonial legacy of our province. We’ve seen it play out. The time for this sort of confrontation should have been over and unfortunately we’re still facing it.”

While he respects the role for protest, he said, “it’s a surreal day for me today, that’s for sure.”