What’s NDP Leader John Horgan learned in three years as premier? For one thing, that it takes longer to get things done than the notoriously impatient politician would like.

“Having been in government I knew that things move slowly, [though] not from a lack of effort from the professional public service,” said Horgan, who held various staff jobs in 1990s’ NDP governments.

“As the premier I’d hoped things had changed over the 16 years. But they hadn’t.”

Horgan became premier in 2017, forming a minority government with support from BC Green Party MLAs after 16 years of BC Liberal rule.

When he came to office the public service had been hollowed out, with decision-making centralized in the premier’s office under the BC Liberals, he said, arguing that over many years there had been a decline in respect for teachers, health-care workers and the professional public service.

Now on the campaign trail seeking re-election, he’s talking up what was accomplished with a minority government and setting out what he would like to do with a majority. He’s also taking every opportunity to remind voters where he feels the BC Liberal governments fell short over 16 years in power.

“Rich people got a massive tax break and health-care workers got fired, child-care programs were cut, schools were squeezed,” he said. “Those things started to pile up.”

Horgan contrasted the BC Liberal record with his own commitment to value public services and trust people to do their jobs, giving the example of provincial health officer Dr. Bonnie Henry, who has been the lead on the province’s response to the COVID-19 pandemic.

“I saw my colleagues across the country, premiers, take a different approach, elbowing health officers out of the way so that they could be on television,” he said. “I don’t need to be on television. I need to make sure British Columbians are comfortable.”

He said he’s pleased with his government’s effort to restore a sense of pride and purpose in the public service, but allowed that, with the exception of some of the pandemic measures, getting things done still feels like it takes too long.

“I would just like it to happen faster because that’s just a natural human condition, I think.”

In his time in politics, Horgan has made a virtue of being impatient. Where opponents have sometimes painted him as hotheaded or easily frustrated, he’s said he’s driven by a passion to get things done.

And in three years of minority government, there has been progress, he said.

“I’m proud of the way we’ve been able to work with Indigenous communities,” he said. “I’m very proud to have five Indigenous candidates on our ticket in this election. I think that speaks to leaders in communities looking to us to show the way forward where we can have an economy that works for everybody, not just investors, but workers, communities, Indigenous and non-Indigenous.”

Another area he highlighted was child care. The government had already been working on improvements when the pandemic made it obvious how important child care was as both a social and an economic issue, he said.

“The public saw quite clearly that our economy depended on making sure frontline workers had access to child care, and that’s transformed how we look at these programs.”

An NDP majority would be even more aggressive in creating new and affordable child-care spaces, he said, speaking to The Tyee the day before the party released its full platform.

Green Leader Sonia Furstenau has said the government’s approval of the LNG Canada project, and the subsidies it has committed to help make it happen, puts a massive hole in its climate plan.

According to Horgan, the emissions from the project can be added without blowing the province’s targets. “LNG Canada fits within the plan. That’s why we agreed to it,” he said, noting that former Green Leader Andrew Weaver and the Green caucus played a critical role in developing the CleanBC climate plan, which he characterized as the best in North America.

At the same time LNG Canada will create jobs and bring a large private sector investment, one that will support small construction companies, many in Indigenous communities, he argued.

Horgan also said he believes the emissions can be balanced out by making reductions elsewhere in the province. “Electrifying the gas fields, for example, takes pressure off the emissions that would come from the liquefaction process.”

Another major decision that alienated many past NDP supporters was to continue building the Site C dam on the Peace River. Horgan said it was without doubt the most difficult decision his government made. 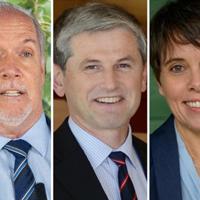 “We looked at it from 19 different directions and came to the conclusion that a $4-billion hole was not the way we should start our minority situation,” he said. The figure is based on the BC Utilities Commission estimate that cancelling the project in 2017 would mean writing off the $2.1 billion already spent plus $1.8 billion in site remediation costs. Others argued remediation could cost much less.

“The Liberals would have feasted upon that. I’m not suggesting it was a political decision in that sense, but that was a factor to be sure, and we just felt that taxpayers should not, would not, listen to us about other issues if they saw the first act that we undertook was to burn $4 billion for no good reason.”

Horgan said he hopes those who were opposed to the decision will balance it against other issues the government has made progress on, whether it’s social justice, climate action or working towards protecting old growth forests.

“I think those types of actions are bringing back those supporters who were disappointed about one industrial project or another one,” he said.

*Story corrected on Oct. 12 at 3 p.m. to correct the name of the former lieutenant-governor.