As British Columbia announced a record number of new COVID-19 cases Thursday, the NDP took aim at a BC Liberal candidate who appeared to signal support for a pandemic conspiracy theorist.

Press Progress reported Wednesday that Nechako Lakes MLA John Rustad had responded positively to an email from Tony Mitra, a Vancouver-based conspiracy theorist who has written many letters to government officials decrying COVID-19 as a hoax.

One of those letters, sent to every MLA in May, claims the public is “hypnotized by fear as the government, in collusion with an extremely biased media and overbearing influence of big Pharma and global corporations feed the flame of fear.”

Mitra’s letter says COVID-19, which the World Health Organization declared a pandemic in March, is a “bogus virus” and “no different from seasonal flu.”

“You have helped destroy free speech, subvert science and now are engaged in destruction of British Columbia, to turn it into an outlying protectorate of BILLGATISTAN,” the letter says, referencing multi-billionaire Bill Gates, whose investment in COVID-19 research has made him a target for those who deny the virus’s severity.

Mitra reported in a June 1 blog post that two Liberal MLAs responded to the letter — both from northern ridings, but with very different takes on B.C.’s pandemic response.

Rustad responded the following day, thanking Mitra for his email and noting that while he doesn’t usually reply to bulk emails or those from outside the constituency, “in this case, I felt compelled to respond.”

“The freedoms we have as a society should be one of our most cherished possessions. During this serious COVID-19 pandemic, those freedoms have been significantly restricted. And I can tell you that I am advocating for the removal of those restrictions as quickly as can be,” Rustad replied.

“The social and economic damage that has been done is enormous and both federal and provincial governments have not seemed to have done any type of analysis to determine what those impacts are.”

He closed by saying that, as an opposition MLA, “I look forward to holding the government to account for their choices.”

Shirley Bond, who is running for her sixth term as Liberal MLA in Prince George-Valemount, offered a more measured response, which Mitra described as ignorant and arrogant.

“I believe that British Columbia is in capable hands with our provincial health officer Dr. [Bonnie] Henry,” Bond said. “British Columbians have worked hard to flatten the curve and our outcomes demonstrate that. We will continue to follow the advice of our health-care professionals as we advocate and support a balanced and appropriate economic recovery plan.”

In a news release Thursday, the NDP claimed Rustad had earlier “retweeted a video of Elon Musk with the title ‘the entire death count is a provable lie.’”

Anne Marie Sam is Rustad’s NDP opponent in Nechako Lakes. In an emailed statement, Sam, whose home community of Nak’azdli First Nation experienced more than a dozen cases and lost an Elder to COVID-19 last month, said she is deeply concerned by the Liberal candidate’s comments.

“John Rustad’s support of COVID-19 conspiracies puts people at risk,” she said. “In the midst of a pandemic where health-care workers, teachers, long-term care staff and others on the frontlines are doing everything they can to keep us all safe, their efforts are undermined by comments like this. We are all in this together and communities across Nechako Lakes have worked hard to keep us safe.”

Sam’s cautious approach appears to set her apart in the Nechako Lakes riding, where all four other candidates have called for lifting pandemic restrictions. During an all-candidates’ forum earlier this month, Christian Heritage Party candidate Dan Stuart went so far as to call the pandemic a “scam.”

“We’ve got a virus, which is called fear, and the government, the media, everybody needs to get back on track and make people understand that it’s not something that is going to march down the street and kill you,” said Stuart, who has also pushed vaccine conspiracy theories.

“You might get sick and you might not. But everybody locks themselves in their house, gets behind a mask and breathes their own germs. What’s the point?… Get rid of the fear and businesses can get back to business.”

News of Rustad’s response came the day after BC Liberal Leader Andrew Wilkinson indicated that his party would take a greater role in the public health response to the pandemic.

“When we see a wide range of different approaches toward the pandemic around the world, I like to think that somebody with an MD like me can look into that and say, ‘What’s the best for B.C.,’ and work with Dr. Henry to see what’s the best for B.C.,” he said. Wilkinson practised medicine briefly in the 1980s.

The Tyee reached out to Rustad and the BC Liberals for comment but did not get a response by publication time.

“We will act boldly, decisively and immediately to protect and improve your livelihood, and the health and well-being of all British Columbians,” it says.

It includes establishing a pandemic response committee to work with all parties and the provincial health officer on a “collaborative approach to managing the pandemic” and accelerating provincial aid to those impacted by COVID-19.

Until Premier John Horgan called a snap election last month, B.C.’s elected officials have been credited with their non-partisan response to the pandemic. “We need to work together to fight the virus, not each other,” has been a catchphrase of Wilkinson’s. 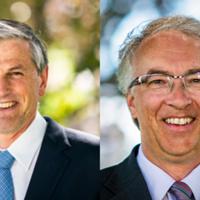 How Climate Change Divisions Threaten the BC Liberals

In an emailed statement, the BC Green Party said it is committed to following the advice of public health officials and working across party lines to keep British Columbians safe.

“Dr. Henry and our public health officials have served us dutifully through the pandemic,” it said. “Listening to them means we are following science and evidence which is crucial in a crisis like this one.”

On Thursday, provincial health officer Dr. Henry reiterated that the risk from COVID-19 is provincewide, with social gatherings a prime cause of its spread.

“While many of these cases are concentrated in the Lower Mainland, the cases connected to events have spread right across this province,” she said. “You may think the risk doesn’t apply to you because you live outside the Lower Mainland... but COVID-19 knows no boundaries and impacts us all. This virus affects people and when people move, we take our risk with us. We have seen that spread to all parts of our province.”