Two weeks ago, recent high school grads Naia Lee and Rebecca Hamilton organized a group to hit the streets of North Vancouver. They weren’t gathering to socialize — instead, masks on, they were parked outside federal Environment and Climate Change Minister Johnathan Wilkinson’s office, renewing their call for increased action on climate change.

The date was significant: Sept. 25, close to the anniversary of last year’s landmark global climate protests.

“It was definitely a different experience from the feeling of having tens of thousands of people flooding the streets of Vancouver,” said Lee, a 17-year-old activist and member of the Sustainabiliteens, a formidable movement of young people across the region in support of climate justice.

Ahead of the B.C. election young people are calling for swift, sweeping action on the climate crisis. They’re not the only ones. The issue is top-of-mind for many voters, with the particularly fresh memory of devastating forest fires that made Vancouver’s air quality the worst in the world for several days in mid-September.

An Environment and Climate Change Canada report in April 2019 warned that Canada is warming at twice the rate of the rest of the world. In B.C., there are more species at risk of going extinct than anywhere else in the country due to worsening biodiversity.

The province still does not have a stand-alone endangered species law, which the NDP government promised in 2017. And according to a provincial climate risk assessment, B.C. could see weather consequences at a “catastrophic” level in 30 years.

The actions taken now will decide whether that is possible, experts say.

“The important context is that this is an emergency,” said Kathryn Harrison, a University of British Columbia professor who studies environmental, climate and energy policy. “Everybody needs to be acting urgently to get started now, and put ourselves on a path to net-zero. And that’s true of every Canadian province.”

B.C. has long been an innovator on climate policy — the carbon tax was first introduced to North America by former BC Liberal premier Gordon Campbell in 2008. The tax on carbon dioxide equivalent emissions started at $10 a tonne and was scheduled to rise by $5 per tonne per year. It applies to the purchase and use of almost all fossil fuels in B.C., about 70 per cent of the province’s carbon pollution, and is meant to encourage low-carbon investment and innovation.

The carbon tax was frozen in 2013 by former BC Liberal premier Christy Clark for five years. It increased most recently on April 2019, from $35 to $40 per tonne of carbon dioxide equivalent emissions.

Harrison cautioned that the government will have to proceed with an “emergency mindset” if we can ever hope to meet our 2030 and 2050 climate goals.

The pandemic has proven tricky for leaders wanting to make aggressive promises on tackling climate change while balancing a struggling economy and voters’ priorities. Here’s where the parties stand, and what experts say about the platforms.

In late 2018, under Premier John Horgan, the NDP government released its CleanBC plan, which provided a framework for the government’s emissions goals and integrated climate policy with economic growth. The plan was backed by the BC Greens.

The NDP’s election platform is based on most of the policies in the CleanBC plan: having all new vehicles hit zero-emissions by 2040; support for better buildings and home retrofits; public infrastructure upgrades for remote communities; and more.

“The NDP, on climate, is essentially running on its track record with the CleanBC plan,” said Harrison. “And that’s encouraging in some respects, but there’s gaps in others.”

Ambitious, but not ambitious enough, Harris explained — CleanBC is projected to get B.C. only 75 per cent of the way to its 2030 climate targets.

Experts say interim targets would be a valuable way to ensure the province is on track. (Starting this year, the government will begin detailed reporting to the B.C. legislature each year under the new Climate Change Accountability Act, which legislated targets for reducing greenhouse gas emissions and instituted an independent advisory committee and detailed annual reporting to the legislature.)

Cam Fenton, leader of the Canadian arm of 350.org, an international movement working towards the end of fossil fuels, believes there is too much emphasis on the carbon tax and not enough on the other policies that could contribute to a cleaner economy.

“I think the carbon tax in general is something that takes a lot of the oxygen out of the room about the real conversation about climate change,” he said.

“What I would much rather focus on is ending fossil fuel subsidies,” he said. The government currently subsidizes the fossil fuel industry to the tune of $1 billion a year, second only to Alberta, according to a September report from Stand.earth.

Liquefied natural gas projects will make it difficult for B.C. to meet its climate goals. The $40-billion LNG Canada project in Kitimat — possibly the biggest private infrastructure project in Canadian history — will produce emissions that will leave B.C. with no chance of meeting its targets, according to a July report from the Canadian Centre for Policy Alternatives.

More than one-fifth of B.C.’s total emissions come from the oil and gas industry. Critics have said the NDP’s support of the Site C dam project, which will help electrify the LNG and fracking industry, shows the government’s hypocrisy on environmental issues.

Kai Chan, a professor at the Institute for Resources, Environment and Sustainability at UBC, said LNG is promoted as a clean fossil fuel.

“It’s misleading hugely in that respect,” he said. There’s a perception that LNG is better than coal, he said, but not enough is known about the effect of gas leaks, which remains a mystery.

The BC Green Party, which released its full platform Wednesday, has repeatedly stressed the importance of ambitious, environment-first policy and full transparency. It contributed heavily to the NDP’s CleanBC plan and subsequent policies as a partner in the minority government.

The Greens previously put out a blueprint for their vision of a clean economic recovery from COVID-19, which includes a transition program for workers in the oil and gas sector, the creation of thousands of jobs in climate adaptation and restoring B.C.’s natural assets. Their platform emphasizes this clean recovery plan — they promise a “just transition for workers and a $1-billion innovation fund to shift to a zero-carbon economy.”

Of B.C.’s $1.5-billion COVID-19 economic recovery package, the Greens want at least $500 million to go specifically towards CleanBC programs that will create clean jobs. The NDP has sent mixed messages on the specifics of what a clean recovery under its party could look like.

The Greens declare that they are the only party that opposes the LNG project and fought against it “every step of the way,” saying B.C. loses all hope of making its climate targets if the LNG deal survives. They immediately want to end oil and gas subsidies and redirect that money to spurring innovation.

The Greens also want to raise B.C.’s climate targets and commit the province to being carbon-neutral by 2045, matching the state of California’s climate target deadline, which has been called “history’s most ambitious."

Campaigning in the Comox Valley, new Green Leader Sonia Furstenau called the NDP’s commitments on carbon emissions “meaningless” without a detailed plan to achieve them. The Greens say they would set a 2025 interim target to make sure the government is on track to 2030.

The Greens held the balance of power in the NDP’s minority government. Fenton questions whether they used that power effectively to force action on emissions and climate change.

The BC Liberal plan assessed

Andrew Wilkinson, leader of the BC Liberals, has continuously framed the climate crisis and the economic downturn as a major opportunity for B.C., while criticizing the approach of the NDP.

“Your CleanBC plan is a giant hot air balloon with not much in it, Mr. Horgan,” he said during Tuesday night’s debate, outlining his plan to instead turn the province into a “clean energy powerhouse.”

Among those plans are a commitment to improving public transit, ensuring the widespread availability of electric vehicle charging stations and reducing the impact of climate-related disasters like wildfires and floods.

“What is striking to me are a couple of things from the Liberals’ website,” said UBC’s Harrison. “There’s an effort to shift the focus, I would say, away from climate by emphasizing a commitment to clean air and water protected wildlife, including wild salmon, and positioning B.C. as a global leader in clean energy.”

Contrary to the ambitious policies the BC NDP and the Green party have supported to reduce emissions, the Liberals would work with the federal government to review scheduled increases to the carbon tax and say they would increase the tax “incrementally” while keeping in mind the economic effects of the pandemic.

“The BC Liberals’ plan is really not in keeping with the science about what’s needed from a global environmental perspective,” said Chan. “And it’s really dangerous from a long-term economic growth and development perspective.... It will bolster 20th century industries and inhibit the growth of clean energy.”

Karen Tam Wu, B.C. director of the Pembina Institute, said it’s encouraging that all three parties have recognized that they need to be using emergency language when it comes to addressing climate policy.

Wu said she’s relieved “the starting point for conversation around climate and energy in B.C. is that there was agreement across the board that we need to take action. And I don’t think that is something that we should take for granted.”

“What it comes down to is, whoever forms government needs to make sure that they are reporting out transparently to British Columbians every year,” she said. “So that we know that the investments that we’re making are making the reductions that we need to be seeing.”

Adriana Laurent, a queer, mixed-race woman with a master’s degree focused on environmental sustainability, says innovative progress on climate change will address the disproportionate impact that climate change has on marginalized people.

“There is no climate justice without Indigenous sovereignty and Black liberation,” said Laurent. 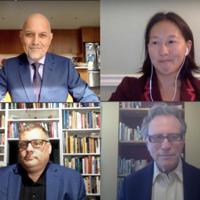 People experiencing homelessness were likely most affected by the wildfire smoke because many had no indoor space to escape to, Laurent said. Richmond, a city where many people of colour live, is increasingly threatened by rising waters, and boil water advisories still largely affect Indigenous people.

“I think CleanBC is focused a little bit more on the technical side of climate mitigation and adaptation, which in and of itself isn’t a bad thing,” said Laurent. “That work is absolutely necessary.”

But government should also be supporting at-risk communities, she said.

Eighteen-year-old Rebecca Hamilton and 17-year-old Naia Lee, too, are looking for a climate agenda that combines intersecting issues, including food security, housing and more.

“We’re listening to scientists, we’re in an emergency,” Hamilton explained. “And we’re going to put our normal lives on hold until the rest of the world starts acting with the urgency required by science.”