The parties’ platforms may not have many ideas on fixing the affordability crisis in post-secondary education. But students do, and they’re lobbying for change during this election campaign.

“For too long, students have been cut out of these conversations on post-secondary issues,” said Emily Lowan, director of campaigns and community relations with the University of Victoria’s student society.

Grace Dupasquier, chair of the Alliance of BC Students, and Tanysha Klassen, chair for the BC Federation of Students, head two organizations that represent almost every post-secondary student in the province.

They’re calling for changes that range from truly affordable education to comprehensive mental health support to fostering equity on campuses.

“We’re happy to support any policy priorities that come out that make education more affordable for people,” said Klassen.

But affordability means much more than tuition fees. Housing, textbooks, mandatory extra fees and transportation all contribute to the steadily rising cost of pursuing post-secondary education.

To make it more affordable, the entire funding model for post-secondary schools needs to change, advocates say. In 1979, for example, approximately 90 per cent of the budget for post-secondary institutions was covered by the province — today, only about 43 per cent is.

Schools have made up the funding gap by raising tuition fees, especially for international students who aren’t covered by a provincial limit on increases for domestic students. The decline in the number of international students due to the pandemic has been less than feared, but still left universities hurting for cash.

“My question to all of the parties is, is this a model that’s going to work? Are we going to start reinvesting in our social services properly?” asked Dupasquier. “Post-secondary is absolutely a social service; it’s meant to be public. It’s meant to be subsidized, so that anybody within British Columbia who [wants] an education can receive one, and that’s not the way it works today.”

Brent Calvert, president of the Federation of Post-Secondary Educators of BC, said a full funding review and greater investment in operating grants is “long overdue.”

He said the increased funding should be used to improve pay and working conditions for contract instructors — many of whom are women and people of colour — which would improve students’ education.

When contract workers are inadequately paid and struggling to make ends meet, Calvert said, they’re not able to do the extra service work and office hours required for students to feel engaged.

Alireza Kamyabi, vice-president of external relations for UBC’s Graduate Student Society, said graduate students, many of whom are also international students, are often left by the wayside when it comes to affordability.

“The idea that the student population in UBC is monolithic is false. It’s a misconception,” said Kamyabi, explaining that graduate students have unique needs.

Kamyabi is advocating for an expansion of the B.C. Access Grant, a needs-based support program introduced in August geared towards low- and middle-income undergraduates, to include graduate students.

And several graduate societies want the government to make the B.C. Graduate Scholarship, a $12-million fund that distributes 800 awards of $15,000 for graduate research, to be permanent and include students in non-STEM disciplines. The scholarship, introduced in 2018, is the first at a graduate level in the province’s history and is set to expire in 2021.

The lack of financial support for B.C.’s graduate students has had an effect. From 2005 to 2015, graduate student enrolment in Ontario, Quebec and Alberta — provinces with government-funded scholarships — increased on average by roughly 50 per cent, while B.C.’s increase was only 15 per cent, according to a 2018 report from the Canadian Association for Graduate Studies.

Advocates say that investments in further education and skills training could give students of all ages more opportunities across B.C.

“A lot of people have put their education on hold because they know that [online school] is not an environment that they can learn in, for example,” said Klassen. “A lot of young people have really bore the brunt of the issues created by the pandemic, so hopefully we’re going to see... economic recovery that works for everybody.”

“People are looking for a just recovery. And education has a vital role to play in that,” said Calvert.

This year the Alliance for BC Students has also asked the government for better data collection and reporting standards in campus sexual violence policies, funding for open educational resources and a cap on yearly increases in international student tuition.

BC NDP candidate Melanie Mark has led the Ministry of Advanced Education, Skills and Training since 2017. Her government has introduced policies aimed at making education more accessible for marginalized students.

In 2017, she introduced a provincewide tuition waiver policy for former youth in care, but the program is not without conditions — there is an upper age limit of 26, for example. The BC NDP have promised that if they win Saturday’s election, they will eliminate the policy’s age limit.

In April, the NDP launched a free counselling service for post-secondary students called Here2Talk, which is available 24-7 through a hotline and online chat feature. It’s a great first step, Dupasquier said — but students have been lobbying for schools across the province to increase their mental health support for years, particularly around in-person care.

“Ongoing support with the same person is critical,” she urged. “And we know that students who are able to access the same counsellor over and over again, build up a relationship, build up a rapport, have much better results.”

In June, Mark announced the Aboriginal Post-Secondary Education and Training Policy Framework and Action Plan, which outlined steps to improve post-secondary opportunities for Indigenous peoples and provided $6.15 million to schools.

“I’m proud to be part of a government that is responding to the Truth and Reconciliation Commission's Calls to Action by empowering Indigenous students with the tools they need to pursue their dream careers and make it to the finish line,” Mark said at the time. Mark is Nisga'a, Gitxsan, Cree, Ojibway, French and Scottish, and is the first ever First Nations woman elected to the B.C. legislature.

In July, Mark announced $1.5 million to support students with cognitive, mental health or physical disabilities, to be distributed equally between 20 public post-secondary schools. The BC NDP also eliminated interest on provincial student loans in 2019.

But despite making headway in recent years, students say there’s so much more to be done.

The BC NDP’s platform is the most robust on post-secondary issues, but still doesn’t delve into a lot of detail. Among the commitments is a promise to broaden eligibility for the B.C. Access Grant, which has been a policy priority for students. The program, which provides needs-based student support, was introduced in 2020 and marked the first investment in post-secondary student grants in 15 years.

The NDP says it would also strengthen the Tuition Limit Policy, which currently prevents schools in the province from raising domestic tuition and mandatory fees more than two per cent every year and create more learning and training opportunities around the province, particularly in health care. 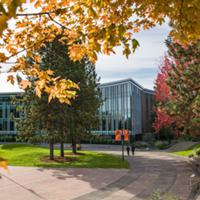 The BC Greens’ platform also addresses the B.C. Access Grant. They want to double its funding to help support part-time students and those enrolled in multi-year programs. They also want to increase investment in the post-secondary sector overall and provide funding so education can play a larger role in Indigenous reconciliation.

The BC Liberals have promised over $200 million in new spending over three years for post-secondary education but have gone into little detail as to where that money might be directed. Their platform’s focus is on work experience and emphasizes co-ops and apprenticeship training.

Despite the scant commitments on post-secondary policy from the parties, students are determined to push for their viewpoints to be heard.

The Take It Over campaign, which aims to boost student voter turnout, has been endorsed by 20 post-secondary organizations in the province and represents over 375,000 students from every region of B.C.

The goal is to make sure “that young people’s voices are going to be heard,” said Klassen. “We know, historically, media and politicians tend to overlook young people and say that they don’t vote, when we know that’s simply not the case.”