With British Columbia’s two largest political parties saying they’ll push ahead with construction of the Site C dam despite growing challenges, the controversial megaproject isn’t likely to be the big election issue its many critics would like.

In an open letter to B.C.’s political parties released Friday, the BC Hydro Ratepayers Association and the “Say No to Site C Dam” group said they had collected 5,000 signatures from people who want the project cancelled. “We are calling on all political parties, all candidates to take a unified stance, to stop Site C,” they wrote.

Earlier in the week, a group of 18 prominent British Columbians released a statement urging the government to reconsider continuing with the project. They included former BC Hydro president and CEO Marc Eliesen, former ICBC CEO Robyn Allan, the Union of BC Indian Chiefs' Grand Chief Stewart Phillip, and Harry Swain, who chaired the Site C Joint Review Panel that completed its work in 2014.

“The prudent course of action — one that respects Indigenous and treaty rights as well as the interests of all taxpayers and hydro ratepayers — is to immediately suspend all construction activities at the project,” they wrote. “This includes the imminent and critical river diversion. It’s folly to allow that diversion to occur when geotechnical woes of unknown magnitude abound at the construction site.”

In a July update for the B.C. Utilities Commission, BC Hydro had flagged “serious concerns” about the Site C dam’s schedule, scope and budget. There were delays due to the COVID-19 pandemic, but also a problem discovered on the right bank of the river requiring stronger foundations under the powerhouse, spillway and core areas of the future dam. The utility couldn’t say what it would cost to fix it.

With the project looking more and more like the political equivalent of a steaming pile of poo, the government appointed former deputy minister Peter Milburn as a special advisor to work with BC Hydro and the Project Assurance Board and advise the government.

NDP Leader John Horgan said last week that the government would decide what to do after Milburn’s report on the project is made public, though he couldn’t say when that would be, and meanwhile work on the dam would continue, including the upcoming river diversion.

Horgan said the river diversion was “critical to meeting timelines, it was critical to staying on budget.”

He also offered a reminder that before the NDP formed government in 2017, the previous BC Liberal government had tried to get Site C past the point of no return. The incoming government ordered a review of the project, consulted with professionals who were for and against continuing, but ultimately decided to keep going.

“We concluded that a $4-billion hole had been created and it would be best to carry forward,” Horgan said. “We did so reluctantly, but we did that with the best information we had at the time.”

And while Horgan has said in the past that an NDP government wouldn’t have started construction of the dam, and others have pointed out that the geotechnical issues in the region have long been known, BC Liberal Leader Andrew Wilkinson insisted the project was in good shape when the NDP inherited it.

“The Site C project was initiated under the BC Liberals and after a lot of fuss was carried on by the BC NDP,” Wilkinson said. “The project is approaching completion, and it would make perfect sense to complete it.”

It’s up to the NDP to explain what’s gone wrong, he said. “We delivered the project into the hands of the NDP on time and on budget and now it is running well over budget and well over time because of NDP mismanagement,” he said. “Through their mismanagement it seems to be going off the rails.”

That leaves supporters of the dam — and there were many ahead of the latest round of bad news — with little to choose between the main parties, neither of which would immediately halt construction.

BC Green Party Leader Sonia Furstenau, however, said construction definitely should be stopped before the river is diverted.

“When you’re in a hole this deep, it’s time to stop digging,” she said. “It’s time to listen to the experts that don’t agree with you. It’s time to look at evidence and reality and make decisions based on that.”

Experts had been identifying geotechnical issues that would affect construction since well before 2017, Furstenau said. “From the very beginning the NDP have chosen to only listen to the experts that tell them what they want to hear on Site C,” she said. “It should have come as no surprise whatsoever that this is the situation we’re in right now.”

Furstenau said building the dam is really another way to subsidize the natural gas fracking industry, which will benefit from access to electricity from the project. “This is the wrong direction for our province. We should be investing in renewable energy, in a clean energy economy.” 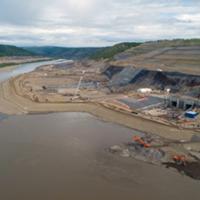 The Green MLAs consistently opposed proceeding with Site C and the NDP rejected the evidence on the project when it made the decision at cabinet to continue, she said. “They made the decision entirely on their own. We indicated where we thought they should go very clearly, and they made that decision.”

George Hoberg, a professor in the school of public policy and global affairs at the University of British Columbia, said he doubts Site C will become a major factor in the provincial election. “I’m sure it will be brought up, but I doubt it will have a lot of legs,” he said.

“They could make some argument about project mismanagement, but it’s [former premier] Christy Clark’s project that they dumped onto John Horgan’s lap, so it’s hard to imagine they’re going to get any credit out of that.”

Hoberg said he figures voters who care deeply about Site C have likely already left the NDP. “My sense of the environmental wing of the NDP these days is they’re far more focused on climate issues and forestry issues than they are on Site C,” he said.

The budget for Site C had already grown significantly since the project was first proposed and was pegged at over $10 billion in 2017 when the NDP decided to continue construction. It was to begin power generation in 2023 and be completed by 2024.

Despite not being able to stop Site C, the BC Greens worked effectively in the minority government and helped write the strongest provincial climate plan in the country, Hoberg said.

“The question is what happens now to the NDP if they end up in a majority situation without the Greens having that degree of leverage,” he said. “They really face split pressures within their cabinet and caucus on it.”