British Columbia Premier John Horgan today announced the controversial decision to dissolve his minority government early and send the province to the polls.

While Horgan said the Oct. 24 election is needed to provide stability over the next four years, the opposition parties said that holding an unnecessary vote during the COVID-19 pandemic is a cynical, partisan move.

“It’s 3.5 years since the last election, and it’s never a bad idea to ask the people of British Columbia what they think,” Horgan said.

By holding an election, the province would be able to “put the politics behind us” and get on with dealing with the serious health and economic challenges it faces, he said, challenges that will persist beyond the next year.

“I cannot imagine 12 more months of bickering, 12 more months of not knowing whether a bill would pass the legislature because of uncertainty in numbers,” he said. “I think the best way forward is to resolve that now.”

The NDP took office in July 2017 with the support of three BC Green Party MLAs. Former leader Andrew Weaver has since resigned from the party and sits as an Independent. He remains committed to voting with the government on budget and confidence bills.

During the summer sitting of the legislature, the two remaining Green Party MLAs — new leader Sonia Furstenau and Saanich North and the Islands MLA Adam Olsen — withheld their support for two government bills.

The most serious, Horgan said, was a bill that would have allowed youth who had overdosed to be detained in treatment facilities for up to seven days against their will.

Furstenau told reporters there was wide criticism of the mental health bill and opposing it was the responsible thing to do. The Greens had followed the agreement with the NDP and voted with the government on all budget and confidence bills, she said. That agreement included Horgan’s commitment not to call an election before next fall. Legislation had set October 2021 as the date for the next election.

Furstenau said she met with Horgan Friday and reiterated that she and Olsen would continue their support for the government, she said.

“This has not been a time of instability in government,” she said, adding that the B.C. legislature has shown an unprecedented level of co-operation through the pandemic. “We are now headed into what is a completely unnecessary election.”

People are worried about the return to school, their jobs and housing, she said. “This is not a time when we put the interests of a political party ahead of the British Columbians who need to know we are here to serve them. I am disappointed this is what John Horgan has chosen to do, and I fully intend to hold him accountable for this decision.”

During the election campaign the Greens will give people an alternative to the style of politics that puts partisanship ahead of the health and well-being of British Columbians, Furstenau said.

BC Liberal leader Andrew Wilkinson said the election is unnecessary and the only reason for the NDP to call it is to secure their own jobs. “Today John Horgan chose politics over people,” he said.

Nobody in B.C. wants the election other than the NDP, Wilkinson said. “We’ve got a government that is cynical enough to put us through a general election in the middle of a pandemic.” 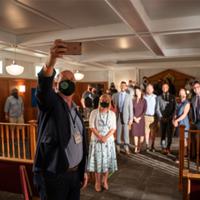 We Asked Smart People If the NDP Should Call an Election

It’s a time where leadership and stability are needed, Wilkinson said, and the BC Liberals will roll out a “bold” and “exciting” plan over the next week. “We need to make sure this is a province where we can all prosper, not a province where petty politics get in the way of health and economic security.”

Current standings in the house are 41 seats each for the BC Liberals and NDP, two Greens and two Independents with one seat vacant.

Earlier in September, the Angus Reid Institute released polling that showed 48-per-cent support for the NDP among decided voters, giving the party a substantial lead over the BC Liberals at 29 per cent support and the BC Greens at 14 per cent.