The estimates for what it will cost to restore areas already damaged during the construction of the Site C dam are being exaggerated, says Chief Roland Willson of the West Moberly First Nations.

“The Peace country is very resilient,” Willson said at a news conference in Victoria Monday. “All they’ve got to do is make it safe, make the site safe, deal with those tension cracks they have, and then leave. Go home. It will take care of itself.”

Premier John Horgan has said the British Columbia government will decide by the end of the year whether to continue building Site C. Approved in 2014, construction on the controversial project began in 2015 and former premier Christy Clark had said she hoped to move it beyond the point of no return before this year’s election.

In November, the 299-page British Columbia Utilities Commission Inquiry Respecting Site C Final Report to the Government of British Columbia, ordered by the new government, found the project is already over budget by at least $1.6 billion and is likely behind schedule. The BCUC projected a final cost of at least $10 billion.

The BCUC found terminating the project and remediating the site would cost about $1.8 billion, not including the cost of replacing the power Site C would generate.

“I think it’s out of line,” Willson said of the $1.8 billion figure. “These people are trying to fear monger everybody and saying ‘it’s going to cost too much to stop.’ That’s BS. That’s literally idiotic.”

Willson was a logging contractor before he became chief. “I’ve watched areas like this come back,” he said, adding that grasses and deciduous trees return first. Mentioning the old fort site that was logged two years ago for Site C, he said, “The aspen’s already starting to come back. You can barely walk around through there, it’s come back so thick.”

His vision for the area doesn’t involve returning it to how it was. “They destroyed an island. That island’s gone. They’re not fixing the island. We don’t want them to put the island back, we just want them to go home. It will take care of itself.”

There’s no need to seed anything, he said. “A little bit of recontouring, make the place safe and then just leave. It will come back on its own. It’s already doing that now.”

Completing the project would mean a much larger part of the valley would be destroyed and gone forever, he said. The third of a series of dams on the Peace River, Site C would flood an 83-kilometre-long stretch of the river to generate enough electricity to power 450,000 homes.

According to its report, the BCUC considered various submissions to arrive at an estimate for what it would cost to stop the project. BC Hydro estimated it would cost $300 million to terminate the project and $600 million to remediate the site, figures that included a 30 per cent allowance for contingencies.

Hydro’s estimate was based on bringing the site to a condition that doesn’t risk public safety and reduces future environmental impacts, but the BCUC noted “BC Hydro has ‘not assumed that the site will be restored to pre-project conditions — such a standard would significantly increase’ the cost estimate and timeline.” 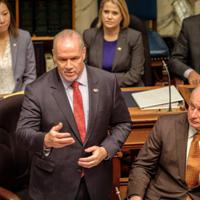 A report prepared by consulting firm Deloitte for the BCUC put the cost of terminating Site C at around $1.2 billion on top of what would have been spent anyway. Like BC Hydro’s estimate, the figure includes 30 per cent for contingencies.

Remediation costs Deloitte included would be enough to “return the site to natural conditions capable of supporting natural vegetation and wildlife.” It included funds for project planning as well as “environmental appraisal, permitting, and planning for construction and contracting.”

Considering both BC Hydro’s and Deloitte’s submissions, the BCUC panel found terminating the project and remediating the site would cost somewhere between $750 million and $2.3 billion. It landed on $1.8 billion as a “reasonable estimate.”

Willson isn’t the only person to question the BCUC’s figure. In an open letter to Horgan, energy consultant Robert McCullough, who has been retained by the Peace Valley Landowner Association and the Peace Valley Environment Association, wrote that the BCUC’s number is higher than what either BC Hydro or Deloitte estimated.

“Another viable option is a remediation cost of no more than $500 million, with Mother Nature doing the rest,” he said, adding that most of the Peace Valley remains intact.

Willson said he wants the government to cancel Site C and begin work on developing other sources of electricity. “The right decision is to stop this project before we waste any more money.”