“Any mill that’s been permanently closed or subject to indefinite curtailment in the last three or four months, that’s not been done as a result of stumpage,” he said.

With the softwood lumber dispute with the United States unresolved, he added, “The danger of political intervention in the stumpage right now is that it would make matters worse.”

About two dozen mills have announced temporary or permanent shutdowns this year, with four to six thousand workers affected.

The government charges businesses and individuals stumpage fees based on the volume, species and grade of timber they are harvesting at rates tied to the market price.

Since at least June, the BC Liberal Opposition has advocated for “immediately reducing stumpage fees and the carbon tax on the forestry sector, including contractors and others dependent on the sector, until market conditions stabilize,” a demand included in a letter that party leader Andrew Wilkinson and his forests critic John Rustad wrote to Premier John Horgan.

When a convoy of logging trucks arrived in Vancouver in late September during the Union of BC Municipalities convention to draw attention to the industry’s challenges, reducing stumpage rates was at the top of the list of proposed fixes.

Donaldson said the idea has taken root thanks to Wilkinson and Rustad.

“I hear it from logging contractors. I sometimes hear it in communities. That’s unfortunate, because some of the real issues about why we are where we are is that not enough has been done in the past to prepare communities for the decrease in volume that we’re seeing.”

The risk of US retaliation

The softwood lumber agreement between Canada and the United States expired in 2015, and producers in B.C. now face tariffs averaging 20.3 per cent on softwood crossing the border.

Cutting stumpage rates could be seen as an unfair subsidy, Donaldson said.

“The Americans are paying very close attention to what we’re doing right now because of the softwood lumber disagreement being unresolved and having targeted a number of our major licensees,” Donaldson said.

“They’re keeping a close eye on what we’re doing as a government. In the past, the stumpage system based on our BC Timber Sales and the market pricing system that comes out of that has held up. It’s tested and true in the international courts.”

Making changes to the system could make the dispute even more difficult to resolve, Donaldson said. “It’s important not to be seen as politically intervening in the stumpage right now.”

Rustad acknowledged the government needs to be careful about making changes. “If we were to artificially lower rates, we’re dead in the water. We can’t do that. That would just be huge fuel for the court.”

But the issue isn’t so much about reducing fees, Rustad said. The stumpage system needs to change to better reflect volatile market conditions, he said.

The rate currently gets a major update once a year, as well as “minor” quarterly updates, he said. The system was introduced some 15 years ago to help resolve an earlier dispute with the U.S., he added.

“When we put it in place we didn’t anticipate large swings in price structure, so it has a 12- to 18-month delay in terms of reflecting current market conditions,” he said. “British Columbia should be adjusting their stumpage rates more frequently so that we don’t have a lag and it’s able to reflect current market conditions both on the upside and on the downside.”

Reviewing the system and making sure it reflects current market conditions wouldn’t be a risk, he said.

“The Americans will try to use it — they’ll try to use everything they can — but at the end of the day, it’s reflective of market conditions.”

“We have to make our forest policy for the people of British Columbia, not for Washington,” he added.

Minister Donaldson said it’s incorrect to suggest the quarterly adjustments to stumpage are insignificant. On Oct. 1, for example, the stumpage rates dropped by 12 per cent in the Interior and by 24 per cent on the coast. “That’s reflective of market conditions.”

Donaldson said the bigger issue for the industry in the Interior is the declining log supply after several years of logging at an accelerated rate to harvest trees killed by the mountain pine beetle.

In the Prince George timber supply area, for example, the annual allowable cut needed to decrease by 33 per cent to be sustainable, he said.

“As far back as 2012, we know from documents that were supplied to the BC Liberals when they were in government that they were well aware of the kind of decrease that was coming and that mills were going to have to be shut,” Donaldson said. “They had five years to actually take action before the public decided they shouldn’t be government anymore, and they did little to prepare communities.”

On the coast the main issue has been the export of raw logs, he said. “The exponential increase in log exports has resulted in much fewer logs for domestic mills on the coast.”

Since 2017 the government has been working towards increasing the fees for exporting logs that could be milled in the province, a policy that won’t be fully in place until the end of December.

“It’s still unfolding,” Donaldson said. “We think it’s going to make a difference, obviously, that’s why we did it.”

The province also made changes to the Forest and Range Practices Act earlier this year and has an engagement process underway aimed at recommending further changes to be put into law next spring.

Another engagement process is focused on developing a strategy for managing the province’s old growth forests.

“It’s an issue where there are many communities on the coast and Vancouver Island and the mills are dependent on harvesting of old growth timber in order to keep economically viable,” Donaldson said.

The province planted 260 million seedlings this year, many more than most years, and is using a greater variety of species than would have been used in the past, he said. “We’re looking at creating a ‘forest mosaic,’ as they say, that helps different species and helps forests be more resilient to pest infestations but also to wildfire.”

Fred Marshall, a professional forester and woodlot owner in the West Kootenay, said the government is right to resist changing the stumpage formula. “In a lot of ways it’s very fair, because it does return to the people of B.C. a reasonable value for their timber,” he said.

“Of course the companies always want it for free, and for too long they’ve gotten it too cheap,” he said. “That’s why we have the stumpage system we have, mainly thanks to the U.S. because it was way too cheap before.”

Marshall said the government needs to take a more comprehensive approach for forestry policy, much as it did in the 1990s with the creation of regional Land and Resource Management Plans written with the input of a broad range of stakeholders.

While the government has done various small things on forestry over the last two years, there’s been nothing meaningful, he said. “They’re piecemealing it to death. They have no grand plan, and we need one.”

Torrance Coste, a national campaign director for the Wilderness Committee, said that while the government has taken some positive steps, so far it hasn’t recognized the need to fundamentally shift the industry, decrease the allowable annual cut and prioritize local production.

“I think they’re looking to sustain the current model for as long as they can,” he said.

Coste, who grew up in the Cowichan Valley and watched his father’s work in commercial fishing disappear as fish stocks declined, said that the health of ecosystems is closely tied to the health of communities.

The way the major companies practise forestry in the province, constantly pressing to reduce costs — including stumpage and labour — should be a concern for communities that depend on the industry, he said. “Our movement’s been saying it’s unsustainable since before I was born... It’s super frustrating, because the writing’s been on the wall here for a long, long time and everyone’s been avoiding it.”

A media contact for the Council of Forest Industries, an organization representing the industry, didn’t return The Tyee’s message by publication time.

Bob Simpson, the mayor of Quesnel and a former forest company executive, said that stumpage fees have become “hugely problematic” as a cost for the industry, but it’s unfair to blame the NDP government.

The Liberal government and the industry signed off on the system when it was started and supported it until recently, said Simpson, who was an NDP and Independent MLA from 2005 to 2013. “Now that they’re in extremis with a collapsed market, now all of a sudden the NDP are to blame for stumpage prices? I think that’s just nonsense.” 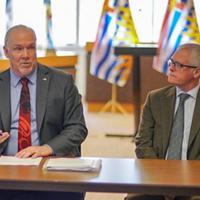 Political Amnesia, and the Long, Slow Fall of Timber in BC

He also noted that the stumpage rates reflect what companies had been willing to pay for logs. “Industry needs to go look in the mirror and understand how culpable they are in making the stumpage costs that they’re bearing today higher than they needed to be because they were all busy outbidding each other,” he said.

“I think industry owns a lot of this, the Liberals absolutely own the circumstance because they established the stumpage system, and to blame the NDP or the current minister is just ludicrous and patently unfair.”

It’s normal for the forest industry to shrink or grow depending on demand from the U.S., said Simpson, who for years advocated doing more to prepare the province and communities for a reduction in the number of trees available for logging.

“Now you’ve got Andrew Wilkinson and John Rustad pulling their hair out as if this is the only time it’s ever happened and it’s the NDP’s watch, so the NDP has to be blamed for it. They’re doing a disservice to the province by politicizing a pretty sensitive issue that needs way more nuance and explanation for the public.”