On Vancouver’s Granville Street, a cream-coloured, windowless wall wears the top half of an art deco façade like an ancient crown.

The façade is 89 years old. The wall it’s glued onto is 12 years old and belongs to Holt Renfrew, a high-end department store that Beyoncé visited on a Vancouver trip. Aside from the ornate headpiece, the wall’s only features are two doors for staff to slip in and out — not really something that tells you to look up.

As Vancouver rapidly redevelops, this kind of approach has become one way the city’s architectural past has survived to the present, but critics believe preserving a building’s skin is shallow heritage preservation.

The city has restrictions on changes to designated heritage properties. For some, no alterations are allowed. For others, only specific features are protected.

It’s easy for heritage to be discounted and swept away in the rising tide of real estate values. The projects that go ahead are the ones that promise the greatest returns, and protecting the past is expensive.

That makes it hard to treasure buildings or see property as more than a “money-making machine,” said Bill Yuen, the executive director of non-profit Heritage Vancouver.

“That’s become the norm. It’s part of our culture now. A lot of shows on TV are flipping shows.” Love It or List It. Flip or Flop. Masters of Flip. The goal is almost always to erase the past and make quick profits.

Some developers will do more than the minimum preservation required if there’s an incentive: the prestige of saving a building beloved by the community; incorporating heritage features to make their condo project stand out; or to win extra density from the city.

Density for preservation is a tricky exchange. Across the Salish Sea in Victoria, heritage advocates lobbied city council this month, worried that too much extra height and density is being offered to developers who are protecting too little heritage in the city’s Old Town.

In a letter to the city, 50 people — including heritage planners, architects, former politicians, neighbourhood advocates and academics — wrote that “there is a real danger of undermining the very strategic goals that the system of policies and regulations was established to achieve.”

There are many ways to preserve heritage, and what’s happening in Victoria shows that success can be subjective.

Michael Kluckner, who chairs the volunteer-led Vancouver Heritage Commission that advises city council, said “a lot of it comes down to my opinion versus your opinion.”

Architect Javier Campos, the president of Heritage Vancouver, says that preservation efforts range from feeble to committed. At the low end is the strategy — or sacrilege, depending on who you talk to — called façadism, when the front or shell of an old building is saved.

“Keeping a façade is an acceptable thing, and it was very popular in the 1980s and ’90s, but it’s so unidimensional,” said Campos. “It’s such a shallow commemoration. To me, it’s one step above having a plaque. If it’s significant enough, the answer should be restoration.”

Aside from the Holt Renfrew example, the art deco Power Block on Granville by Robson also survives as taxidermy. The colourful terra cotta facade, with Egyptian motifs, faces the street, while shoppers buy cheap tops and jeans at the Old Navy inside.

There are efforts that do more, while accommodating major redevelopment. Vancouver’s 1929 Old Stock Exchange was recently restored — not just “the depth of the brick in the front,” said Kluckner — and merged with a new, glassy 31-story tower.

“There’s enough historical preservation there to make it worthwhile,” he said. “And the building attached to it is a refined and elegant design. I think it shows off the old building very well.”

One coming heritage project, imagined with an eye-catching rendering, is a glass-walled office building that wraps a century-old house in a tight hug. The project is in Mount Pleasant, a once working-class, light-industrial neighbourhood transitioning into a tech hub sometimes referred to as Mount Pixel.

The house will be attached to the front of the office building and act as the main entrance. There will be restaurants on the ground level. The interplay between the house and the new building has been compared to the house from the Pixar film Up, boosting buzz online.

But is this a kind of façadism, or faux preservation?

The project divided the city’s heritage commission, which Kluckner found interesting. “We see people splitting over these kinds of hybrid developments where the new building is inevitably bigger,” he said.

One big question about these heritage hybrids is whether the new addition should blend in with the old or stand on its own.

“The architectural community and the heritage community would say the way to do it is to make them distinguishable,” said Kluckner. “You make the buildings explain the narrative of different styles.”

That’s happening with the The Post, the redevelopment of the Canada Post site on West Georgia. Two sleek new office towers will grow out of the International Style post office. Amazon plans to move in.

There are also examples of restored heritage buildings that are completely separate from new, distinct additions, like the Coastal Church beside the Shangri-La, Vancouver’s tallest skyscraper, and the James Residence, popularly known as the “Hobbit House,” beside new townhouses on King Edward. (Please see footnote.)

Beyond architecture, Heritage Vancouver’s Yuen points to the importance of preserving a place’s “spirit” or “mission.”

“It may be for its aesthetic purposes,” he said. “It could be people’s association with the place. It could be for use. It could be because it’s affordable. If you remove a mission from a building, then I would say it loses some of its success.”

For example, replacing well-used community space with private space or replacing an affordable building with something unaffordable that hurts the community.

Architect Campos offered the example of St. Paul’s Hospital. What if a high-end development replaces it when the hospital leaves the West End, he asked?

“You could keep it looking pretty, but if whatever kills the surrounding businesses, you’re losing a significant part of the area.”

Façadism plays a role because it’s often used as a “token gesture” to allow development that changes community.“The market forces at work require a much different building with much different programming.”

And just because you save a façade, it doesn’t mean you’re doing something for heritage, Yuen added.

People are a key part of determining heritage, and what they feel is important can be surprising. Campos shared the story of a shopping plaza on the northwest corner of Arbutus and 16th that was demolished in 2013.

The 1950 plaza was an oasis for the quiet, residential neighbourhood, home to the Ridge Theatre, Varsity Ridge Bowling and the city’s first Buy-Low Foods, among other businesses. Today, it’s a four-story condo building with a massive Loblaws City Market on the street level.

The only memory of the old plaza in the new development is a recreation of the giant red letters spelling “Ridge” that stood over the towering theatre. Locals mourned the loss of the plaza, but what they missed most wasn’t the iconic theatre.

“The funny thing is that they polled it, and what people wanted to keep was the bowling lanes,” said Campos. “And it seems funny, but it’s legitimate.” What the locals really mourned was their space for community.

For Vancouverites Eric Cohen and Yosef Wosk, who bowled there as children, the redevelopment of the plaza moved them to purchase the giant bowling pin at the entrance of the lanes from the developer for $5,000. It cost another $13,000 to move the one-ton pin to Wosk’s backyard. “I brought my kids here, so it’s multigenerational,” Wosk told the Vancouver Sun in 2013. “It’s a piece of Vancouver folk art, it’s not just commercial. It breaks up the too-serious landscape around here.” 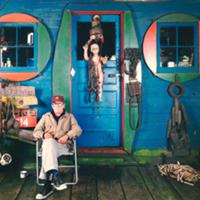 The Remarkable Effort to Save an Artist’s Shack

The spirit of a place could be in many things, Yuen and Campos agreed. It could be locals meeting each other for decades on a set of steps. It could be the fact that a type of home is affordable, so that a generation of newcomers can build a future in a city. It could be a landmark that keeps a neighbourhood of businesses alive. It could even be a bowling alley. The idea is to keep something that preserves history and promotes understanding.

But it doesn’t mean that cities should resist change and hang on to every house or office building or giant bowling pin.

“We have to realize we only have just over 100 years of history,” said Campos. “Ninety per cent of what we build will be torn down eventually. Give it 1,000 years. For people to think this is the best and greatest we can possibly do and that it’s finished and that we should keep it exactly the same — you’ve got to be crazy. We’re making heritage right now.”

Footnote: Christopher Cheung would like to note that Hobbits, a fictional creation of The Lord of the Rings author J.R.R. Tolkien, live in holes, not houses.