The BC Liberal Party has recently returned more than $174,000 in prohibited contributions, nearly double the amount the party had previously admitted, according to an Elections BC report today.

Elections BC announced that the BC Liberals had amended annual financial reports for the past seven years and returned 191 contributions worth a total of $174,313. The party also changed the contributor information for 19 others totalling $27,025, but did not return those donations.

On March 24 a BC Liberal spokesperson said the party was returning just over $90,000 to donors who had made the contributions improperly. “In these instances, individuals made donations with personal credit cards on behalf of their organizations and were reimbursed by those organizations, which constitutes a prohibited donation,” the party’s statement said at the time.

A BC Liberal spokesperson said today of the higher amount, “We have been clear that our thorough internal review of contributions is ongoing. We continue to identify prohibited or incorrectly attributed donations, and refund them as required.”

Elections BC said the NDP had amended reports going back five years and returned a total of $10,500 to a dozen contributors. 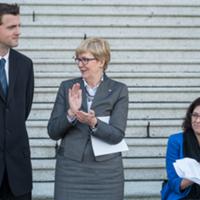 With the oversight of special prosecutor David Butcher, the RCMP is investigating party fundraising following reports in the Globe and Mail that lobbyists have been making political donations to the BC Liberals under their own names and then being reimbursed by clients, thus obscuring the real source of the contributions.

The BC Liberals’ amended report for 2016, for example, shows contributions were returned to Woodfibre LNG’s Byng Giraud and Marian Ngo, and to lobbyists Mark Jiles, Adam Johnson, L. Patrick Hurshowy and Carling Dick.

The party also returned $10,000 to the Hardy Family Foundation. Charities are prohibited from contributing to B.C. political parties.

The BC NDP’s supplementary report for 2015 shows Ivan H. Limpright received $7,250 back from the party. Limpright is the president of the United Food and Commercial Workers Local 1518.

NDP spokesperson Glen Sanford said there is likely more to come from the Liberals. “I think that’s the start of them returning improper donations, but it’s far from over.”

The NDP is looking at one more donation of $750 that has come to the party’s attention that may need to be returned, while the Liberals likely have many more, Sanford said.

Dermod Travis, the executive director of Integrity BC, said the list of names released is missing others who did the same thing. “I still think it’s about one-sixth of what it should be,” he said. “They’re missing some very key names that should be on that list.”

The parties should be required to not only return the illegal donations but disclose who they were really from, Travis said. “Very clearly in some of these cases it was a deliberate attempt to mask the identity of the donor and the public has the right to know who’s behind the mask.”

Some of the lobbyists work for multiple companies and so far there’s no way to tell whose money they were donating, he said.