British Columbia’s labour movement launched a campaign Wednesday to elect a more progressive government that will ensure better jobs, higher wages and investments into public services in next May’s election.

“We have the power to make British Columbia a truly great place to live,” B.C. Federation of Labour president Irene Lanzinger told a cheering crowd at its annual convention in Vancouver.

The federation, which includes unions representing more than 500,000 members, announced a political action campaign built on the slogan “Better Can Happen Here” aimed at electing an NDP government.

“We don’t think Christy Clark and the BC Liberals are looking out for the future of the people in the province,” Lanzinger said.

The campaign launch included several NDP candidates who discussed concerns about the current government and challenges ahead in the campaign.

Sue Powell, a municipal councillor in Parksville and NDP candidate for Parksville-Qualicum, told the convention she is running in the provincial election because of underfunding for important services from social workers to mental health care in her community.

“I’m tired of seeing more homeless people on our streets,” she said. “I’m tired of being told by Christy Clark’s government that British Columbia is a leader in job creation across Canada and the jobs she’s taking credit for are part-time, low-paying jobs.”

Issues of poverty and inequality were raised throughout the day. The federation has been pushing for a $15 minimum wage and increased investment in public services — proposals that have not been fully embraced by the Liberal government.

“We are all going to be in serious shit if this government gets elected again,” said delegate Terri Van Steinburg. 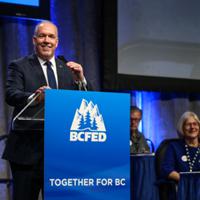 Horgan Makes Appeal to Workers: People of BC ‘Deserve Better’

David Black, chair of the labour federation’s political action committee, said the NDP lost the 2013 election because of a few thousand votes in key ridings. Thousands of union members live in hotly contested constituencies across the province and have the ability to swing the vote in the 2017 election, he said.

Making sure everyone votes is a priority for the federation. Delegates at the convention were asked to text a pledge stating they will vote for a new government on May 9.

“Imagine what we can achieve if we work together,” Lanzinger said.

The BC FED will be holding its leadership elections on Thursday. The convention ends Friday.