Somewhere in the bowels of the BC Liberal government, a team of public funded “creatives” is given one challenge after another. The next photo-op for the premier or her ministers demands one more pithy slogan, thought up and transferred onto podium, backdrop, placards and often, little cards handed out to the audience.

On April 15, for example, when Clark decided to restore RCMP gang enforcement funding that her government previously cut, the flip-flop was branded “Taking Action for Safer Streets.”

On March 30, the day’s call to action was “Mussel Out Invasive Species”...

... from the same punny people, presumably, who gave us, in 2015, Clark’s yoga-themed exhortation to “Om the Bridge.”

Crafting those messages is a taxpayer-supported industry growing faster here in B.C. since the Harper federal government made such event-specific propaganda standard operating procedure.

So it might interest British Columbians to know who does the work, how much it costs, and who is calling the shots at their province’s Government Communications and Public Engagement office.

We tried to find out. But instead of having slick words tossed back at us, we were walloped with a price tag.

Our freedom of information request to the government for the policies and procedures, costs and inventory of slogans and signs since Premier Christy Clark was re-elected in 2013 was met with an invoice for $270.

This we read as a sign. Namely, that the government is reluctant to reveal much if anything about its communications strategy.

A July 28 reply from the government said it would release such information for free, but only if it was restricted to public relations and advertising milled out during a four-month period preceding the July 11 FOI request date.

To produce the information we actually requested, said the government, would take nine hours and cost $270. So it demanded a $135 deposit. The Tyee will not pay such a fee. To us it just doesn’t add up, given the government finds $38 million a year in the public budget to publicize itself.

So much for transparency

B.C. isn’t the first or only government to employ a slogan-festooned-sign strategy, but it is headed by a politician who promised to be transparent about how public money is spent under her watch.

The request was filed, not coincidentally, one week shy of the fifth anniversary of Clark’s YouTube edict to the public service, in which the government claimed it had become a “national leader in open government.”

In that three-minute, 48-second video, Clark announced her open data and open information initiative. She looked into the camera and said, bluntly, “after all, it’s taxpayers’ money and taxpayers’ information,” without offering any ifs, ands or buts.

Going further back to 2001, Clark’s face is portrayed next to a campaign platform promise to make B.C. the most open, accountable and democratic government in Canada.

The Tyee’s sandbagged attempt to find out about Christy Clark’s secret slogan sloggers is small beans compared to some of the more egregious examples of BC Liberal attempts to blot out scrutiny.

The Clark administration has been the subject of damning reports by the Office of the Information and Privacy Commissioner. George Gretes, a former aide to Transport Minister and BC Liberal re-election committee co-chair Todd Stone, pleaded guilty July 14 to lying under oath about deleting emails about the Highway of Tears that had been requested under the FOI law. Gretes was fined $2,500. His lawyer, Chris Considine, told the court that he had learned to triple delete from someone higher up. 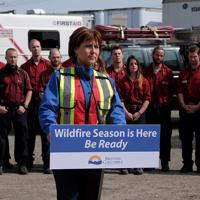 The deputy minister in charge of the BC Liberals’ $38 million taxpayer-funded publicity machine is John Paul Fraser, a Clark friend for more than 25 years. Fraser was previously a partner in Burrard Communications, the lobbying firm that was once run out of the Port Moody house Clark shared with her now ex-husband, Mark Marissen.

The BC Liberal government spent $12.45 million on information and publications for the year ended March 31, more than double the $5.67 million it spent in 2014-2015. Much of that was tied to the “Our Opportunity is Here” advertising campaign that launched in November. Kimbo Design, which created logos for Clark’s 2011 leadership and the party’s 2013 election, billed taxpayers $4.25 million between April 1, 2015 and April 30, 2016 for work on that campaign and others.

Delta independent MLA Vicki Huntington was the most outspoken in question period during the spring session of the legislature, calling the practice of using public money to pump party fortunes “undemocratic.”

“Transparency about advertising budgets leading up to the election is non-existent. If the government had nothing to hide in its pre-election government ‘communications,’ they should be able to itemize every single public information campaign they have planned,” Huntington said.