Taxpayers were billed $6,054 for a Learjet to take Premier Christy Clark on a one-day visit to Prince George that included a photo op and the BC Liberals' annual northern fundraising dinner. 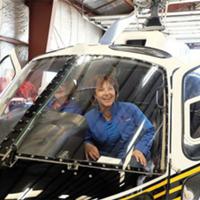 The Orca Airways itinerary for April 22 shows that Clark flew with press secretary Stephen Smart, aide Andrew Ives and videographer Kyle Surovy. The name of a person believed to be an RCMP bodyguard was censored by the government for privacy and security reasons.

The itinerary said the flight from Vancouver was scheduled for 9:30 a.m. to arrive in Prince George at 10:27 a.m. and leave at 8:30 that evening.

The B.C. government's photo gallery shows that Clark visited the Forest Ministry's Prince George Fire Equipment Depot and Yellowhead Helicopters for photo opportunities and an announcement about wildfire safety. On Facebook, there are photos of her with a disc jockey at the studios of 94.3 The Goat FM.

That evening, Clark headlined the annual Prince George Leader's Dinner at the Civic Centre, featuring the region's Liberal cabinet ministers Shirley Bond, Mike Morris, John Rustad and Coralee Oakes. Tickets were $90 each or $900 for a table of 10, but a pair of seats at Clark's table were for sale at $25,000. Another ticket was offered for $15,000.

Last year, the same event grossed $170,809 from 634 ticket sales and auction proceeds and raised $22,619 for the party after expenses, according to the party's filings with Elections BC.

Nothing on the government's travel invoice coding sheet indicates the BC Liberal Party was invoiced for the expense. The premier's press secretary, Stephen Smart, did not respond to a request for comment. Party spokesperson Jillian Stead also didn't respond.

"If she has billed the taxpayer in order to fly to Prince George for a BC Liberal fundraiser, she's going to have to pay that money back," Eby added. "It just shows you how completely out of touch she is flying on private jets to a city with regular commercial flights and billing the taxpayer for it."

Government policies state that charter flights are permitted if there is no alternative means of transportation at a lesser cost, and within a reasonable time.

The policies also say that "travel that combines government and personal business must be reimbursed at the lesser of actual transportation expenses; or an estimate of the minimum acceptable expenses that would have been incurred if the personal travel had not taken place."

Trip not included in FOI request

Just two days earlier, Clark took an $8,503 charter flight to Fort St. John for an April 20 one-day trip to appear at a pro-LNG rally and meet with representatives of northeastern B.C. resource municipalities. It is not apparent why Clark returned to Vancouver instead of staying in northern B.C.

The legislature was on hiatus that week and Clark had a light schedule on April 21. Her agenda shows phone calls and meetings with aides and deputies between 10:50 a.m. and 12:30 p.m. On April 22, she was scheduled to speak at the B.C. Leadership Prayer Breakfast at the Hyatt Regency in Vancouver before leaving for Prince George.

The Tyee received the invoices for the Fort St. John and Prince George trips from the NDP caucus after the government failed to disclose them under an FOI request for records for all charter flights between April 2 and May 2.

The government's response to The Tyee request on June 21 only included records on two Orca Airways flights during that period: an April 8 one-day round trip from Vancouver to Kelowna ($3,396) and an April 13 one-way from Victoria to Vancouver airport ($1,018).

According to The Tyee's analysis, Clark has visited Kelowna 22 times since becoming the area MLA in 2013 and did not stay overnight on 20 of those trips.

Eby questioned the charter flights, the failure to disclose them under FOI rules and the linking of government business and party fundraising.

"This is almost the perfect example of every scandal that this government is currently involved in -- the premier's fundraising practices, her government's destruction of records to avoid FOI and her use of private jets to areas serviced by commercial airline," Eby said. "It's almost like a mini-metaphor for this entire government's practice and how broken and deeply corrupted their practices are around use of public resources and their endorsement of a broken fundraising system."