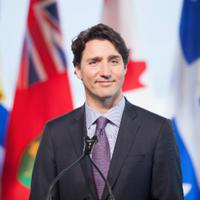 What Did Trudeau Achieve at Climate Meet-up with Premiers?

"It's an equation that doesn't add up," the Harvard climate professor said with a smile in an interview with the Tyee on Monday. "It's like when [U.S. President] Obama talked about the 'all of the above' energy policy. In theory, that sounds great, but it doesn't work."

The globally influential climate change thinker, historian of science, and co-author of Merchants of Doubt was in Vancouver for a public talk at the Vogue Theatre Tuesday night put on by UBC's Peter Wall Institute for Advanced Studies.

She talked up the urgency of acting to avoid catastrophic global warming -- and talked down Canada's apparently oil-friendly climate strategy.

"If Trudeau can say we're going to do all these things," she said, "that says to me that they have not truly assimilated what is at stake here."

Trudeau raised eyebrows when he told a Vancouver sustainable business summit last month that "the choice between pipelines and wind turbines is a false one. We need both to reach our [climate] goal."

For one thing, she said, building giant new bitumen or natural gas pipelines today will commit Canada to fossil fuels for 50, 70, or even 100 years into the future -- a problem she called "infrastructure lock-in" -- when the world has only about 30 years to decarbonize 80 per cent of the global economy if we wish to avoid two degrees of planetary warming and "trillions of dollars" in economic damages.

"If you could say, 'We're going to have oil and gas development just for the next 10 years, and we're going to take all that revenue to develop sustainable energy and communities, then we're going to shut it all down,' that would be okay if you could actually do that," Oreskes conceded.

"My view [on pipelines] is... don't do it!" the professor said. "Because once you go down that road, you may not be able to turn back. And if you can't turn back, then you're looking at four degrees of climate change, metres of sea level rise, and massive intensification of extreme weather events."

Another problem for Canada's energy plans, Oreskes said, is emerging evidence that natural gas infrastructure leaks far more methane than previously thought. The U.S. boom in fracking for gas and oil may be causing a recent and worrying global spike in atmospheric methane.

"Natural gas is methane, CH4. Methane is an extremely powerful greenhouse gas. Depending on exactly how you do the calculation, it's anywhere from 24 to 72 times as powerful [as carbon dioxide]," Oreskes said.

While the U.S. industry has maintained that methane leaks from gas pipelines, well heads and storage facilities represent just two per cent of the gas produced, she said, new evidence shows it's more like five to 11 per cent -- entirely negating the fuel's lower combustion emissions. "The whole story about [natural] gas being better than coal turns out to be completely false," she said.

Likewise, B.C.'s globally lauded carbon tax is "sort of schizophrenic," she observed, when viewed against the large scale of the province's planned LNG developments.

'Driving a stake' through denial

Oreskes, who still calls Alberta's bitumen reserves by the name she learned in college -- the "tar sands" -- rose to international attention in 2004 after she published a then little-known fact in the journal Science: the world's scientists are virtually unanimous in their view that the world is warming, and humans are causing it.

Of 928 peer-reviewed studies she examined, not one disagreed with the consensus that mankind is heating the planet with the release of greenhouse gases. Other investigators confirmed her finding, producing the now familiar statistic that 98 per cent of climate scientists accept the fact of anthropogenic global warming.

Richard Littlemore, the Vancouver-based co-author of Climate Cover Up, about industry groups' campaign to sow doubt about the science of climate change, credits Oreskes with making a giant contribution to correcting the public record.

Before her Science article, Littlemore said, journalists often quoted climate denialists in order to get the "other side" and create an impression of balance.

"News reporting was confusing beyond management or wrong... and the overwhelming impression that left was that it was there was still a legitimate debate," he said. "Naomi drove a stake through that."

Oreskes's Merchants of Doubt, which became a documentary film in 2014, also exposed how many of the industry spokespeople questioning climate science had earlier attacked scientists who published evidence of potential harm from ozone depletion and tobacco consumption.

Oreskes said these opponents protect a set of "political and economic interests" in America that feel government regulation is getting in the way of free enterprise.

But sticking her neck out has earned Oreskes enemies. Her landmark 2004 report attracted an avalanche of hate mail. U.S. Senator James Inhofe -- known for throwing a snowball across the chamber to demonstrate his view that climate change is a hoax -- accused her of being part of a conspiracy to bring down capitalism.

"One of the weirdest days of my life," she said, "was when I got a phone call from a reporter at the Tulsa Register, and he said, 'Did you know that Senator James Inhofe made a speech attacking you?'

Despite the fact that G.O.P. presidential nomination candidates Donald Trump and Ted Cruz have both threatened to tear up Obama's climate policies, Oreskes believes much of America now accepts that climate change poses a real threat.

"As long as Republican candidates for president perpetuate the idea that this is a hoax, this will 'destroy the economy,' 'we should rip up [the] Paris [climate accord],'" she lamented, "it makes it really hard to imagine how we'd make forward progress.

"On the other hand, if you look at what's happening at the state level in the United States, or in the business community, then you see a different picture."

Oreskes pointed to Risky Business, a report produced last year by a private group led by billionaire former New York City mayor Michael Bloomberg and Hank Paulson, who served as treasury secretary in the administration of President George W. Bush. The document laid out "very clearly why climate change is an economic and business problem."

The author is optimistic. New research shows that most of the world's energy needs can be met with existing renewable technologies.

But it will take political power to make it happen, Oreskes said. And a political program more in tune with climate realities than an 'all of the above' approach.