Last week, Prime Minister Trudeau met with all 13 premiers in Vancouver, to work out a pan-Canadian climate change plan. So what did the Prime Minister achieve? 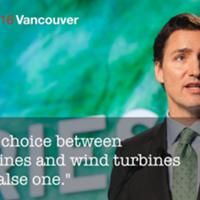 Can Big Oil Be Part of the Climate Change Solution?

Despite hopes for more ambitious emissions targets, Canada's carbon slashing goal will remain the same as the one created by the former Harper government last year.

"The challenge that we've laid before us of reducing by 30 per cent our emissions from 2005 levels by 2030, is a significant one," said Trudeau.

Trudeau also hoped to negotiate a new national price on carbon pollution -- but that will have to wait. The so-called "Vancouver Declaration" only commits all provinces to study carbon pricing and put forward regional plans by this fall when the premiers will meet again.

"That CO2 is captured, and then we sell it to oil companies, because CO2 happens to be a great solvent for enhanced oil recovery."

GHG target weakest in G7: May

B.C. already has a carbon price at $30 per tonne, and Premier Christy Clark said the Vancouver agreement shows flexibility for provinces to fight climate change in their own way. B.C. is now reviewing whether to increase its carbon price.

Reacting to the Trudeau's climate agreement, Montreal environmentalist Steve Guilbeaux with Equiterre said, "Now we have a plan to develop a plan. You could argue -- well, couldn't they go faster? [But] they haven’t had a conversation on climate in a decade."

Opposition NDP critic Nathan Cullen said in a statement, "After decades of disappointment and inaction from successive Liberal and Conservative government, Canadians are looking for real action -- including firm targets and legislated accountability."

Green Party leader Elizabeth May also said Canada's emissions targets needs to be more ambitious, and hopes the Trudeau government will improve upon it before the Paris climate agreement is ratified in New York on April 22.

"To avoid a global temperature rise of more than 1.5 degrees Celsius, Canada will need to improve upon our current GHG target of 30 per cent below 2005 levels by 2030 -- the weakest target in the G7," May said in a statement.