While a toxic spill fuel in Vancouver's English Bay on Wednesday evening raises questions about tanker traffic off B.C.'s coast, experts are also warning that some international shipping companies may be making our waters more unsafe by legally registering vessels in countries with worse safety records than Canada's. 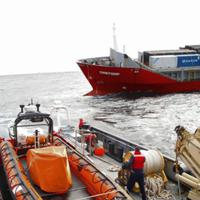 The Coast Guard alerted local authorities to a long slick of leaked fuel in the waters off Stanley Park early Thursday morning, after spending the night trying to contain it.

Authorities confirmed the spill was bunker fuel, a heavy fuel oil product that Environment Canada warns is a likely cancer-causing toxin known to concentrate in aquatic animals. The Coast Guard estimated the spill to be roughly 3,000 litres.

"We did see a film of pollution coming onto the beach," Vancouver councillor Geoff Meggs told reporters on Thursday, adding that "this is obviously something that no one in Vancouver ever wants to see, this kind of contamination of our beaches and our sea waters."

Environment Canada warns on its website that bunker fuel presents "a high hazard to human health" and poses a risk of "inherent toxicity to aquatic organisms" including bioaccumulation, the process by which toxic compounds are concentrated up the food chain.

The fuel is the same type of hydrocarbon that raised alarm last October, when a Russian ship loaded with 400 tonnes of bunker fuel lost power and drifted within nine kilometres of Haida Gwaii. It was later rescued by private and Coast Guard vessels.

For Dana Miller, a researcher at the University of British Columbia's Fisheries Economics Research Unit, the spill "gives us an idea of how much damage could be caused" if oil tankers were involved. The number of such tankers in Burrard Inlet is expect to increase seven-fold if Kinder Morgan's TransMountain pipeline is approved.

"If one of those vessels were involved in a spill, there's a much, much greater risk than this," Miller said in a phone interview.

But she cautioned that a larger issue is shipping companies, which might be attempting to skirt international safety regulations.

Despite being owned by a company in one country, ships plying international waters can register as being based in a different country. It's a legal manoeuvre known as flying a "flag of convenience," and is permitted if proper paperwork and regulations are followed.

The Coast Guard could not "definitively say" where the fuel spilled from, but emergency responders set up a boom to contain the oil around a single ship, the Cyprus-flagged bulk cargo ship Marathassa. The ship's crew has denied it was the source of the spill, but the Coast Guard said that the oil flow ceased once the ship was surrounded.

According to the ship-tracking website Vessel Finder, there are currently 10 bulk carrier ships or oil tankers currently in English Bay, all of them flagged to countries overseas.

Some shipping companies fly flags of convenience to reduce the taxes they pay, as some flag-offering countries are also tax havens. Countries also vary in their degrees of regulatory red tape, labour laws and the speed of processing applications.

"Some countries don't do as well as others in enforcing the minimum standards of safety as other countries," Miller said. "They might reduce operating costs by flying the flag of one of these countries."

In the past 10 years, for example, Canadian authorities have detained 16 vessels bearing the Cypriot flag for a variety of "deficiencies" -- everything from unpaid wages to main engine problems, "cracking ballast, fuel and other tanks" and the corrosion of bulkheads -- for more than 70 days, cumulatively, according to public records on Transport Canada's website.

Nonetheless, Miller said Cyprus has a "fairly good" record of complying with international standards and agreements when it comes to inspecting visiting ships. But the ease of obtaining its flags does raise questions about a number of countries that, like Cyprus, are well-known flags of convenience.

That's little comfort to West Vancouver-based marine lawyer Jay Straith. While stringent marine safety regulations govern any ship visiting port in Canada, Straith said the problem is that the rules are subject to "political interpretation" by the government of the day.

Transport Canada, which regulates marine safety, could not be reached for comment by publication time. On its website, the federal department states that under its Port State Control program, foreign vessels entering Canada's waters are boarded and inspected to ensure they comply with international maritime conventions.

"I would want all hydrocarbon carriers coming in and out of Canadian waters to be either Canadian-flagged or under the flag of a nation receiving the hydrocarbons," Straith said. "I can live with Chinese flags, because they'd be subject to the same regulations. But you shouldn't have a Cypriot freighter hauling oil between Canada and the U.S. or Canada and China."

The spill drew parallels to and criticism of bitumen-bearing tanker ships, which pose what Straith called "low-likelihood, high-consequence" risks.

"If this one causes everybody to wake up as to how serious this could get, we may be getting off lightly," Straith said. "If what doesn't kill you makes you stronger, maybe this one will be enough of a wake up call, particularly politically: we're going to gauge how we do with this one, and how 'world class' the response is."