The National Energy Board faces another major motion alleging that it has violated the freedom of expression of Canadians by restricting participation in the Kinder Morgan hearings on the Trans Mountain pipeline expansion project. 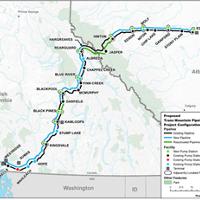 Launched by ForestEthics Advocacy Association and more than half-a-dozen private citizens, the motion challenges amendments to the National Energy Board Act made by the Harper government in 2012 in the omnibus Bill C-38. That bill limited participants in board public hearings to those "directly affected" by the project.

"How can this board determine whether the development of this pipeline is in the public interest, as opposed to being completely adverse to the social and economic well-being of Canadians both at present and in the future, without hearing submissions on these issues?" asks the motion.

Bill C-38 weakened most of the nation's most comprehensive environmental legislation, including the Fisheries Act and the Canadian Environmental Assessment Act.

If today's motion to the National Energy Board fails, the applicants will take their case to the Federal Court of Appeal.

Kinder Morgan, the third largest energy company in the United States, has proposed to triple capacity on the Trans Mountain pipeline from 300,000 to 850,000 barrels a day in order to serve Asian markets.

In addition to increasing tanker traffic in the port of Vancouver, the project would drive continued expansion of one of the world's riskiest and most expensive hydrocarbons: tarry bitumen.

Shut out, citizens speak up

In April, the National Energy Board limited the participation of 1,250 Canadians to letter writing on the Kinder Morgan project and told 468 Canadians they had no right to participate in the hearing process.

Several citizens support today's motion, which argues that the board's decision to limit participants actively limits freedom of expression and is "unreasonable and contrary to the principles of procedural fairness."

Lynn M. Quarmby, a resident of West Vancouver and professor of molecular biology, wanted to make submissions to the board on climate change and wilderness reclamation, thinking the scale of the Kinder Morgan project warranted such discussion in the public interest.

But the board didn't agree, and Quarmby decided that it would be futile to finish her application for standing.

Another citizen, Eric Doherty, a regional planner, wanted to question the pipeline's economic viability in light of bitumen's high carbon emissions and proposed future restrictions on the production of fossil fuels, as recommended by some of the world's major banks such as HSBC. But he was denied standing.

The outgoing chairman of the board, which Prime Minister Stephen Harper has described as one of his government's "allies" in Canada's resource wars, recently told the National Post that the agency couldn't study how pipeline projects may drive or affect the growth of the oilsands.

"It would become a trial of modern society's reliance on hydrocarbons, and that's clearly way beyond the mandate," chairman Gaetan Caron said. "It's clearly a policy question. That belongs to the world of policy-making and politics, in which we are not involved at all."

Last year, ForestEthics Advocacy and climate change scientist Mark Jaccard filed a lawsuit against the Government of Canada and the National Energy Board over the same rules that restrict citizen participation in public decisions about the energy industry.

The Trans Mountain hearing has also sparked an uproar over the issue of oral cross-examination. The board excluded cross-examination of witnesses for the hearing, a national first in the agency's history on projects requiring environmental assessments.

In its letter to the board, the Alberta Federation of Labour argues that the hearing "will not and cannot accord with the principles of natural justice and it will not provide the Panel with the tools it needs to properly answer the questions raised before it."

The cities of Vancouver and Burnaby have made similar applications. The government of British Columbia remains absent from the discussion.