The British Columbia government is dividing the Agricultural Land Reserve into two zones and loosening restrictions on how 90 per cent of that land can be used. 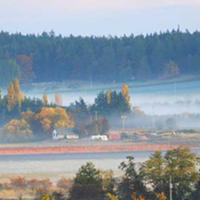 Why BC's Agricultural Land Reserve Is Worth Saving

While the ministers responsible and various stakeholders said the changes will give farmers in some areas more flexibility to generate income, critics say the government is messing with a system that for 40 years has successfully protected land used to produce food.

Presenting the plan to reporters a few hours ahead of introducing legislation, the minister responsible for the core review, Bill Bennett, said there would be no changes to the 10 per cent of the ALR that is in the Okanagan, South Coast and Island regions.

The new rules would, however, add economic and social considerations to decisions made about agricultural land in the North, Interior and Kootenay regions. While those areas include 90 per cent of the province's farm land, they account for 15 per cent of the amount of money farms generate in the province, he said.

"There's a huge, diverse land base out there [that] the media and frankly the public is largely unaware of," Bennett said. In much of the province, elevation, limited frost free days, long distances to market, and poor soil limit what can be grown, he said.

Farmers in those areas will now have more flexibility on how they use the land, but the legislation's primary goal remains protecting farmland, Bennett said. For 40 years the ALR has done a good job protecting land, but not protecting farmers, he said.

Steve Thomson, minister of forests, lands and natural resource operations, also spoke at the presentation. A former agriculture minister, he appeared on behalf of the current minister Pat Pimm, who has been away from the legislature due to illness.

It was unclear from Thomson and Bennett's comments exactly what uses are envisioned that are not currently allowed in the ALR.

The presentation included two examples of "challenges" created by the current rules. One was about a couple with a market garden whose proposal to have their daughter build a house on a rocky section of their land was denied.

The other was about the Agricultural Land Commission's refusal to authorize a land owner to extract gravel from as much of his land as he wanted. (The ALC oversees the ALR.) The ALC did allow gravel mining on part of the property, but the energy and mines ministry declined to allow it because the section was too small for safe operations, according to the presentation.

Bennett acknowledged in response to a question from reporters that both examples came from constituents in his Kootenay East riding.

The new rules will give the ALC more flexibility to approve things like food processing plants on farm land, Bennett said.

A government backgrounder said "acceptable uses will be determined through regulation in consultation with the ALC, the agricultural sector and [Union of B.C. Municipalities]." In other words, those uses are to be determined later.

Faye Street from the Kootenay Livestock Association was on hand for Bennett and Thomson's presentation in the legislature's press theatre. She was more explicit about what she'd like to see happen on farm land.

"I have said, and this is my perspective only, I don't care if my children want to build a prison on that land or a motel on that land, as long as their application shows me they're going to enhance the agricultural portion of that land with that application," she said. "We have to make some economic changes in order to establish the ability of our young people to keep producing food."

Asked how a motel or prison would enhance farm land, she said, "Because it would offer the off-farm income of being able to either lease, rent or sell that non-productive land and be able to add that economic ability to that portion of the agricultural operation."

Street said she would support oil and gas use of land in the ALR, if it were done on the portions that don't produce food. She also voiced support for a controversial plan to create a rodeo arena on an ALR farm in the Peace Region.

Both Thomson and Bennett in later exchanges dismissed the notion that motels, prisons or oil and gas operations would now be welcome, stressing that protecting farm land remains the goal.

"I'm extremely happy with what I heard today," Street said. "I really want to publicly state that I congratulate all three of these ministers, Minister Pimm, Minister Thomson and Minister Bennett, for having the three Bs in a male anatomy to get this done, starting at the brain, backbone, and work your way down. This is a very controversial issue as you all know."

Rhonda Driediger, the chair of the BC Agriculture Council, was more measured in her comments, but no less supportive.

"We're looking forward to these changes," she said. "The ALC is old and it hasn't really been updated for a long period of time. On a day-to-day basis it makes it very difficult in farming, especially when you're looking to be progressive. You're very, very restricted."

By "progressive" she said she meant people who are looking for ways to add value to the products their farms produce.

The New Democratic Party's agriculture critic, Nicholas Simons, called the changes "deceitful" in the legislature, a comment the speaker forced him to withdraw.

"Any changes need to be changes that are made with proper consultation," he told reporters in the hallway. The government is bringing forward legislation that makes major changes without consulting the public at all, he said.

"This system we've had in place for a long time has protected our food production lands," he said.

"This is not about helping farmers," he said. The changes weaken the ALR and the commission that oversees it, he said. "Once you start messing with that, you open it up to speculation, to further changes... When you shake the foundations of a building, the building doesn't do too well."

The changes send the message to land speculators that the ALR is temporary, he said. The province should be looking at how to protect farmland, not how to open it up to other uses, he said.

Simons noted that the rules governing the ALR already allow land to be removed if it is considered to be poor for farming. "This is about making the rules different," he said.

Environmental activist Vicky Husband said that a secretive process has led to a new policy on agricultural land that isn't in the public interest.

"It's all been done behind closed doors. It's a betrayal of the public trust,” she said.

It's a "no brainer" that a gravel pit should not be allowed on agricultural land, she said.

"Gravel pits, pipeline storage, pipelines going through, roads and whatever, it's going to be a free-for-all," she said. "They are destroying the ALC with this. They're claiming they're not, but of course that's what they are doing."

The zones the government will protect make up just 10 per cent of the ALR, which itself makes up just five per cent of provincial land, she said.