Imagine that you might, someday, want to farm for a living. Or imagine your kids might want to farm, or your grandkids. All over the world such dreams become harder and harder to achieve as land capable of supporting crops is paved over for roads or built into shopping centers or houses or is used for industry. 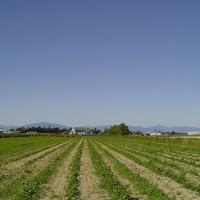 In B.C. during the 1960s and early '70s, we lost 6,000 acres of farmland every year to subdivisions and other non-farm activities. In 1972 there was a provincial election and farmers came together to ask all of the political parties to do something about the preservation of farmland before it was all gone. Every party responded to those concerns by talking about various solutions they might enact should they win the election.

In 1973 the new government created the Agricultural Land Reserve (ALR) to protect land capable of producing food. The new law was tough, and owners of land who wanted the right to sell it for subdivision or some other use were surprised and angry. Surprised because such zoning laws are rare in the whole world, and angry because if they ever decided to stop farming, they would only be able to sell their land as farmland (not to developers from whom they could make much more money).

But the people of B.C. liked the idea of protecting farmland, and surprisingly, the law has remained functioning on the books for four decades. Thus, if you or your kids or your grandkids want to farm someday, or if you want to be able to buy food from people who live and farm near you, B.C. is a good place to live to make those dreams come true.

The outfit responsible for supervising the Agricultural Land Reserve is called the Agricultural Land Commission and it is a group of people appointed by whoever is the government of the day. They have the very hard job of receiving applications from owners of farmland for various uses and deciding what is good for the protection of farming and what is not.

Back in the late 1990s, I was honoured to be the minister of agriculture. My friend John van Dongen was the opposition critic of agriculture for the Liberal Party. One day John rose in the legislature and accused me of conflict of interest in a case being considered by the Agricultural Land Commission. Conflict is a serious charge. A minister can, and should, lose their job if they are guilty of conflict. Even just the accusation of conflict implies the possibility of a serious breach.

I inferred from John's expression as he raised the issue that he didn't believe his claim to be true, and I knew it wasn't true. Later, the conflict of interest commissioner would research the charge and find it wasn't true.

While I was not, legally, guilty of wrongdoing or conflict, John's accusation was, nevertheless, justified. My point is that the relationship between any government of British Columbia and the Agricultural Land Commission is always fraught with difficulty. Provincial ministers charged with representing the interests of the Crown are, under any administration, frequently skating on the edge of real conflict in their dealings with the Commission.

But it cannot be otherwise. The Agricultural Land Commission is charged with doing the work of the angels in protecting land capable of producing food from development. Conversely, the government of the province is charged with doing the work of the devil in trying to make development happen in order to sustain an economy and employ people and get themselves re-elected. The interests of the two are at odds with each other, even in times when the government of the day is supportive of the Agricultural Land Reserve in principle.

Way ahead of its time

I live and produce food on land that I purchased prior to the creation of the ALR and still own. I love the Agricultural Land Reserve and hugely admire the politicians who had the guts and the foresight to put it into law so many decades ago.

When I had the honour to serve as minister of agriculture of B.C., I received separate visits from farmers from Ontario, Alberta, Tennessee and New Mexico who traveled all the way to our province to ask our advice. They all wanted to know how they might develop a similar law to protect their livelihood, threatened as it was by various forms of encroachment into farmland by other interests.

In every case I had to tell them that I did not know how they could enact such legislation in the face of modern pressures that would oppose them.

I also told them that if they could achieve sufficient political will to consider such legislation we would, of course, assist them in any way we could to write or to debate such legislation. But, I said, sufficient political will in this day and age was hard to imagine. If we hadn't seen fit to pass the law protecting farmland in 1973, there is no way we could manage to do so now.

Such is the debt that we, British Columbians, owe to those who made the ALR in the 1970s. It was possible then to consider such a vision, policy and law. It is almost unfathomable today to imagine a government, anywhere, achieving a similar objective.

A few years ago, a B.C. organization that speaks for corporatist values, the Fraser Institute, commissioned a report calling for an end to the Agricultural Land Reserve. The report disparages both Canadian farmers and consumers of food who desire to purchase food produced locally. The report is online and worth reading to understand that your dreams or your values may run counter to those of some people with a great deal of power in our society.

(That report, called "The BC Agricultural Land Reserve: A Critical Assessment" can be downloaded here.)

Following the publication of that 2009 report, we had an election in B.C. While the issue of the future of the Agricultural Land Reserve was not an issue in the election, the government that won the election appears to have decided to support the ideas of the Fraser Institute. (For more information see these recent articles in The Tyee and the Globe and Mail.)

That is why it is time for all of the people in the province who produce or eat food to rise up and defend the Agricultural Land Reserve. If we weaken it now, it will die.

Although the Agricultural Land Reserve may have been visionary and, therefore, hard for some people to accept way back in 1973, I think its time may have finally come. Everywhere I go people are beginning to talk about food, the quality of food, where it comes from and how it is produced. Young people, for pretty much the first time in my 65 years, are talking about wanting to learn to farm for a living. Village, town and city people are often even more interested in food issues than my neighbours in the rural area.

This might be the moment when both urban and rural people can build a coalition of consumers and producers to defend farmland and support farmers to define public policy in B.C. for decades to come.

At this moment in history, when everyone from the Fraser Institute to the provincial government seems to want to do away with the ALR, or manipulate it to serve their interest, the situation reminds me of that line we hear at weddings, the one that says "Speak now or forever hold your peace."

This is not a partisan issue. New Democrats wrote the law in 1973. It was sustained by Socreds for a quarter century. When John van Dongen rose to defend the Commission in the '90s he was a Liberal. I know lots of farmers and discerning consumers who vote Green. One of the strongest voices in defence of the ALR in the Legislature, Vicki Huntington, is an Independent. This issue isn't about your politics, it is about your values. Either your values, or those of the Fraser Institute.

And if you are moved to speak, I have thoughts about how you might go about it.

First, send this or some writing of your own to everyone you know who eats, gardens or farms to let them know what's happening.

Second, take an old-fashioned pen and some paper and write your thoughts in a letter to the premier of British Columbia. Your own thoughts. Do not bother with the ministers whose names have been attached to this issue. Ministers are supposed to try "trial balloons" to see if they are accepted by the public. They will not be the ones who decide whether or not to mess with the Land Reserve. The premier will make that call. Do not bother sending her an email. Emails do not make a stack on anybody's desk. Emails are not given the weight of a letter that you write yourself. A big stack of letters will not go unnoticed.

This issue will be resolved, one way or another, by the spring. Now is the time to choose to speak.