The federal government's simple fixes to Canada's Temporary Foreign Worker Program don't begin to solve some of the more serious problems, a Tyee reader-funded investigation has learned, with victims still being created both at home and abroad. 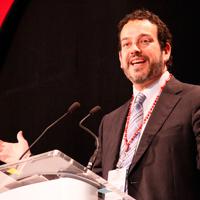 The Temporary Foreign Worker Program (TFWP) has been under intense scrutiny for a year after the United Steelworkers discovered advertisements for mining jobs in Canada requesting Mandarin as a language requirement.

Soon after, The Tyee discovered advertisements in China offering employment in Canadian mines for a hefty fee of C$12,500, more than a year's wages in some parts of China. The wages offered were also lower than Canadian residents doing the same job, according to unions.

The case ended up in federal court, and two unions that challenged the right of HD Mining to bring in foreign workers lost their court case after a judge threw out evidence key to the argument.

An investigation was also launched by the British Columbia government into the case of Chinese miners being charged a fee for jobs -- an illegal practice in the province.

The B.C. government said after an investigation that it found no evidence that such a practice exists, but would not release any evidence that it conducted an inquiry.

Around the same time, it was discovered that the company had applied for 90 more permits for such workers for another project.

Since the HD Mining scandal, the federal government made changes to the program it insists will help prevent abuse of not just workers, but companies, from exploiting it when there are Canadians available for work.

The changes include charging an application fee to employers when foreign workers are brought in, and the abolition of the ability to pay them 15 per cent less than market wages to make up for recruitment costs.

Despite the impact the changes were supposed to have made, in September about 300 workers at an oil plant near Fort McMurray, Alberta, found out they were being laid off -- replaced by temporary foreign workers, mainly from Ireland and Portugal.

Alberta Federation of Labour president Gil McGowan said the newest episode in the TFWP controversy proves the federal government has no intention of reining in the program.

McGowan points to the Alberta Occupation-Specific Pilot program, which takes away almost all barriers for employers looking for workers in a handful of specific occupations, as proof the real plan is to drive down Canadian wages.

The Alberta Occupation-Specific Pilot program was started in July 2012 -- just months before the HD Mining scandal broke -- when Canada's leaders were busy trying to calm fears of "insourced" jobs.

"At the very same time people like Jason Kenney were reassuring Canadians no one would be displaced by temporary foreign workers, the Harper government was actually introducing this new stream for oil sands-related construction, which will allow employers to do just that," said McGowan.

"It's clear to us that the promises that were made six months ago by people like Jason Kenney... were little more than political spin and ass-covering."

The pilot project focuses on positions such as welders, heavy-duty mechanics and carpenters.

It eliminates the need to get a labour market opinion showing there is a shortage of specific workers, or that the employer made efforts to find a Canadian for the job.

It requires the employer only "indicate" that the wages are comparable to the industry standard.

McGowan said that's about all that is known about the pilot because it's challenging to get any information from the federal government regarding the program. 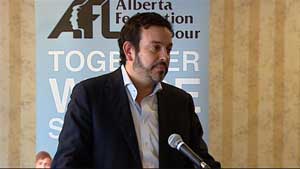 McGowan said he believes the federal government is intentionally suppressing the information.

The suppression of information is not new regarding the issue.

Shortly after The Tyee ran numerous articles on the HD Mining scandal, Alyson Queen, then a communications staffer for the federal ministry of Human Resources and Skills Development, stopped answering any requests for information or comment from The Tyee.

During the HD Mining court case, the federal government tried to argue it had no power to order the company to hand over documents showing it had tried to find Canadians to work in the mine near Tumbler Ridge, B.C.

As well, an information request for legal fees related to the scandal was not answered for months, eventually ending in a suggestion to file a Freedom of Information (FOI) request with another ministry.

One FOI request turned up an email from the Department of Justice, praising the government's legal team for a courtroom victory against the two unions fighting the HD Mining TFWP permits.

"Interim order denied, so no interim relief, I.E. no stay of the LMOs," wrote the department's director of communications for B.C. Lyse Cantin in an email. "Well done justice team!!!!"

Meanwhile, TD Canada released a study in October revealing Canada does not have a shortage of skilled workers, despite the federal government's assertions.

The 50-page report detailed how Canada's labour supply is in reality moving along "at a good clip" contrary to what the federal government and boosters of the TFWP argue.

"There had been clear signs in the early-to-mid 2000s that the healthy growth in aggregate labour supply was still being outstripped by aggregate demand of workers," reads the report. "However, the onset of the 2008-09 recession has since eased that concern."

Despite that, Canada is still bringing more than 300,000 temporary foreign workers into the country each year.

Victor Wong of the Chinese Canadian National Council points out the federal changes, which took effect in July, don't enhance protection of Canadian workers amidst the supposed skills shortage.

"There's not enough work," said Wong, adding that there's about five workers for every job opening according to Statistics Canada. "This language around labour shortages and skills shortages is not the reality faced by workers today in Canada."

Wong said salary increases and training would help convince Canadians to move to parts of the country with legitimate skill shortages to help fill their gaps.

"We also found out that many of the temporary foreign workers were unskilled workers going to work in the cities," Wong said. "And that just doesn't make sense because there's a high level of youth unemployment."

Corresponding to Wong's argument, an access to information request filed by the Alberta Federation of Labour that asked for every employer in 2012 using temporary foreign workers, revealed a majority of program users in B.C. were restaurants filling menial positions.

But while the HD Mining story and another about the Royal Bank using temporary foreign workers have been the axel for the controversy surrounding the program, there's a few more spokes on the wheel.

As immigration to Canada is promoted more due to the program, a number of people in impoverished countries are falling prey to fraudsters promising to help them make it to the Great White North.

Some of these companies are based in Canada, running lucrative frauds right under the noses of Canadian authorities, as The Tyee will explore in this series -- the product of months of reporting supported by a reader-funded Tyee Fellowship for Investigative Reporting.

The Canadian government said it takes immigration fraud seriously, but has basically said it bears no responsibility for fraud committed in relation to the program outside of Canada's borders.

"Canada cannot directly investigate matters in other countries, since the investigation and prosecution of third parties residing abroad is challenging," wrote the ministry.

British Columbia has taken similar measures, saying during the aftermath of the HD Mining scandal that it has no control over companies outside of its borders, even if they're charging workers to find them jobs in Canada, contrary to labour laws.

But in some cases the strife doesn't stop at the recruiting office.

Recently workers at a Tim Hortons in Fernie came forward accusing their boss of forcing them to give him a portion of their wages back to him in cash.

The scandal is the second incident of temporary foreign workers working at Tim Hortons alleging abuse, the first was Mexican workers who filed a human rights complaint for what they claim was abuse at a Dawson Creek location.

Amidst the allegations the doughnut maker's head office said it has no plans to strengthen its policy around temporary foreign worker use at this time.

"Tim Hortons and our restaurant owners have had a strong employment record since we started the Temporary Foreign Worker program," wrote public affairs manager Olga Petrycki. "Process requirements and standards exist in our system that go well beyond the program requirements, including compliance reviews and auditing. We continue to feel good about the process we have in place so that together with our owners, Tim Hortons can continue offering a strong working environment for temporary foreign workers and all of our teams."

Tim Hortons isn't the only major company to be using the program.

Fatburger locations, Dairy Queen, Wendy's and Overwaitea foods all appear on the list of companies that had Labour Market Opinions (LMOs) in 2012.

Those working on behalf of people employed through the program said it can be hard to find out just how well workers are being treated because many are scared to speak up, thinking they will be sent home.

Wong said the program will continue to be a problem for both Canadian workers and foreign workers sucked in by scams no matter how many changes are made.

"The more rules you create, the more scams will be created because you've made it so tough the only way you can come in is through tricks," he said. "Some folks might even have to quote unquote pay for a job."

His group is standing firm on a demand the federal government stop the program entirely until the Canadian labour market balances out on its own.

"You've got to hire local labour if you want income from the community," said Wong. "Your spending is my income, my spending is your income. If you don't hire me, I don't have income to spend, so your store gets no income from me."