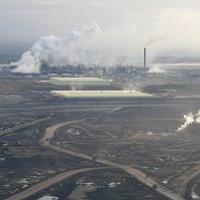 There's a simple logic to an "end pit lake." First you fill an old pit with waste and water, and then you wait for Mother Nature to make it right.

That, in essence, is one of the current major cleanup strategies for Alberta's oil sands. Syncrude received provincial approval last November to create the industry's very first end pit lake.

This spring, it will begin pumping freshwater from Beaver Creek reservoir -- about 200,000 beer kegs' worth each year -- into its Base Mine Lake tailings pond. That clean water will form a five-meter-deep "cap" on the toxic effluent below.

Syncrude expects heavier tailings waste to eventually sink to the lake's bottom, where bacteria will consume the bitumen, naphthenic acids and other substances that make it toxic.

Roughly 15 end pit lakes comparable to Syncrude's are being proposed in northern Alberta. But it could take multiple decades, or even centuries, for the one billion cubic meters of toxic waste potentially stored in them to safely break down.

That was the conclusion of Alberta's industry-funded Cumulative Environmental Management Association (CEMA), which produced a groundbreaking report on end pit lakes last October.

"There remains a long list of uncertainties," it read. The report, which stayed officially neutral on end pit lakes, nevertheless warned of their "potential for substantial negative and environmental and/or social impacts."

The independent Pembina Institute has also deemed the process "reckless", "risky" and "unproven."

Why would Alberta's major oil sands producers stake their long-term cleanup on a strategy with so many unknowns?

Likely because it's the cheapest tailings disposal option available.

But that is true only if everything goes according to plan. Relying too heavily on end pit lakes could result in "excessive" and "long-term" costs not anticipated by producers, the CEMA report read. Canada's clean technology innovators believe they offer better economic value and more certainty today.

"I personally don't agree with the notion" of an end pit lake, Wade Bozak, lead inventor and vice-president at RJ Oil Sands, a cleantech firm located outside Edmonton, told The Tyee Solutions Society. "Especially when we've shown that it is possible to take that [tailings waste] and remediate it."

Bozak is not alone in his thinking. A provincially-funded Alberta Energy Research Institute report published in 2010 came to a similar conclusion.

Written by David Devenny, one of Canada's most respected engineers and geologists, and an important figure in the early development of Alberta's oil sands, it argued that end pit lakes appear "to be a high risk option" for tailings cleanup.

What happens "if the end-pit lakes do not self cleanse?" asked Devenny. And "how do we fund" contingency plans, he added, decades after an oil sands mine stops producing income?

For Devenny, who declined to be interviewed by Tyee Solutions, the oil sands industry's focus on end pit lakes is symptomatic of a larger problem.

Because cleanup needn't happen until many decades into the future of an oil sands mine, he wrote, producers don't perceive it as an immediate financial threat.

It therefore makes economic sense for them to invest in solutions – like end pit lakes – with the lowest up front costs. The result, Devenny wrote, is "false short term profits."

He proposed that producers contribute to a "qualifying environmental trust" (basically, money set aside to fund cleanup) each time they disturbed new land.

It would encourage them to favour solutions "that involve lower risk," he argued, and "avoid transferring liabilities to future generations." Not only that, but in his opinion such an approach ultimately "reduces the developer's cost of reclamation."

Devenny also recommended oil sands producers reach out to Canada's clean technology innovators. Certain solutions developed outside the industry, he wrote, "should be appraised, and if successful, adopted."

Among the innovators Devenny named in his report was RJ Oil Sands.

"This is our technology set to music," lead inventor Bozak said at the time, gesturing towards a computer screen showing real time digital measurements of pumps, cells and oil recovery tanks. "It's really beautiful."

Bozak's technology uses electricity to pump oily wastewater through a phase separator, which cleans it of oil and allows the water to be recycled. It could be used to remove the 210 million barrels of bitumen potentially submerged in Northern Alberta's tailings ponds.

"Not only are you cleaning up the environment, you're extracting a residual resource," he said. "The economic value of that product would in turn pay for the operation."

When Alberta introduced its first major tailings regulation, Directive 074, in 2009, it required industry to steadily reduce the tailings waste it produces each year. Producers responded by investing hundreds of millions of dollars in new cleanup technology.

By 2015, Syncrude plans to spend $1.9 billion building its own centrifuge technology that separates waste from water, a major step forward in its remediation.

It's a proactive solution to a long-term problem. And one that Eric Newell, CEO of the company from 1989 to 2003, and now chair of Alberta's clean technology fund, thinks offers better value to producers than end pit lakes.

"I don't think it would have been acceptable to many of us to have big lakes all over," he told Tyee Solutions.

Yet more than a dozen end pit lakes are still being proposed as tailings cleanup strategies.

And no mine operator has yet agreed to commercially adopt Bozak's technology -- nor any of the other tailings solutions being developed by Canada's cleantech innovators.

"Our dealings with some of the majors are still ongoing," Bozak said. "It's very slow."

The disconnect between environmental impacts and their most optimal solutions, however, isn't always a function of cost. Sometimes it comes down to familiarity and comfort.

A March 2012 report from Alberta Innovates, a research group funded by the provincial government, evaluated nine different water-saving solutions for the oil sands.

The report focused on the "in situ" side of the industry, where bitumen is melted out of the ground with high-pressure steam, as opposed to traditional strip-mines.

Yet many of the newest "in situ" operators are instead choosing "produced water evaporation," the solution with the largest carbon footprint.

"The more experienced operators," he adds, "tend to be open for other options."

But even for those more established operators, it can be challenging to bring clean solutions forward.

Much depends though on how you perceive costs and opportunities.

Drilling a new well "might pay out much quicker" than making the operation greener, Hassan told Tyee Solutions. Yet Cenovus, he added, is also aware of the fact that "efficiency investments really generate a longer-term savings."

Most oil sands producers still prefer to focus on short-term profits. A 2010 report from the University of Alberta's Oil Sands Research and Information Network explained why.

Long before they extract their first bitumen from a mine, producers must decide which technology is best suited to the job.

That decision is "driven by technical factors," the report read, "and operating costs of the process itself. The costs of treating, remediating and reclaiming the tailings [waste] is not a major factor."

The result is a much narrower set of options for environmental cleanup.

"Let us be clear here," the report read. "We don't know that there is a technological alternative" capable of producing tailings waste that's "more easily and cheaply managed."

It added: "What we are saying is that if there were such an alternative, it is unlikely that it would be discovered."

Has the situation changed in the three years since the report was published?

Jones, along with the U of A researchers who helped create the report, believes oil sands producers should adopt a "cradle-to-grave" approach to how they plan operations.

It might recognize short-term profits sometimes result in long-term environmental costs. And that by addressing long-term liabilities today, producers could ultimately save money.

There's now a "heightened awareness" of such tradeoffs within the industry, Jones said. But he added: "We still have a ways to go."

In the meantime producers continue to push end pit lakes, Canadian innovators like Bozak struggle to sell their technologies, and environmental cleanup is pushed decades, or even centuries, into the future.

Geoff Dembicki's entire five-part series detailing "Five Opportunities to Clean Up" the oil sands can be found at the tail end of a larger series on how the oil sands can be done with less environmental damage while helping Canada shift to more renewable energy. That series, Greening the Oil Sands, is here.