[Editor's note: No slouching in that seat! This daily course launched on The Tyee has gone over the various ins and outs of climate change over six lessons so far, and it all ends this Friday. You can find previous installments and catch up by going here. Scientifically trained writer Eric Nadal has created a nine-part series made up of eight short, straightforward, simple to understand classes in climate change, followed by a quiz you will be able to take -- with a certificate to hang on your wall if you pass. Climate Cadet? Gaia Geek? Smarty Boots of Atmospheric Science? Graduates are invited to put whatever they wish on their next job applications. And the planet will thank you.] 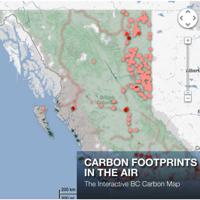 The Interactive BC Carbon Map

Earth's climate has "shock absorbers" that buffer occasional rapid injections of CO2 into the atmosphere from natural sources like volcanos. Oceans, forests and soils all absorb and lock in ("sequester") carbon, preventing it from becoming atmospheric CO2.

Indeed, one might say these carbon sinks have been bailing us out until now, keeping an astounding one-half of our fossil carbon emissions out of the atmosphere, where they would otherwise have doubled our climate forcing.

These sinks can be exhausted, though, becoming saturated by the build-up of CO2. Even more alarming, they can also release their stored-up carbon in response to heating.

Our most important sink, the oceans, could be reaching that critical juncture already. Oceans absorb carbon two ways: phytoplankton lock it up in their bodies; sea water holds it in dissolved form. But fewer phytoplankton mean less carbon is sequestered; or the water itself can become saturated, unable to absorb any more.

This is happening now in the North Atlantic, where detailed data show CO2 uptake fell by half between the mid-1990s and the mid-2000s.

On land, higher temperatures appear to be stunting growth in tropical forests, overturning the notion that higher CO2 levels would necessarily lead to greater plant growth and carbon fixation. Indeed, estimates for the entire globe indicate that total plant production has declined in the last decade, after large increases during the '80s and '90s.

Drought is also beginning to take its toll. The Amazon has been hit with two "once in a century" droughts in the last six years, killing enormous numbers of trees and releasing carbon in amounts that rival the annual fossil CO2 emissions of large industrial countries.

Warmer winters have wrought havoc in North American forests, unleashing pests like the pine beetle. Huge numbers of trees are dying, no longer capturing carbon but releasing it into the atmosphere. Meanwhile, increases in wildfires, aggravated both by dryer conditions and the tinder left by beetle infestations, have the same effect.

Hotter summers have been melting more of the ice that covers the Arctic Ocean, setting new records for open water with each passing year. That water is darker than the vanished ice, so it absorbs more heat, accelerating the process of ice loss. This "albedo" feedback may culminate in the loss of all the Arctic's summer ice within the next few decades -- allowing even more heat to be absorbed.

Perhaps the single greatest danger is that further forcing could defrost the tundra's permafrost, setting free vast new releases of carbon as organic matter decomposes in the melted soil. Studies indicate that as few as another 40 years of business-as-usual emissions could melt most of the world's near-surface permafrost to a depth of more than three metres. That would release about 200 to 400 billion tons of carbon, nearly as much as all human industrial activity has done to date.

Tomorrow: The role of uncertainty in bracing for our climate changing world. Find the series so far here.