[Editor's note: Today on The Tyee, reporter Luke Brocki continues his investigation into whether it's possible for a 30-something freelancer like him to own a Vancouver home. Follow his journey up until now, including a trip to scope out the suburbs and a look at the foreign ownership debate, by viewing the series page here. Find an introduction to the series here. Priced Out is a partnership between The Tyee and the CBC.]

I'm jolted awake by a battery of thuds. I shoot out of bed as windows rattle and the hits keep coming, slow and steady. What the hell? Is this the Big One? "At least I saw Paris" I think, as I throw on some pants and run outside in a panic. Moments later, I see the culprit is not a shifting fault line, but a smiling man in a massive yellow excavator digging through ruins of what just yesterday was the house across the street. 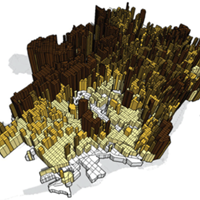 Who's Been Densified, Who Hasn't

The pounding continues with urgency for the next few days as machines dig out the foundation and fill numerous tractor trailers with rubble. Then, just as suddenly, all activity stops, leaving a black mound of fill dirt and a deep trench the March rain quickly turns into the biggest puddle in the neighbourhood. I'm not sure what the lot's new owner has planned, but nosy neighbours talk of a large single-family home. And that's precisely the problem, Gordon Price tells me on the phone.

"Right from the beginning, every first neighbourhood from Strathcona to the West End and all the subsequent ones (were) single-family lots," says Price, an urban planner who served six terms as a councillor with Vancouver's centre-right Non-Partisan Association (NPA) before retiring from politics in 2002. Today, he's director of the City Program at Simon Fraser University. "We're entirely a suburban city, and that becomes part of our DNA and an expectation that everyone is entitled to a single family lot," he says.

Single family lots certainly provide a high quality of life. With separate entrances, backyards, privacy and plenty of space, they've been the preferred dwelling ever since the baby boomer generation embarked on its car-fueled suburban expansion. But Price thinks it's time Vancouver introduced other housing options if it's serious about affordability.

Metro Vancouver's Regional Growth Strategy calls for the creation of compact communities with access to a range of housing options close to employment, amenities and services. And since land is limited, Price says discussions around new housing options should have less to do with geographic expansion and more with the creation of enough floor space to house our growing population.

"That means higher density, and that means you have to get into different typologies or forms of housing," he says.

The trouble is, implementing different forms of housing is easier said than done, I later hear from architect Michael Geller. Over the course of his 40-year career, Geller's dabbled in planning, property development and politics. He unsuccessfully ran as an NPA council candidate in 2008.

What's still missing, says Geller, is a zone that allows for higher density townhouses, stacked townhouses or fourplexes. Without it, city planners are losing out on innovative supply solutions that bring high density without high-rise developments. Density without height is important, argues Geller, because Vancouverites have a penchant for protesting against high towers they feel mar viewing corridors and destroy the character of beloved neighbourhoods.

Above all, Geller would like to see the city streamline its development approval process.

"We have managed to slow growth in Vancouver because of our approval procedures," he says. "Now I'm not going to get into a discussion as to whether growth is a good thing or a bad thing. All I am saying, since you and I are talking about housing affordability, is that the restrictions that are created through our complex approval process, especially the rezoning process, effectively restrict supply and increase the price of housing."

It's an unsurprising argument from a man currently at work on a North Shore development, but I also hear it from English journalist and author Matt Ridley, in his 2010 book The Rational Optimist.

Ridley says one of the reasons housing prices have continued to rise in some jurisdictions more than others is government use of planning and zoning laws to restrict supply: "The effect of these measures is to make life harder for those who do not yet have a house and massively reward those who do," he writes. "To remedy this, governments then have to enforce the building of more affordable housing, or subsidize mortgage lending to the poor."

For more on the issue of supply, I go looking for former Vancouver mayor Sam Sullivan, whose 2006 EcoDensity initiative triumphed density and design as solutions for a greener and more affordable city. Vancouver adopted the concept as official policy in 2008, and it has since inspired actions on basement and secondary suites, and most recently laneway housing options. I find Sullivan in Bogota on a speaking tour and we exchange thoughts via a series of emails. His most memorable argument is a simple one:

"It is quite interesting to hear the discussions about affordability. It is actually a very simple issue. There are only two things that influence price -- supply and demand," he writes. "Density is great for the environment, for the economy and for social dynamism. It directly challenges the values of the third wave of urban reform (a 1960s school of planning thought that saw politically-active urban baby boomers favour suburbanization over densification of central cores). There are people who talk about different forms of ownership as a way of controlling price. This is a distraction. Blaming it on foreigners is an embarrassment. The three things we need to do to get control of housing prices are supply, supply, supply."

That seems strange to me, if only because cranes and construction sites play an intimate role in my understanding of Vancouver. Still, the Urban Development Institute also insists supply is not keeping up with demand, pointing to figures of housing starts (the number of new housing units on which construction had started) compared to total population growth. 2010 immigration figures are the latest available from BC Stats at the time of writing, and they suggest the Vancouver census metropolitan area saw a total population increase of some 54,000 people from 2009 to 2010.

It's about now that I realize everyone I've been polling on the affordability issue -- from Price to Geller to Sullivan -- is a former (or, in the case of Geller, would-be) centre-right politician. Where's the ruling centre-left on this? I'm going to need the man in the big chair to balance these findings, so I call the mayor's assistant and ask for a sit-down with Mayor Gregor Robertson. He promises he'll set something up but says it will take a bit of time to arrange. That's fine by me. In the interim, I've got a hot tip about a series of early-morning meetings filled with interesting thinkers somehow still undiscovered by the local media.

Tomorrow: Lessons on affordable home ownership from Whistler and Toronto.