[Editor's note: With wildly expensive housing in Vancouver, what's a 30-something creative type longing to own to do? That question took reporter Luke Brocki on a month-long journey to find out: can he ever feasibly own a home in the rainy city? In partnership with the CBC, today kicks off a new series that wades into the murky housing market to find out how it's gotten so hard to break in, and whether people like Brocki stand a chance. To hear and see more perspectives on this series, tune in to CBC Radio's On the Coast at 5:40 p.m. and watch CBC News Vancouver at 6 p.m.]

It's the end of February in Vancouver and a little layer of snow is slowly throwing itself at my garden beds, but indifferent garlic shoots bring proof that spring is in the air, which means it's nearly time for the year's big real estate push. And if I know anything about real estate, it's that it's an emotional affair. Those annoying conversations that come along this time of year usually start something like this: 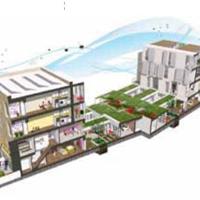 "I don't miss renting one bit."

"Mine went up 15, which is ridiculous and I'm filing a complaint."

That last one is me. As befits the son of two immigrant labourers, most of my real estate knowledge had until recently come from Canadian self-help bestseller The Wealthy Barber and Mordecai Richler's The Apprenticeship of Duddy Kravitz. Taken together, they make me want land as an investment, but also make me worry a good deal about social isolation. And that's pretty much what this is all about: I want to buy real estate, but don't want to live in a shoebox or deep in the suburbs.

Ignoring all conventions of freelance writing, I pitched this dilemma to the Tyee and then again to the CBC, and somehow ended up on a month-long search for affordable home ownership options for me and other 30-something creative types. Can I afford to keep living here? I'd like to avoid the suburbs, because I've lived in them most of my life in Poland, Germany, Toronto and several places around Metro Vancouver before building a great community in East Van.

It's also taken me some five years to hustle together enough freelance income from local newsrooms and magazines to live a comfortable lifestyle, one filled and inspired by artists, musicians, comedians, designers, entrepreneurs and other types of creative nerds. Many of those folks are also renters in East Van, which is where I'd like them to stay, but a few leave every year, either to far regional suburbs or to wintrier cities in other time zones. All claim financial reasons.

That worries me too, but can you blame them? How long can you leave your savings at two per cent interest in so-called high-interest savings accounts when land prices are ballooning ever higher to the delight of those already invested in real estate?

For starters, I must admit my desire to buy real estate is selfish: I think real estate equity may become a key ingredient of my happy retirement. If you know of other equally lucrative investment opportunities for a guy not expecting any legendary pensions, please write or call anytime.

In the interim, I'll keep cringing at data from the BC Assessment Authority -- its latest release shows the average value of a Vancouver home shot up 16 per cent last year, continuing along a path of near geometric growth.

I have no idea how long such growth can continue, but I'm also sick of feeling like a sucker in this market and curious if my life savings can at least get my name on a land title somewhere. At first glance it seems impossible. In 2009, Douglas Coupland called real estate Vancouver's biggest sport: "Real estate agents are local celebs of sorts, and the weekly homes section of the paper is scrutinized like a fortune cookie. Those people who own property resemble Microsoft employees who check their computers every few hours to see their net worth go up. . . or down."

In late 2011 came a report on housing trends and affordability by RBC Economics Research that knocked me on my ass. It found a would-be buyer of the average-priced Vancouver bungalow ($820,000 through Q3 of 2011) needed a qualifying income of $154,500. To qualify for financing for a standard condo (worth some $420,000), a would-be buyer needed an income of $80,500. In an average year I make just over half that, while the city keeps getting more expensive.

Earlier this year, Vancouver ended up atop a list different from the usual most beautiful and most desirable accolades: according to British business magazine The Economist's annual Worldwide Cost of Living survey, Vancouver was now the most expensive city in North America and 37th in the world. The 2012 Demographia International Housing Affordability Survey by American public policy consultant Wendell Cox brought more bad news: it divided Metro Vancouver's median house price ($678,500) by its median household income ($63,800) to come up with a median multiple of 10.6 on a scale on which "affordable" was 3.0 or less.

The study then ran the same calculation across 81 major metropolitan markets and found little old Vancouver was the second most expensive city in the world behind Hong Kong. (On the other extreme, Detroit was found the most affordable city with a score of 1.4.) What are the job prospects for journalists in Detroit, I wonder. Is that where I'll have to move to build equity? My friends call me a masochist for staring at computer screens flickering with out-of-reach property listings, but they always gather around to sneak a peek, trembling fingers pointing to Vancouver's unbelievable land prices, others dancing on keyboards to find detached homes in other cities for the price of tiny Vancouver condos.

In search of home

"Are we going to be a resort town for the super-rich from all around the world, or a functional, integrated city?" he wrote in the book's concluding essay, alluding to the city's increasingly difficult decisions ahead as civic leaders decide what kind of a city they want to build. "For the first time in years, some Vancouverites are willing to admit that betting an entire economy on the guaranteed exponential increases in value of a $700,000 one-bedroom condo in an algae-streaked building on a major seismic fault line may not, in fact, be the most sane way of doing things."

This series is about finding another way and answering some questions that have been keeping me up at night: Why are housing prices so rapidly and decidedly outpacing incomes in Vancouver? Is there any truth to tales of rich offshore investors parking their money in local real estate, or are they just protectionist anecdote and conjecture? Are we building enough supply to keep up with demand, both in terms of volume and types of housing options? How does the building approval process affect housing prices and could it be streamlined? Are there home ownership lessons to be found in other jurisdictions? What does Vancouver's newly assembled affordability task force hope to accomplish?

And, since policy and planning generally take a long time to bring change, are there any financing innovations to help a guy in my position buy something right now, ideally something I don't hate for being too tight or too far away?

Tomorrow: I assess my finances with a mortgage broker and head out house-hunting.