What do Tea Party rallies, Republican victories, climate change deniers, Wisconsin's anti-union push and attacks on a cap and trade market for carbon emissions have in common? 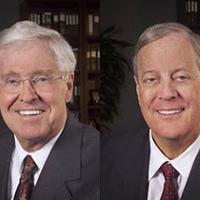 They're all fueled in part by profits derived from Alberta's oil sands.

Those profits, flowing to a single company, are helping bankroll a libertarian offensive that many observers think is shifting America's political culture profoundly to the right.

One of the central tenets of that campaign is a disbelief not only in the pressing risks of climate change, but that humans are even causing it.

That article of faith is now being embraced by the American public, with only 51 per cent concerned about global warming, compared to 66 per cent three years ago.

And it's no exaggeration to say that the roots of this campaign can largely be traced back to two powerful businessmen: Charles and David Koch. Together, America's fifth-richest citizens -- each worth $21.5 billion -- own Koch Industries, a refining, pipeline, chemical and paper conglomerate.

They manufacture common household products such as Brawny paper towels and Stainmaster carpets. They're also one of the biggest refiners of Alberta oil sands crude, handling an estimated 25 per cent of all imports entering the U.S.

Any time a clean energy law threatens to impact those operations, the Kochs fight back hard. Not content anymore to wage war from the sidelines, the brothers and their allies have now installed themselves at the heart of Republican power in Washington, D.C.

Never before in the U.S. has the oil sands industry enjoyed such direct political influence.

Kochs pulled out of shadows

Despite being America's second-largest privately run company, Koch Industries was virtually unknown to the wider public until last spring.

That was when Greenpeace released a report detailing how the conglomerate had funneled tens of millions of dollars between 2005 and 2008 to groups skeptical that climate change exists.

Such activism is central to the Koch brothers' hard-line libertarian ideology, which espouses a general distrust of government control.

The brothers are now widely thought to have been one of the driving forces behind the Tea Party movement, founding an advocacy group called Americans for Prosperity which has provided critical funding and logistical support.

Americans for Prosperity played a lead role in the Republican takeover of congress in last December's midterm elections.

In one, average-looking Coloradans filmed in front of rancher's fields lambast Betsy Markey, their representative, because she "voted for cap and trade, the new energy taxes that would cost Colorado thousands of jobs."

Putting together a Tea Party

At the same time Americans for Prosperity helped coordinate and organize Tea Party rallies from coast to coast.

Drawing upon an often confusing mix of grassroots idealism, government distrust and oil company mandates, the movement endorsed right-wing candidates across America, many of which were elected to the House and Senate last year.

Though David Koch denied any links to the Tea Party movement, an unnamed Republican insider quoted by The New Yorker thought otherwise.

"The Koch brothers gave the money that founded [the Tea Party]," he said. "It's like they put the seeds in the ground. Then the rainstorm comes, and the frogs come out of the mud -- and they're our candidates."

It's highly probable that at least some of that money came from Koch Industries' major investments in Alberta's oil sands industry. 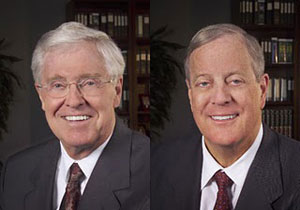 Flint Hills Resources, a fully owned Koch subsidiary, operates a Minnesota refinery capable of processing 320,000 barrels of crude a day, about four-fifths of which is sourced from Alberta.

To put that in context, SolveClimate News recently estimated that this single refinery handles one quarter of all oil sands crude entering the U.S. That would make Koch Industries one of the top players in the industry.

(It's not clear exactly how much revenue that refinery brings in, because the company is privately held and doesn't make those figures publicly available.)

Oil sands crude requires more energy to produce and refine than conventional oil, generally resulting in much higher greenhouse gas emissions. Refineries that depend on it are especially vulnerable to the types of clean energy legislation proposed in growing force over the past few years.

Koch Industries appears to be particularly attuned to global warming laws which could hurt its bottom line. The company was one of the first oil firms to lobby directly against a national low carbon fuel standard in 2007, filing records that state: "Oppose restraints on production and use of energy."

Since then, as previous reporting in this series explained, fuel standards have become one of the fiercest battlegrounds in Washington's war over the oil sands. Those laws, if ever enacted, could be equivalent to taking 30 million cars off the road by 2020, according to research cited by Barack Obama during his presidential election campaign.

They would do this in part by discouraging American suppliers from using road fuels derived from Alberta's oil sands and other high-carbon sources -- precisely the type of fuels that Koch-owned Flint Hills Resources produces.

As Koch Industries notes on its website: "[This legislation] would be particularly devastating for refiners that use heavy Canadian crude oil because the policy seeks to discourage or even prevent the U.S. from benefiting from this essential, reliable resource."

For the time being, it appears the Koch brothers have little to worry about. Every attempt so far to enact a national low carbon fuel standard has been scuttled by intense fossil fuel lobbying, sometimes with the "support" of the Canadian and Alberta governments.

And the last midterms elections produced a Republican stronghold generally hostile to the very idea that climate change is even a problem, much less one that should be addressed.

Koch wields considerable influence in this new political environment, especially on the powerful House Energy and Commerce Committee, where it contributed $279,500 to 22 of the panel's 31 Republicans, the largest donation of any oil and gas player.

Already, the Republican majority in the House voted to cut all American funding for the United Nations' Intergovernmental Panel on Climate Change, one of the lead organizations studying global warming.

And the House Energy Committee continues to push legislation that would eliminate the U.S. Environmental Protection Agency's authority to regulate greenhouse gases.

The rationale for such an attack was laid out in a Wall Street Journal op-ed last December, co-authored by Energy Committee head Fred Upton (a Michigan Republican), and Americans for Prosperity leader Tim Phillips.

They called the EPA's plans to reduce America's carbon emissions "an unconstitutional power grab that will kill millions of jobs -- unless Congress steps in."

Last week, Democrats on the energy panel introduced amendments that would have forced their Republican colleagues to acknowledge that global warming poses major environmental threats.

All 31 Republican members declined to vote in favour of the amendments, claiming instead that the science around climate change "is not settled."

Koch Industries has not restricted its growing political activism to Washington.

In Wisconsin, early versions of the state's Clean Energy Jobs Act contained a low carbon fuel standard. But state policymakers dropped that provision last May, possibly a result of nearly $400,000 in Koch lobbying (not to mention pressure from the Alberta and Canadian governments).

The Koch brothers appear to have also played an instigating role in the Wisconsin labour protests. Their company was one of the biggest funders of Republican governor Scott Walker's election campaign. Walker, once in office, proposed spending cuts targeting union benefits and bargaining rights, causing a massive public backlash.

Americans for Prosperity executives reportedly encouraged the labour showdown even before Walker was sworn in. The group is now working with policymakers and activists in Indiana, Ohio and Pennsylvania to slash their union spending.

While all this was happening, Americans for Prosperity was coordinating a public relations campaign to kill cap and trade in New Hampshire.

During the lead-up to the vote, Americans for Prosperity paid for automated phone calls to citizens across the state, urging them to support the bill. It passed recently with a wide margin, effectively terminating New Hampshire's long-term climate change plan.

And that's not all, wrote AFP's Phil Kerpen afterwards. "In the process, it could deal the death blow to cap and trade both regionally and nationally."

That'd be a huge win for Koch Industries, which wouldn't have to worry about the high emissions caused by refining Alberta oil sands crude, at least until the next clean energy law was proposed.

In the meantime, the Koch brothers hope to consolidate political control over not just Congress, but the White House too. Watch for their hand in the next presidential election, where the Kochs plan to raise $88 million to advance a conservative agenda.

Tomorrow: An insider's account of how the Canadian and Alberta governments attempt to neutralize opposition within Congress to Keystone XL.