What's an excellent day for Tom Corcoran? A day when a U.S. clean energy law dies on the battlefield. 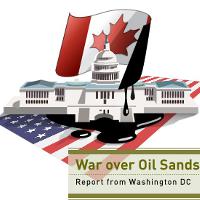 In America's Capital, a Fierce Fight over Oil Sands

Corcoran is a former Republican congressman who now advocates on behalf of Alberta's oil sands. Since 2008, he's played a lead role in a lobbying campaign orchestrated by the world's wealthiest oil companies and the Canadian and Alberta governments. This fossil fuel-friendly coalition has pressured -- often successfully -- against any U.S. clean energy law targeting the oil sands industry.

Corcoran has agreed to meet me at the Capitol Hill Club, an exclusive social hub for Republicans blocks from the Capitol building in Washington D.C. For more than 60 years the club has served as a "refined and elegant" hangout for presidents, vice-presidents, governors, members of Congress and "influential Republicans everywhere," according to its website.

As I wait outside the bone-white, four-storey townhouse, a well-coifed and expensively dressed man paces back and forth, talking fast into his iPhone. "I'm not saying the damage is irreparable, but I wish you'd kept me in the loop..." The 71-year old Corcoran arrives right on time. We exchange pleasantries and walk inside.

The reason I'm in Washington is to learn how a sparsely populated Canadian province landed at the centre of the most wide-ranging climate change debate in United States history. The immediate answer is obvious. With one of the very largest known oil reserves on the planet, Alberta is the single most important supplier of crude oil to America.

Environmental groups argue that in a rapidly warming world, this is no time for the United States to grow dependant on the world's most carbon intensive oil.

Corcoran's brigade, meanwhile, vigorously opposes any limits on Alberta oil sands growth, framing their multi-billion dollar industry as a vital source of American energy security that could be wiped out by tough clean energy legislation.

If Corcoran is a top field marshal in the War Over the Oil Sands in Washington, this visit with him today, I am hoping, will help me see how he reads the battlefield, the arguments he uses for ammunition, his strategy for total victory.

As it turns out, I won't be disappointed.

There's no mistaking the Capital Hill Club for anything other than a Republican stronghold. Just inside the front doors, Corcoran leads me past two large elephants carved from dark wood. In the lobby hangs a painting of George W. Bush (a smaller portrait of his father adorns the hallway to the men's washroom). Two key architects of the Tea Party movement -- Koch Industries' David Koch and Americans for Prosperity's Tim Phillips -- invited new Republican legislators to a welcome party here, shortly after their side won back the House of Representatives in December's midterm elections.

We take the elevator downstairs to the Auchincloss Grill. Imagine a cross between a sports bar, Royal Canadian Legion hall and a rich friend's dad's basement. Corcoran and I sit at a table near the entrance. I ask him how a four-term Illinois congressman who resigned in 1984 became interested in the frigid hinterlands of northern Alberta.

"We've got the moral responsibility to help people do what they want, so they can develop themselves," he explains to me between sips of coffee. "Oil is a big part of it."

As he goes on to elaborate, it becomes clear that to understand Corcoran's read on his enemy, you need to know something about a provision named Section 526 in the 2007 Bush-era Energy Security and Independence Act.

For decades Alberta's oil sands were considered an "alternative" source of oil too costly to be developed on any major commercial scale. A swift rise in oil prices about six years ago caused the industry to explode virtually overnight, transforming Alberta into one of the world's most promising suppliers of fossil fuels.

It wasn't long though before this newfound prosperity was threatened by emerging clean energy laws in the United States. In 2007, climate-concerned policymakers led by Democrat congressman Henry Waxman managed to insert provision 526 into the Energy Security and Independence Act. Put simply, the provision made it illegal for U.S. government agencies to buy unconventional fuels with large carbon footprints. Though its ambiguous wording is still a source of contention, Waxman soon made clear he meant for the law to apply to fuel imports from Alberta's oil sands.

"This provision," Waxman wrote, "ensures that federal agencies are not spending taxpayer dollars on new fuel sources that will exacerbate global warming."

Canadian embassy staff were hard-set against Waxman's interpretation. They worried the law could set an "important precedent" for future -- and wider -- limits on the oil sands industry, according to internal emails obtained by the Pembina Institute. "We hope that we can find a solution to ensure that the oil keeps a-flowing," wrote the embassy's Jason Tolland in early 2008.

The relatively frictionless approval of Section 526 was quite unusual, in fact, for a political scene dominated by interest group politics. "It was just one of those funny stories in Washington where this section [526] was overlooked," Greg Stringham from the Canadian Association of Petroleum Producers told IPS news.

"I don't think Canadians or oil companies knew about this section," he added.

That ignorance didn't last too long. Canadian embassy staff had by early Feb. 2008 flagged the provision to the American Petroleum Institute, Exxon Mobil, BP, Chevron, Marathon, Devon and Encana, internal emails reveal. "As yours is a company involved in the production of oil sands in Canada," then-energy counsellor Paul Connors wrote to an Exxon Mobil lobbyist, "I wanted to bring this issue to your attention."

The American Petroleum Institute soon formed a working group to monitor the provision. That group met with Canadian embassy staff and representatives from Alberta's Washington office in early February. Canada raised its concerns through official diplomatic channels as well. Then-American ambassador Michael Wilson wrote to the U.S. Secretary of Defence that month, stating that Canada did not want to see Section 526 applied to fossil fuels produced from Alberta's oil sands.

It was around this time that Tom Corcoran entered the scene. The former Republican congressman was born in 1939 in the rural community of Ottawa, Illinois. Growing up, he rode a yellow school bus each day past farmer's fields. As he tells it, there's little distinction between North American security, personal freedom and an abundance of fossil fuels. Oil helped "people do what they want."

Corcoran began talks in late 2007 with the American Petroleum Institute and other major oil industry players. Their goal was to form a group that could help maximize the amount of unconventional fuels powering the United States. These are fuels -- such as oil sands, heavy oil and oil shale -- which exist in huge quantities across North America yet require much more energy to produce and refine than smooth-flowing traditional crude.

Without major technological improvements, the upshot of their full-scale development would be massive greenhouse gas emissions, a nightmare scenario for many environmental groups.

But with Canada's oil sands industry booming, Corcoran decided to focus his efforts mainly on northern Alberta. In the summer of 2008, he and his allies launched the newly named Center for North American Energy Security, a powerful lobby group with oil majors such as Exxon Mobil and ConocoPhilips as members. Its first plan of attack: repeal Section 526.

Tomorrow: How Corcoran's group launched a full-scale campaign -- alongside the Canadian government's own efforts -- to kill Section 526.