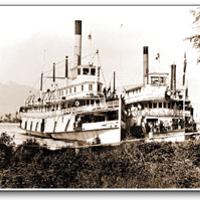 When Nature Smothers the Past

It was pitch-black when a roar and rumble rocked Mt. Meager. These are the unmistakable signs of disaster in a region classified slide-prone. When word of a landslide reached Pemberton, some 70 kilometres south of the Meager region, David Steers was among the first dispatched by helicopter early on Friday, August 6. He and his colleagues with Pemberton search-and-rescue were tasked to reach the disaster site, evaluate the damage and rescue any people. Only later would he learn that the roar in the night had registered a 2.6 on the Richter scale, and would amount to one of the largest landslides in Canadian history.

When Nature Smothers the Past

Steers and his colleagues arrived in the region as morning was unveiling the damage. Flying north, the scope of the slide was revealed to Steers by degrees. "Going up the Lillooet River, we could tell the water level had dropped considerably," he recounts. "The farther north we got, the less water we could see." But it was only when the helicopter turned a bend in the river that the magnitude fully sunk in: the debris field stretched to a vanishing point in the distance. "People describe being dumbstruck," he says. "When we turned that corner, that's the only word for it. We all just sat there staring. Someone occasionally said, 'Wow.' That's about it."

The omens went from bad to worse when the helicopter eventually reached the peak of Mt. Meager, where the slide had originated. "That's when I realised the whole damn mountain had fallen down."

What Steers and his colleagues saw on their mission is documented in the incredible series of photos he published to Flickr, a selection of which you can click through and view at the top of this story. Steers' photos represent the only comprehensive collection of this historical landslide currently available, taken by one of the very first people on the scene.

"I've seen floods across the Meager before," Steer says, "but nothing ever like this. Our immediate concern was the dam." The debris had slid some 10 kilometres, settling on top of the confluence of Capricorn and Meager creeks, which created a natural dam, preventing Meager Creek from draining into Lillooet River.

Three million cubic metres of water pooled behind this dam, which by Friday night was threatening to breach and flood the Pemberton Valley. Fears of catastrophe prompted officials to evacuate 1,500 people from their homes and to place an additional 2,500 on alert, a move Steers believes was "the right call."

Due to the diligence of officials and search-and-rescue teams like Steers', no one has been reported injured. But as of Saturday morning, several people remained missing.

"We were tasked with recovering two hikers," Steers says. "We didn't know what their route was. We had some info from the RCMP that didn't help much. To be honest, I didn't have much hope we'd find them." After checking all the major sites to no avail, Steers was thinking, "This isn't going to end well." But then someone in the helicopter spotted two men walking casually down a path.

"They hardly even looked at us as we flew near them, low and slow. They weren't paying much attention. When we eventually caught up with them, we said, 'Boy are we happy to see you!'

Only when the two men shared a sight of the damage from the vantage of the helicopter did they realise just how close they'd come.

Other lucky campers were recovered by Steers' team, including a group who had heard that sound in the night growing louder and louder, and approaching. Not able to tell what it was, Steers says, "They just ran for the hills. The slide barely missed them."

Over the course of these search-and-rescue flights, Steers accumulated his collection of images, but it wasn't easy.

"I remember having a very British Columbian thought," he says. "I remember thinking, 'Damn it all! I'm having trouble taking photos of the landslide because of smoke from forest fires!'"