"If I have to sit here in an empty courtroom by myself, the matters are going to be heard." 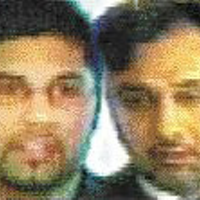 Railgate, A to Z

Today marks the astonishing sixth anniversary of the unprecedented police raid on the British Columbia legislature -- and the sixth year without a trial in what may be the biggest political corruption case in the province's history.

The case involves blockbuster allegations that two former B.C. Liberal government ministerial assistants gave confidential government information about bids for the $1 billion 2003 privatization of B.C. Rail to a lobbyist representing one of the bidders, while a third former government aide laundered bribe money.

It also features defence allegations of a massive cover-up to protect current and former top B.C. Liberal cabinet members while hanging the government political staffers out to dry -- and allegations of political dirty tricks directed straight from staff in the office of Premier Gordon Campbell.

For political observers, a lengthy trial featuring witnesses potentially including Campbell himself would be like Christmas every day, with startling allegations and grueling cross examinations of major political figures.

And the trial of David Basi, Bob Virk and Aneal Basi -- the accused three -- will either begin, or be dismissed, in 2010.

It's become an annual ritual to predict when the charges of breach of trust and fraud against David Basi and Virk and money laundering against Aneal Basi will start -- a prediction without success for anyone covering or following the case.

But as the quote above illustrates, even then-trial judge Bennett's fondest wishes to get things moving were thwarted by circumstances beyond her control.

"We need to accomplish something with this case so we can proceed in mid-March," Bennett said on Oct. 26, 2007, referring to an anticipated trial start in 2008.

So what makes 2010 different? Several important factors, not least being the disposition of a Supreme Court of Canada appeal by special prosecutor Bill Berardino on the key issue of whether testimony about and by a secret witness could take place with the defence lawyers, media and public excluded.

That testimony by a police informer will be allowed, the nation's highest court ruled, ending perhaps the most significant delay in a case marked by seemingly endless legal road blocks.

Also key may be the replacement of Bennett, who was promoted to the B.C. Court of Appeal, by Justice Anne MacKenzie. The new judge's no-nonsense approach has frustrated the defence team, as they have lost several rulings on disclosure of evidence.

Lastly, the Court of Appeal for Ontario made a potentially precedent-setting ruling that may ensure the Basi-Virk case goes to trial when it overruled a lower court decision to stay charges in a complicated police corruption case because it would have been 56 months before that trial could have been completed.

If nearly five years of delay is not enough to stop an Ontario case, can the defence expect MacKenzie to rule a similar length of time from charges to trial in a far more complex case is an "unreasonable delay"?

Defence has a few hands to play

But the veteran lawyers representing the accused have two kicks at the can in attempting to have charges against their clients stayed -- the legal term for not proceeding with trial without the charges being dropped.

The defence begins a Charter of Rights application on Jan. 11, 2010, on its contention that the trial has not begun because of "unreasonable delay."

But the defence will also argue an abuse of process application, presumably alleging that the police investigation was unfair and conducted inappropriately based on a wide variety of strange circumstances.

Those allegations include the fact that a senior RCMP investigator in the case, Inspector Kevin DeBruyckere, is the brother-in-law of B.C. Liberal Party executive director Kelly Reichert; that David Basi's mother sold a house to RCMP officer and prominent case investigator Andrew Cowan prior to the raid that Cowan was unhappy with; that the defence alleges the RCMP were asked by Reichert not to press additional charges against Basi because they would "embarrass" the party; and allegations that the RCMP knew key Crown witness Erik Bornmann -- a former lobbyist and both provincial and federal Liberal Party insider -- lied to the media in saying he had been cleared of any wrongdoing despite his own allegations that Basi and Virk were paid bribes for supplying him with confidential government information.

Notwithstanding the possibility of charges being stayed and the case coming to a shocking and complete halt, if the trial proceeds many devastating questions will be answered and the fate of several political careers quickly decided.

Here are just some of the outstanding issues that a trial may resolve.

Perhaps the biggest question will be answered before a trial begins -- could there still be a plea bargain by the accused to avoid a trial -- and possible jail time?

That seems unlikely. While the B.C. Liberals would desperately love the case not to proceed, special prosecutor Bill Berardino is an independent prosecutor who does not answer to the government, nor is he likely to want to approach the end of a lengthy courtroom career with a plea bargain in a case he thinks he can win.

It would also appear difficult to negotiate a plea bargain that would ensure the defendants legal costs are paid by the B.C. government despite their accepting any responsibility for the actions they are alleged to have taken. Because all three were government employees, they have an indemnification agreement which means if found not guilty, their legal costs are paid for by the province -- if judged guilty, they are on the hook for massive legal fees on top of sentencing.

The trial will feature considerable testimony on the role of the B.C. Liberal Party in paying David Basi an alleged $20,000 outside of his government position for "media monitoring" that the defence claims is a euphemism for political dirty tricks.

The defence made a series of bombshell accusations in court in the spring of 2007, including that Basi coordinated phony callers supporting the B.C. Liberals to flood radio talk shows; that he organized phony protests outside the B.C. Federation of Labour convention and hecklers to disrupt an environmental protest against salmon fish farms; that Campbell knew of Basi media interventions on his behalf; that Campbell's former press secretary Mike Morton and former caucus communications director Mike McDonald were directly involved with Basi's talk radio actions; and much more -- some of it allegedly intercepted by police wiretaps.

But perhaps an allegation that Reichert and the RCMP discussed additional criminal charges against David Basi over political dirty tricks -- with Reichert asking they not be pursued and that Campbell was informed -- could be the most explosive of all.

Virk's lawyer Kevin McCullough told the court on May 15, 2007, that he was reading from an RCMP report titled: "Kelly Reichert -- Do Not Disclose" that was eventually disclosed to the defence.

"Careful consideration will have to be given to the wishes of the victim. The likelihood of successful charges versus the embarrassment to the victim," McCullogh said the RCMP report stated, referring to the B.C. Liberal Party as the victim.

"The wishes of the Liberal Party and Mr. Reichert, the same day he notifies the Premier, all came true," McCullough concluded, noting that charges were indeed never approved against Basi for those activities.

"We have the effort by Reichert to not have the charges approved. That reeks of political interference," McCullough alleged.

It should be noted, as with all allegations made to date, that they have not been proven or contested in court. Both Reichert and several spokespersons for the B.C. government have repeatedly declined comment on the case, saying it is "before the court."

While the B.C. Liberals have been in the crosshairs of defence attacks for some time, the news of the B.C. legislature raid initially appeared to involve the federal Liberal Party -- a separate organization from the provincial party -- far more.

David Basi first came to my attention before the raid because of his activities on behalf of then-federal finance minister Paul Martin in his war to replace Prime Minister Jean Chretien as Liberal Party leader.

Basi was alleged by former federal Liberal cabinet minister Herb Dhaliwal to have been the organizer behind taking control of his riding association on behalf of Martin.

Erik Bornmann, the Crown's key witness who allegedly provided money and benefits in exchange for information on B.C. Rail, was a former Martin aide in Ottawa and an executive member of the federal Liberal Party in B.C.

Police went to the house of key Martin supporter Mark Marissen and his then-wife Christy Clark -- Campbell's former deputy premier and now a CKNW talk show host -- to ask questions about Basi and Virk -- Marissen has made clear that he cooperated fully and his home was not the subject of a search.

The home of Bruce Clark -- Christy's brother -- was the subject of a search warrant by police at the same time as the legislature. Bruce Clark also served as a Liberal Party of Canada -- B.C. branch executive member and key fundraiser, as well as a Martin supporter. As recently as February 2009, Clark was still involved in high-level fundraising for the federal party.

The defence can be expected to focus heavily on federal Liberal Party connections to the accused and key B.C. Liberal government officials, including Christy Clark and former finance minister Gary Collins, who hired David Basi as his ministerial assistant.

And almost forgotten is another upcoming trial -- again of David Basi on allegations that he illegally assisted Victoria developer Jim Duncan and business partner Tony Young in getting land removed from the Agricultural Land Reserve for a housing development in Sooke between 2002 and 2003.

Duncan and Young also face trial in Victoria on charges that they paid Basi $50,000 in connection with building the giant Sunriver Estates project of 650 residential units on 382 acres being built in five phases through 2007.

The outcome of those charges may also raise a host of unseemly issues and unwanted attention for the provincial government.

If and when the actual trial commences, expect it to last for months. This summary of some aspects of the case is merely the proverbial tip of the iceberg for a trial the defence says "millions" of pages of evidence have been disclosed.

And still to be resolved is whether or not the defence will request a change in the trial from judge-only to judge-and-jury, as well as a possible application for a change of venue for the trial -- which could mean it takes place in Victoria rather than Vancouver.

But one thing is clear in the B.C. legislature raid case -- which I have previously described in The Tyee as entering the Twilight Zone -- predicting what will happen next -- let alone the actual outcome -- is completely impossible. Buckle up for another wild ride -- or the most unsatisfying end imaginable to the most captivating show on B.C. politics we've seen in decades.