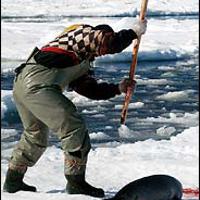 Why Are We Still Hunting Seals?

[Editor's note: Click on the arrows above to view the slide show. Most of the images were provided by Greenpeace, with a few from Rex Weyler's personal collection.]

Why Are We Still Hunting Seals?

Greenpeace is one of the memorable gifts that Vancouver has given to the world.

When I arrived in Vancouver, British Columbia as a wayward war resister from the U.S., I could hardly believe my good luck to meet people who actually called themselves "ecologists." It's hard to imagine now, but in the early 1970s, ecology was not a common word. Most college students would not have been able to provide a decent definition.

Ben Metcalf placed billboard ads around Vancouver proclaiming: "Ecology: Look it up. You're involved!" Most people had to look it up. Bob Hunter published the new ecology symbol -- designed by Ron Cobb in the LA Free Press -- in his Vancouver Sun column and declared that it would be as important as the peace symbol.

Irving and Dorothy Stowe, with Jim and Marie Bohlen -- also expatriate Americans -- had launched a citizens' organization to stop U.S. nuclear weapons tests in Alaska. Irving wrote columns in the Georgia Straight about whales and trees. In 1971 this appeared radical. One night at a meeting at the Unitarian Church on Oak Street, when Irving Stowe held up two fingers and said "Peace," Canadian ecologist Bill Darnell said "Make it a green peace," and the fledgling group had its new name.

One quality that made Greenpeace work well -- besides a cool name -- was the fact that many early members were journalists. Ben and Dorothy Metcalf were seasoned reporters, who had toured Europe after World War II, filing news stories for Reuters. By 1970, Ben Metcalfe had a nature show on CBC television, "Klahanie," which he used to discuss ecological issues. His show broke new ground as one of the first "outdoors" shows that wasn't about hunting. During the first Greenpeace campaign, Ben kept radio contact with Dorothy, who had set up a radio room in their home in West Vancouver and relayed Ben's transmissions to the world media.

Some of us were Marshall McLuhan fans and we took him seriously, believing that electronic images could change mass consciousness. Following McLuhan's ideas, we decided to perform crazy stunts to create the images that would inspire an ecology movement. We did not set out to make Greenpeace famous, but to make ecology famous. As a young journalist and photographer at the North Shore News, I used to meet with Hunter and Metcalfe at the press club on Granville Street across from the old Vancouver Sun and Province offices. There, over beer, Metcalf spun history lessons about how society changed, and Hunter first told me his "mind bomb" theory based on McLuhan's media ideas.

"McLuhan said get out of the ivory tower and into the control tower," Hunter declared, "so let's do it." The "control tower" of course was the electronic media news room, which in those days meant television. We set out to create images that would make people think about and care about nature.

Paul Spong proposed a whale campaign after studying Skana, the first captive orca at the Vancouver Aquarium, and after learning from author Farley Mowat that the whales were being slaughtered to extinction. We wanted to save the whales for their own sake, but we also believed they provided the perfect image to represent wild nature. Whales were magnificent animals with huge brains; they used language and song and they lived in complex societies. For us the whales represented an alien intelligence right here on Earth, a way for the average person to appreciate the magnificence of nature.

On April 27, 1975, we set sail from Jericho Beach on the Greenpeace vessel, the little halibut boat, Phyllis Cormack, with 12 crew members and Captain John Cormack. Two months later we caught up with the Russian whaling fleet off the coast of California. The images from that encounter travelled around the world and fulfilled our expectations of kindling an ecology movement. Whales became famous, Greenpeace became famous, and we soon found ourselves overwhelmed with the intrigues of international politics.

Greenpeace offices began popping up all over the world -- Australia, New Zealand, Paris, London, San Francisco -- and before we knew it, we had an international organization to manage. Representatives from the national offices first met in Vancouver in 1977. Two years later we met in Amsterdam to form an international Greenpeace council. Our little band from Vancouver faced the prospect of giving Greenpeace away to this international council. Hunter later recalled, "Only in Canada would that happen. Had Greenpeace started anywhere else -- in the U.S. or Germany -- it would still be there. We gave it away, a typical Canadian thing."

Irving Stowe passed away in 1974, Ben Metcalfe in 2003, Bob Hunter in 2005, and Jim Bohlen and Dorothy Stowe in 2010. The legacy they left is not just Greenpeace, but a global awakening about our duty to care for the natural world. Hunter commented shortly before his death, "You can go into any bar in Vancouver and meet a founder of Greenpeace," and this is close to the truth. Between 1970 and 1979, thousands of citizens in Vancouver contributed to the creation of Greenpeace. The organization and the movement it inspired remains a legacy of Vancouver and its people.

Tomorrow: An interview with Greenpeace International Executive Director Kumi Naidoo, conducting when he visited The Tyee's offices earlier this week.