Living off the Grid in British Columbia 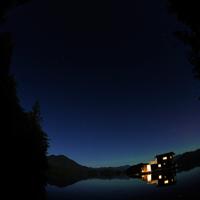 Living off the Grid in British Columbia

I have never braved the road to Bamfield, and a visit with these two unique homesteaders seems like the perfect opportunity to pin another flag on our country’s off-grid map. Already 30 kilometres west of Port Alberni and past the last Tim Hortons -- that fact itself a respectable sign of remoteness in Canada -- I come to the realization that the road to Bamfield is probably the main reason why this oddly spelled coastal outpost is not another Tofino. The 80 kilometre slog through active logging roads isn't something anyone should attempt without a good deal of bodily tolerance for constant vibrations, or an all-wheel-drive with high clearance and serviceable suspension. "The road's at its best right now," a local had advised me a few days before the adventure. I guess. I suppose thick banks of dust and flying rocks make it easier to navigate than wintery mud and wind-crushed trees.

Thankfully, the torture-by-shaking eventually ends and gives way to a more pleasing form of mobility. Much of Bamfield -- Bamfield West, to be precise -- is separated from the rest of Vancouver Island by the Bamfield Inlet. Only boats can take you across this very unique Main Street. Many homes situated elsewhere in the area -- from Grappler Inlet to Barkley Sound -- are also off the road grid. For a student of unusual infrastructures such as myself, this is simply paradise. And being so close to British Columbia's most spectacular sandy beach -- little-known Brady's Beach -- soon makes the unpaved odyssey seem worthwhile.

The assignment begins bright and early on the eve of Labour Day. A warm, bright sun is out and a mother bear and her scruffy little cub are my only companions on the low tide shore. I have unwittingly chosen slack hour to make my way to East Bamfield, which is great news for my lemon of a kayak and my sore back. But upon reaching the shore it'll take me another long trek up an overgrown trail -- after an all-too-short drive on beloved pavement -- before I can shake hands with Jan and Nelson.

Canadian off-gridders come in many varieties. There are those who pinch no pennies to recreate the comforts and conveniences of a typical suburban home. There are the minimalists, who shop for their every necessity off the Lehman's non-electric catalogue. And then there are a few hardcore types who simply make do with salvaged goods from second-hand stores and a wealth of creativity.

Jan and Nelson are members of the latter group. While temporarily rooted in a home erected around their repurposed camper, they're not compromising on their dream sustainable home, which continues to grow into its final shape day by day, nut by bolt, by way of sheer muscular force and ecological imagination. But none of this is what makes them one of a kind.

Being at least 80 kilometre away from the nearest shopping centre might qualify as a near record. But they don't mind. "No big deal," they say, "sometimes we make it seven weeks without needing to go to Duncan." Note: it is Duncan they hit, not Port Alberni. That's an extra 25 kilometre of bumps and ruts.

Oh, and while they're at it they make shopping day their garbage day as well. But often times, after seven weeks of collecting waste in their one, small recycled grocery bag, "the bag is not even full," they remark with pride. And given their knack for reducing, re-using, recycling, and re-inventing, it’s really no wonder.

Much of the material used to build their new home comes from a Parksville demolition and thrift store. The most remarkable and downright stylishly ecological element is the denim they have used for insulating walls. Borax-treated shredded denim batts -- as it turns out -- are ant-, mold-, termite-, rodent-, and fire-resistant. But the recycling doesn't end there. Swearing by the value of Joseph Jenkins' Humanure Handbook, Jan and Nelson compost kitchen and garden waste and use a toilet bucket system to carefully reintegrate into the cycle of life everything they collect in their outhouse. 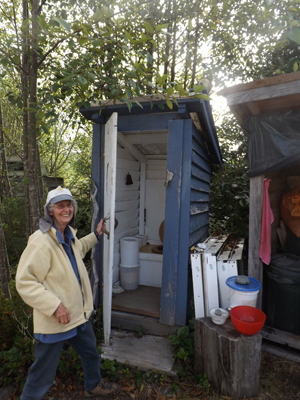 Jan shows off her off-grid outhouse. Photo by Phillip Vannini.

After meeting with some 150 off-gridders in half of Canada, not much surprises me anymore. But Jan and Nelson's unheated bedroom is a first even for me. Or, to be precise, their two unheated bedrooms; Nelson has a reputation for snoring and Jan won't sacrifice on the blissful quiet their neck in the woods is endowed with. The cool temperatures are, once again, no big deal. "A hot water bag is all you need," Jan explains, "once your feet are warm the rest of your body is warm." Now, willingly-unheated bedrooms are unheard of in Canada, but this is not what brought me out here either.

Their electric system, on the other hand, is a prototypical B.C.-style hybrid: solar (a small 700 watt system) and micro hydro. Whereas most of Canadian off-gridders combine solar and wind, West Coast off-gridders know to take advantage of the copious rainfalls, the paucity of freezing temperatures, and the ever-present backyard inclines by installing these ingenious forms of electricity generation. They are virtually maintenance-free and if done up properly they destabilize no ecosystems.

Micro-hydro systems -- let it be clear -- are no child's game. In their case an actual homemade little dam serves to channel water down to a pelton waterwheel that refuels their batteries during fall, winter, and spring. That kind of reliable power is a blessing when you live in a place where the sun doesn't shine much. Bamfield receives an annual wallop of rain that is on average three times larger than the dose Vancouver gets.

The sun also fuels their solar hot water collector. "But in between November and late January we heat water with our propane stove and need to switch to sponge baths," Jan confides. Year-round bathing comfort will improve when the new house will finally be ready -- thanks to back-up propane water-heating.

Living off-grid is an exercise in patience, resolve, resilience, and creative problem-solving, regardless of skills, motives, and place of residence. While most off-gridders manage to somehow re-engineer most of the domestic comfort and convenience typical of life in a modern consumer society, this comes at an inevitable cost: a great deal of everyday chores. There is wood to chop, technologies to maintain, repairs to make, and in most cases even food to grow. Living off the grid is definitely not for everybody, or at least not for those without the cited virtues and abilities.

Jan and Nelson have got it in them, though, and are pulling it off on their own except for the occasional help from "wwoofers" called upon to assist with the upkeep of their mouth-watering veggie garden and with some house-building tasks. These worldly organic farm workers provide occasional company too, but Jan and Nelson otherwise fully enjoy the peace and quiet of each other's company and manage perfectly well without a television or computer. After all they are busy enough with growing a quarter of their food intake right off their land.

But what make them truly special are their birthdays.

Most off-gridders are in their middle age, when a life turn, twist of fate, or misgiving about the globe's direction has led them down a path of solar-powered enlightenment. Some are a bit older -- perhaps having just made come true a dream of living at the cottage year-round. But at their mature age Jan and Nelson are in a category of their own.

Just right around the time in one's life when one might want to settle in a warm and comfy apartment near a health centre, children and grand-kids, or a bridge club, Jan and Nelson have opted instead to mess with batteries, DC inverters, bears as neighbors, and a blood-churning outing to the nearest grocer.

"But at your age, I mean, what would happen if...?" I dare to adumbrate the possibility of a mishap...

"I had a heart attack a while ago," answers Nelson on the spot. "It took me more time to convince myself to go see the nurse than it took her to have me helicoptered to Victoria. I was all fixed by lunch time."

As our conversation about the values of living with renewable energy and the pleasures of a life filled with star-studded nights swirls around the kitchen table, I eagerly wait for my chance to ask, as politely as I can, the question that has been on my mind. At last I find the nerve and seize the moment.

They both laugh out loud. They tell me they've been asked that question before, by friends and family. They moved up here six years ago, having to convince everyone that living far away from even the mildest form of air pollution was the solution to Jan's compromised lungs -- not a puffer and a handy ER around the corner.

And they answer that question the same way every time, to everyone who asks.

"We all have to go one day. One way or another. And we'd rather go on our terms," Jan teaches me with a wise smile, "while still living a beautiful life."