There aren’t many reasons to feel good about fashion these days. Our thirst for new clothes is drying up the planet and causing catastrophic wastage, and we need a change in style.

Never fear, fashion folks, because the thrift army is on the march. Veteran secondhand shoppers have always been a core contingent in the fashion trenches, but lately their numbers are swelling.

For those who’ve thrifted their entire lives, this news comes as a mixed bag. The entrance of the masses into hunting grounds previously occupied by the hardcore types has reduced the caches of good stuff. The positive news is that today there are so many places to find great things — clothes, shoes and the occasional bit of serious bling to lighten up these dark times.

One of the most consistently solid places of these in Vancouver is My Sister’s Closet. Their two locations on Commercial Drive and Seymour Street offer carefully curated selections of secondhand clothing, shoes and accessories, and have just been joined by a third pop-up location on Main Street.

The Main Street pop-up, which opened last week in Vancouver and runs until Aug. 31, is fuelled in part by a large donation from the film industry, with a bounty of barely used clothing and other items. The opening event was thronged with all kinds of people — fashionista-types, but also just regular Vancouver wieners in their Gore-Tex jackets.

With seed money from Vancity credit union, the non-profit Battered Women’s Support Services opened the Seymour Street location of My Sister’s Closet in 2007. The location in downtown Vancouver was chosen because a sex worker named Elaine Allenbach went missing in the area in 1986.

The store is a social enterprise that supports the work of the non-profit organization. The revenue generated is dedicated to funding programs to help women in need.

Executive director Angela Marie MacDougall, who started in the role in 2003, noted that attitudes towards thrifting have changed over her tenure. My Sister’s Closet recently celebrated its 20th anniversary and things are looking good — both in a fashionable sense and in the profitable one.

The business model is pretty straightforward — the sale of donated clothing generates money to help support Battered Women’s Support Services programs. It helps that the folks donating clothing and other items are generous in sharing their pre-loved fashions.

Brands like Eileen Fisher, J. Crew and Talbots, as well as accessories and jewelry from local craftspeople are abundant. One the best things about the selection at My Sister’s Closet is the variety of stuff on offer — everything from designer fashions to the $5 sales rack. I’ve found items by iconic Italian knitwear company Missoni, and Japanese avant-garde designer Issey Miyake.

During the first waves of the pandemic, both brick-and-mortar locations were closed, but the organization pivoted to online shopping, which proved a runaway success. MacDougall says it took some tinkering to get it right, but she has nothing but praise for the digital team.

“The online store has been so fun, but quite the undertaking. You need really good photos,” she said. “Everything has to be measured to ensure how it fits. The e-commerce team has been incredible, they’re so solid. It carried us. It continues to be really great.”

The store’s Instagram account is also a thing of joy, with volunteer staff members modelling outfits from donated items.

Something I’ve noticed as a long-time patron of the Commercial Drive store is the ambience of the place. Namely, a distinct lack of fashion snobbery. Communal, chatty, with patrons popping in and out of dressing rooms and other folks weighing in on whether it works or not. It doesn’t feel like a department store or the mall: it feels human, silly and fun, which is really what fashion should do.

The success of My Sister’s Closet is indicative of a larger shift. With excess consumption being implicated in all kinds of human misery, the idea that shopping could be redirected towards doing some good is a positive development. 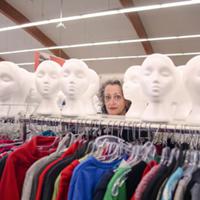 Even fashion media is taking note. The Guardian’s style section has eschewed articles about new things to buy and begun offering articles on repairing, renting and thrifting clothes.

The supreme joy that comes from finding something that you love that was previously loved by someone else is based on a curious relationship and an invisible connection with a story that one can only wonder about. More than once, I’ve wondered how a particular item of clothing ended up where it is.

What mysterious journey brought you, lovely bit of fabric and stitches, to this sales rack? I like the idea of making up narratives for clothes, perilous adventures that always have a happy ending. “Don’t worry anymore little long-lost jacket,” I say, “You’re coming home with me now.”

People will always want and need clothes. Buying things secondhand is an easy way to shop locally, have fun, participate in the circular economy and help a good cause. It’s all good, babe.