The idea, launched in the U.K. by Oxfam, asks people to abstain from buying any new clothes for the entire month of September.

Many of these campaigns are good for the planet, good for your colon (less red meat), and easier on your liver, but unless there is joy, they don’t tend to stick around. That’s why Second Hand September might stand a chance — because thrift shopping is fun. There’s nothing quite like the righteous thrill of finding some glorious thing, a unicorn hiding amongst the dross, for dirt cheap. It feels almost criminal.

With these notions in mind, my colleague Chris Cheung and I set out to go a’thrifting, visiting our favourite Value Village locations in Richmond and Vancouver. Like panning for gold, if you have a lucky strike you tend to revisit the same spots again and again, in hopes of recapturing that certain gleam. It happens more often than you think.

A few weeks ago, I was cruising the racks of the Village on Victoria at 48th Avenue. The act of searching brings on, in me at least, an almost fugue-like state. The world narrows to the stuff in front of me and ancient instincts, forged on the primeval veldt, come springing to life. Then, just when I’m about to give up and hang up my little red shopping cart, there it is. A thing of beauty and grace, design and construction, everything functioning in perfect harmony, singing from the rack. “Look at me!” it trills. “Ain’t I glorious?”

This happened at Value Village recently when, after a long slog in the aisles with little to show for it, I parted the hangers and found an Issey Miyake pleated skirt for the grand price of $4. She was a beaut! A subtle creature of palest mauve, with knife-pleats that moved in a rainbow swish of colour. It was almost magical. For fashion noobs, Issey Miyake is a Japanese designer who made his reputation on pleats. In Holt Renfrew or Nordstrom, his clothes can cost upwards of $2,500.

Getting something that expensive for close to nothing is sweet, but there’s something else at work. These clothes have stories. How did this skirt come to be here? What was its provenance? What twists and turns of fate brought this bit of fabric and thread to my greedy little hands?

Sometimes things in pockets tell a story. Inside one pocket of a Barbour quilted coat I bought recently was an unopened package of tissues and a bunch of clipped coupons for the Capilano Suspension Bridge. What happened to the lady who once owned this coat? One will never know, of course, but there’s something about clothes that have lived a life before they met you that is interesting. 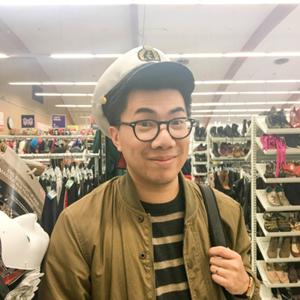 Chris at the Village. Did an actual captain ever wear this?

“Look at this,” Chris says as he pulls out an assortment of local, lived-in tees: shirts from marathons, Eric Hamber high school’s sound crew, Kevin’s Bachelor Party 2012, and various Christian retreats, including one that overlays a Bible verse onto a graphic that looks like a rip-off of the cover of Joy Division’s Unknown Pleasures. “The whole neighbourhood is here!”

In our first foray, Chris unearths brands like True Religion and A Bathing Ape, brands that recently clothed the high school alphas. Perhaps at the insistence of Vancouver’s fastidious moms, the closets of prom kings over the years have been plundered and now clothe the Village people. Chris tries on a pair of coveted Bape Japanese denim. “They don’t fit!” he cries.

Ah, nuts. Back to digging.

Thrifting isn’t all sunshine and sparkles, as any grizzled prospector will tell you. Rare finds require an investment of time and work, digging and panning through a lot of castoff junk, most of it from fast fashion retailers like Forever 21, Joe Fresh and H&M. There’s also a lot of fool’s gold, fake designer gear pretending to be status brands like Burberry, Gucci, Kenzo and Prada. Most fakes are pretty easy to spot. If it seems too good to be true, it generally is.

More obscure designers tend to slip under the wire of the Value Village price-setters. Hence discoveries from designers like Rick Owens, Thom Browne, Rei Kawakubo, Dries Van Noten and Miyake. Streetwear also tends to escape notice, as it’s constantly morphing from one hot brand to the next.

Last year, at the same Value Village on Victoria, a particular pattern caught my eye. It was a hoodie from A Bathing Ape, in a camouflage print with a hood that zipped up all the way to form a fearsome shark face. I called my son Louis and asked him if he wanted it, even though it was a size small. “Get it!” he barked over the phone. So, I did, paying $6, less my 30 per cent discount.

After a vigorous authentication process that involved intense phone calls with his friends and some perusal of the Interwebs, it was decreed genuine, and also a rare release from a store in Japan. He flipped it, reselling the hoodie for close to $500, a profit percentage that would make even the Vancouver housing market proud.

My point is, there’s gold in them hills. But you’ll have to dig for it, and there are plenty of other folks out there, hoping to hit pay dirt.

One of Louis’s friends made thrifting into an actual job, trolling all of the second-hand stores and reselling designer wares for significantly more money. Louis showed me a vintage Chanel blouse that his buddy had on offer for serious coin.

“Where did he find that?” I asked.

Thrift for the younger folks is a slightly different experience. It’s not all about clothes; there’s also other things — housewares, fabric and lots of insane kitsch.

Chris sniffs around the Village graveyard, where crappy capitalist cravings that lived fast and died young are buried. Rest in peace, LaserDisc. Good riddance, Beanie Babies, who promised their weight in gold but failed to deliver. But how about a dozen copies of Twilight or the even more terrible sequel New Moon? Do you really need to reread The Secret or The Da Vinci Code?

In home appliances, Chris finds gifts of Christmases past: a fleet of shiny breadmakers and flash-in-the-pan novelties like Slap Chops™ and Yonanas™ machines.

One of the more unusual artefacts is a s’mores maker, with an image on the box that resembles a scene from a ’90s sitcom — young professionals dressed in normcore enjoying the traditional outdoor treat in a bland suburban kitchen. “This should be destroyed,” says Chris. We think about lighting it on fire but decide against it.

There are more useful things. In the kitchenware section, sturdier goodies like Dutch ovens abound. Thanks to the Village, people who are shut out of cookware cults like that of Le Creuset can feel included at one-seventh of the budget.

After 30 years of thrifting I’ve collected stories, along with heaps of clothing. Like the time a friend of a friend, while trying on a jacket, found a roll of cash, some $3,000 in the pocket. Needless to say, he bought the jacket.

Chris and I didn’t find rolls of cash or any vintage Chanel (probably the holy grail of thrift), but we did find some solid items, a mix of designer wear like Max Mara, Rag and Bone, Eileen Fisher, Theory, as well as some fake Burberry and Prada, along with a few quality basics.

There are other benefits to the thrift: you’re recycling, prolonging the life of things that might otherwise have ended up in a landfill, helping out the sad old planet in a couple of different ways. There’s also the thrill of sticking it to the system, man... every time I see a piece of Lululemon attire I think, “Suck it, Chip Wilson.”

But the thing that makes thrift shopping truly fun is sharing.

Not only finding stuff for yourself but for the people that you love. Finnish design Marimekko for my sister, vintage YSL (Yves Saint Laurent) for Louis, and other curiosities like naked mermaids from the 1950s and early ’60s for people with an interest in aquatic erotica. If you find some kooky thing and there’s no one there to show it to, it isn’t as much fun.

Things have changed a little since I started going to the Village in the mid-'80s. Back then, $20 could get you two huge bags wadded full of stuff. Primo vintage finds like delicate lace blouses from the ’40s, 1950s gasoline station jackets and Lily Pulitzer shift dresses were still relatively plentiful.

It’s different now, and occasionally you feel like a crotchety old ’49er talking about the good old days when every stream was flush with nuggets. If you ask any life-long thrifter to name their greatest finds, be prepared to spend some time listening to yarns akin to fishing stories.

But mostly it’s not the stuff you find so much as the things that happened while you were searching: the silly conversations, the dumb jokes, or going for dumplings and bubble tea afterwards. Thrifting, sometimes, as the old saying goes, can take a Village.