I know this is not fair, but when l think of Veninger I remember an ancient CBC program called Airwaves, that aired for two seasons . Veninger played Zoe, the teenage daughter of the show’s star Roberta Maxwell. Airwaves was something of a painful pleasure, it was one of the only shows on CBC that featured a teenage girl, but at the same time, it made my entire family howl with laughter at the stilted awkward stories and corny Canadiana.

Ingrid Veninger is now a fully grown woman, with six feature films under her belt, but some of this early teen stuff sticks to her new film, Porcupine Lake, like a melted popsicle.

Porcupine Lake tells the story of two teenage girls, who meet over the course of one summer in northern Ontario. Things kick off on the long drive from Toronto to Port Severn with a woman and her teenage daughter on their way to visit their estranged father/husband. The family has inherited a run-down gas and snack bar in town, and it’s unclear whether this will save the couple’s foundering marriage, or be the final nail hammered flat.

Initially, things are not looking good.

Mom (Delphine Roussel) chain smokes cigarettes and paces like a caged lioness, while Dad (Christopher Bolton) sips from a flask in the back of the family diner.

Their daughter Bea (Charlotte Salinsbury) is a waifish creature prone to fainting spells and staring blankly into space. Despite heralding from the big city of Toronto, she is unworldly in the extreme. The girl has never heard the word “boner” and claims to know nothing about French kissing. Luckily enough, or perhaps not, Bea soon develops an intense friendship with a local girl named Kate (Lucinda Armstrong Hall).

Kate is immediately recognizable as one of those hard-nosed kids from the bad side of town, complete with halter-top and shorty-shorts. Precocious, tough-talking, and bossy in extreme, she is an authoritative source on all things boner-related. She pronounces Bea her best friend, declares she thinks she’s adopted, and determines that she should move back to Toronto with Bea and her family — all of this virtually in one breath.

As an adult, every instinct you have will flash red, with whooping warning bells that scream “Trouble!” A quality that is compounded as Kate introduces Bea to her family including her violent older brother Romeo, who suffers from a head injury and a frightening lack of impulse control. Our first glimpse of Romeo features him virtually assaulting his girlfriend when she denies him sex. “Cock tease!” he spits out, a sentiment that Kate echoes, as she and Bea spy on the action from a distance.

Sex is in the air, not only between the two principal characters, but sliding in sideways in other scenes. As Bea’s parents struggle to rebuild their marriage with afternoon trysts, Kate and Bea wander through the pellucid landscape, dewy with the newness of summer. Kate is only too eager to indoctrinate Bea into the age of experience, demanding that her little brother pull down his pants, and show the girls his “wee-wee,” and sticking out her tongue for a little Frenching action with her new best friend.

But, here is where things go a bit awry. The film trades in rather thin characterizations, especially with Kate’s family. Whether they’re playing strip poker or torturing dogs in the woods, they are depicted as your prototypical trailer park bunch, poor, chaotic and kinda trashy. They like ATVs, drinking soda pop from unmarked bottles, and plastic above-ground swimming pools rotting away in the backyard. In contrast, Bea’s parents, in spite of their miserable marriage, appear to be trying to keep it together for the sake of their kid.

Over the course of the summer, as events pick up speed, heartbreak, and perhaps something even worse, appears to be on its way.

Porcupine Lake owes something to other better films such as Heavenly Creatures, in which teenage girls indulge in same sex attraction and kill people, or even last year’s Sleeping Giant, that bears some of the same cinematic DNA, albeit from a teenage boy’s perspective.

But in spite of the hoariness of the coming-of-age genre, Veninger manages to inject some new life into the proceedings. The performances from the two young leads are particularly strong, and they are amply supported by the older actors in the film. The film is beautifully shot, easy in its pace and construction, and filled with idiosyncratic details, like a birthday party for two 50-something women that devolves into a drunken disaster. These interstitial bits are actually some of the most charming parts of the story, sidling in from the edges, adding warmth and texture. Porcupine Lake is much more a film about atmosphere, than narrative, and on this basis, it succeeds.

But despite its gentle flow, there are some unsettling aspects to the story, including a semi-incestuous undercurrent that pops up in the way that Kate talks about older brother, and sudden, abrupt plot turns that feel imposed and often artificial. Even as the two girls are exploring the contours of their new friendship, the weirdness of adult life moves in and around them, adding an element of uncertainty and even danger. Bea’s touchy relationship with her mother and her budding sexuality are hinted at, but just barely.

There are some other problems as well. The dialogue sounds like it was written by an adult trying to imitate how teenagers talk. The current crop of teens is a pretty sophisticated bunch, well-versed in boners and beyond. Any teenager I know would greet the conversations in the film with the most epic eye-roll possible. Additionally, it is bit hard to tell when Porcupine Lake is taking place, really it could any period from the late ‘80s through to today. The film tries to interject some last minute drama, but in good Canadian fashion everything resolves with little lasting pain.

Although the story of Bea and Kate is ostensibly at the heart of things, the real star of Porcupine Lake is summer itself. And, even more precisely, memories of summer. Balmy nights and long dreamy afternoons suffuse the action. When the film is bounding around, pink and puppyish with new feelings and sensations, it succeeds in infiltrating your defences. But maybe that is simply summer at work.

Summer and childhood go together. If I could pick any period in my life that I could return to and live inside, it would be the summer I turned 10. The prickly uncertainty of puberty was a way off, and my body, skinny and tanned by summer’s end, was still fully my own. Sleepovers, the beach, and an ongoing love/hate war with a group of boys from town took up all my thought and energy. Getting up at 5 a.m. to sneak into the neighbour’s garden and steal all their carrots, or walking along the highway at night in our baby doll PJs, pretending we were hypnotised, was about as exciting as things got, but that was actually plenty exciting.

There is something of that precipitous feeling in Porcupine Lake, especially in its depiction of the strange things that young girls get up to, whispering secrets to trees and practising kissing on the back of your own hand.

The temptation to live in the past, to build a house there, is almost unbearably tempting on occasion and Porcupine Lake, with its swath of summer sky and endless meadows, heavy with nodding wild flowers, brings it back with surprising power. Even the bits of minor drama, a nasty brother, oblivious parents, and the pangs of early passion, fade away into the gloaming of a long summer evening, and the glories of loping through the woods with long-limbed ease.

And on that note, if you would like to see the ultimate summer memory film, you are in luck. Wild Strawberries opened the Bergman retrospective at the Cinematheque on March 8. But you have plenty of time to see the Swedish auteur in his all his glory, as the retrospective runs until next December.

Wild Strawberries is an excellent way to begin, embodying all of the director’s major themes, but suffused with a sweetness of spirit, and gentled with remarkable performances. It settles into your body, and remains there, a corner of warmth and slowing fading sunshine. In describing the origin of the film in his book Images: My Life in Film, the director spoke about it as a means of re-entering childhood and contending with his parents, but later added, “The truth is that I am forever living in my childhood.” 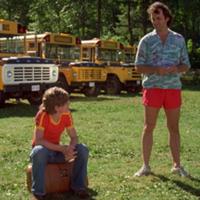 ‘Meatballs’ and the Films of Summer’s Ending

Maybe we all remain children in some secret corner of our hearts.

In this Wild Strawberries is an interesting counterpoint to Porcupine Lake. Even, if the latter film is still little more than a wisp, it retains some of that same bittersweet quality of Bergman’s masterpiece. All of those summer time feelies are there, and at some point, you wish you could simply step into the screen, and relive it all over again.

The long summer evenings, heavy with the smell of warm dust. The slickness of a first French kiss. The feeling of lake water and the drip of ice-cream on a hot day. Or the way cool air collects off the ground and winds its way up your calves to kiss the edge of your still-damp bathing suit.