Many of us spend so much time trying to stop bad things from happening that we rarely take the time to sketch out how things could be better, let alone actually go out and create a little slice of the future we want to live in. Prefigurative interventions seek to address that imbalance. 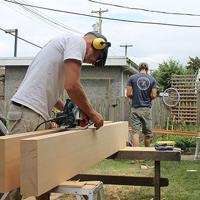 The lunch counter sit-ins of the U.S. civil rights movement are frequently referenced as defiant, courageous and ultimately successful acts of resistance against America's Jim Crow-era apartheid. They were certainly that, but they were also profoundly prefigurative.

The students' actions -- mixed-race groups of people violating the law by sitting at lunch counters and demanding to be served -- foreshadowed victory and prefigured the world they wanted to live in: they were enacting the integration they wanted.

Pranks, art interventions, tactical media, alternative festivals and temporary communities, even electoral guerrilla theater, can also be effective ways to prefigure the world we want to live in.

Prefigurative interventions are direct actions sited at the point of assumption -- where beliefs are made and unmade, and the limits of the possible can be stretched. The goal of a prefigurative intervention is twofold: to offer a compelling glimpse of a possible and better future, and also -- slyly or baldly -- to point up the poverty of imagination of the world we actually do live in.

Like the occupation of Tahrir Square in Egypt and the encampments in public squares across Spain by the Indignados movement, the Occupy encampments across the world are crucibles of prefigurative intervention, providing a space for people to create in microcosm the communitarian and democratic world they want to bring into being. Likewise, the Burning Man art festival works as a temporary autonomous zone where people can live out values, test out ideas and experiment with the future in real time. 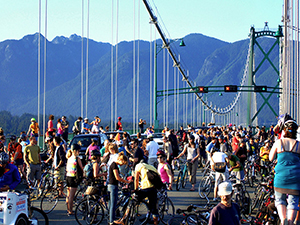 Vancouver's 'Critical Mass' bike ride is an example of prefigurative intervention. Photo by David Nidderie via Your BC: The Tyee's Photo Pool.

Monthly Critical Mass bike rides prefigure future cities in which bicycles actually hold their own as traffic. Or Park(ing) Day, in which people in cities across the country put a day's worth of coins into a parking meter and transform their parking space into a mini-park or jazz lounge or tiny public swimming pool, prefigure a greening of urban space and a reclaimed commons.

The Oil Enforcement Agency was a 2006 theatrical action campaign in which environmental activists -- complete with SWAT-team-like caps and badges, posed as agents of a government agency -- one that didn't exist, but should have. Agents ticketed SUVs, impounded fuel-inefficient vehicles at auto shows and generally modelled a future in which government took climate change seriously.

If hope truly is a muscle that we build by exercising, then interventions that prefigure the world we want to live in -- whether by prophetic acts of civil disobedience, the formation of alternative communities or the staging of prankish provocations -- are one of the best ways to work that muscle.

What is it? A vision of a better world, acted out in real life.

Common uses: to give a glimpse of the utopia we're working for; to show how the world could be; to make such a world feel not just possible, but irresistible.

Key principle: Show, don't tell. You can go on about the better world you dream of until you're blue in the face, and it might not sink in. You might not even believe it. But creating a lived experience of the change you seek -- whether it's a prophetic headline that for 15 seconds you believe to be true, or an unlocked white bicycle leaning against a building that is free for anyone to use -- is the best way to break through cynicism, stimulate our political imaginations and affirm that, "Yes, another world is possible." After all, we can't create a world we haven't yet imagined. Better if we've already tasted it.

Potential pitfalls: When playing with utopian visions, it's easy to get all squishy-Kumbaya or run off into esoteric fantasyland. The idea is not to paint a pretty picture full of rainbows and unicorns, but to put forward a fragment of something visionary, desirable and just beyond the realm of the possible -- and in such a way that your action calls out the vested interests making it impossible. In sum, it has got to make sense. Don't go proposing replacing a cash-and-credit economy with a hug-and-kiss economy and think that'll demonstrate how the CEOs are keeping us all from being happy.