''Artists use lies to tell the truth. Yes, I created a lie. But because you believed it, you found something true about yourself.'' -- Alan Moore 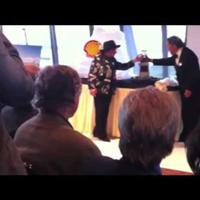 Behind the #ShellFail Video Hoax

When trying to understand how a machine works, it helps to expose its guts. The same can be said of powerful people or corporations who enrich themselves at the expense of everyone else. By catching powerful entities off-guard -- say, by speaking on their behalf about wonderful things they should do (but in reality won't) -- you can momentarily expose them to public scrutiny. In this way, everyone gets to see how they work and can figure out how better to oppose them.

This is identity correction: exposing an entity's inner workings to public scrutiny. To practise it, find a target -- some entity running amok -- and think of something true they could say but never would -- something that's also lots of fun.

What you say can either be something your target would say if its PR department went absent or berserk (modest proposal), or things they would say if, by some miracle, they decided to do the right thing (honest proposal). Instead of speaking truth to power, as the Quakers suggest, you assume the mask of power to speak a little lie that tells a greater truth.

The modest proposal approach -- which the Yes Men and others have used on many occasions to impersonate companies and parody them -- can be a hit-or-miss affair. It usually involves an absurd and extreme -- but logical -- extension of the entity's current practices, like when the Billionaires for Bush put Social Security up for sale on eBay, or when the Yes Men suggested that CEOs in the West would want to remotely monitor and control workers in factories in Africa via a control panel mounted on a huge golden phallus.

In spite of the emotionally satisfying payoff of antics like those, it's the honest proposal approach -- assuming the identity of a big evildoer and announcing they're doing something wonderful -- that has proven to be the more effective way to embarrass a target.

When the Yes Men impersonated Dow Chemical on the twentieth anniversary of the Bhopal catastrophe and announced on Dow's behalf that it was finally taking responsibility for the disaster, or when activists impersonating French officials announced that Haiti's debt -- imposed when Haiti won independence from France, to compensate French slave owners for their lost ''property'' -- would at long last be forgiven; or when environmental activists impersonated Canada (in one case) or the U.S. Chamber of Commerce (in another) and announced surprising and wonderful things…

In all these cases, the consequences were immediate: voluminous news reports about the unlikely turn of events (and, in the Dow and General Electric cases, giant temporary drops in each company's stock value). These, in turn, provided fodder for a wave of other articles about the whole hoax, providing a media platform for the reform programs of campaigners working on these issues.

What is it? Assuming the role of a corporate spokesperson and announcing something truthful or bizarre.

Common uses: To embarrass your target; to correct the public record; to expose corporate malfeasance; to reframe an issue.

Key principle: The real action is your target's reaction. Often the most revealing moment in a successful identity correction is the reaction of the target. When you identity-correct a major corporation, you force them to react. They can't let the lie that tells the truth stand in the media. General Electric had to tell the press it was not returning its questionable tax refund to stand in solidarity with struggling Americans. Dow Chemical had to issue a statement indicating it had not apologized for the Bhopal disaster and would not be compensating the victims.

Potential pitfalls: Getting caught by the real folks you are impersonating. Not really a pitfall, just a plot twist.

Adapted from Beautiful Trouble with permission. To learn more about the project, go here.