Today we're comfortable with China. Communists in name only, its rulers pump consumer goods into our malls and lend Washington the money to run its wars. It seems to have at least a little influence over its lunatic client North Korea, and Canadians rejoiced when we became an acceptable destination for Chinese tourists. 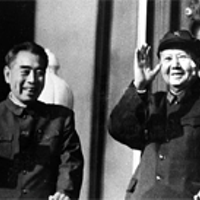 Fifty years ago, however, what little we knew about "Red China" was disturbing. The Communists had been in power since 1949. They'd fought the West to a standstill in Korea, and they seemed to be more Stalinist than the late Stalin himself. Only the reddest of western fellow-travellers got even a glimpse of life behind the Bamboo Curtain.

We did know that in 1958 Mao Zedong had launched the "Great Leap Forward," an attempt to industrialize a huge and backward nation of peasants. But we had no reliable information on how it was working out, as I learned when I wrote an undergraduate essay about it in 1960. All we knew was what appeared in the English-language version of Renmin Ribao, the official newspaper. And it was clearly lying.

Plunging into a nightmare

Mao's government kept the rest of the world in the dark, but it kept careful records of what was going on. Some of those records were even accurate. Now the archives have begun to open, and Dikötter has explored them.

Reading Frank Dikötter's book now is a chilling experience. While we enjoyed the golden age of the young baby boomers, Mao was plunging 600 million Chinese into a nightmare of starvation, brutalization, and environmental catastrophe -- to make China more like us.

His specific goal was to match Britain's industrial production within a couple of years. To achieve this, he adopted some crank ideas about improving agricultural production to feed the new urban proletariat. They in turn would build factories cranking out enormous quantities of... something. The peasants, meanwhile, were called in from the fields to run backyard steel mills that recycled their own pots and pans. Every tree in sight would fuel those mills.

While rice rotted in the paddies, local party bosses reported bumper crops. Then they confiscated the "surplus" grain to feed the urban workers, leaving the peasants with nothing. Everyone now belonged to communes that decided who would be fed and who left to starve. Children were beaten to death for digging up a single potato.

Within months, China became a kind of tyrannical anarchy. The government imposed impossible demands on its people, who survived by ignoring them. Racketeers flourished. Food was stolen or contaminated. New industrial machinery, bought from the Soviets and other nations, was neglected into uselessness.

Women were routinely raped, or prostituted themselves, for a handful of rice. Starvation caused many to suffer prolapsed uteruses: their wombs fell out of their vaginas. Parents sold their children for a couple of buns. In many regions, freshly buried corpses were dug up and eaten.

Meanwhile, the Communist elite was either silent or in denial about what it had done. But Liu Shaoqi, the number two man in the Party, visited his home town and was appalled at what he saw. Back in Beijing he publicly protested Mao's Great Leap Forward. That sealed his fate: Mao began to plan the Cultural Revolution that in the late 1960s tore apart the Communist Party itself, and that put Liu in prison where he died.

All told, Dikötter, estimates, the Great Leap Forward cost China somewhere between 30 million and 65 million lives in the space of four years. It depopulated and deforested huge regions, poisoned lakes and rivers, and impoverished the workers and peasants it was supposed to help.

As Adam Smith once observed, "There is a great deal of ruin in a nation," and Mao showed how much ruin he could extract from China. Despite this self-imposed catastrophe, China in 1964 exploded its first nuclear weapon. Two years later, Mao smashed his own party's political infrastructure through the Cultural Revolution, remaining supreme when Nixon and Kissinger came calling in 1972.

'To get rich is glorious'

China began to recover only after Mao's death in 1976 and the brief interregnum of the Gang of Four. Deng Xiaoping, who had supported the Great Leap Forward, became a casualty of the Cultural Revolution but eventually returned to power; he set China on its present course with the slogan: "To get rich is glorious."

China since the late 1970s has truly leaped forward. We've seen 30 years of astounding growth, 10 per cent a year or more. This time the numbers are usually real. China's population has doubled, and hundreds of millions have actually risen out of poverty into ownership of cars and condos.

But no person and no country could have survived the Great Leap Forward unscarred. Top-down communism and top-down capitalism get similar social results. In the pursuit of wealth, as in the pursuit of backyard steel, the same abuses appear: shoddy construction, lethal pollution of air and water, racketeering, exploitation of peasants and workers, contamination of food and consumer goods with everything from melamine to lead.

Whatever goal China's leaders set, the Chinese will achieve even if it kills them. In 2011 as in 1958, the end justifies the means -- and the deaths.