Yep, it's that time again: the season of the spooks. 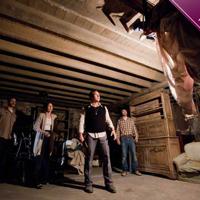 At this time of year you can revisit horror films with a certain level of impunity. It's okay, appropriate even, to watch a few. Think of it as a seasonal perk. They're everywhere at the moment: on television, in the movie theatre, and nestled in dark corners of your mind.

You went to the video store, rented as many movies as you could carry and invited the boys over. The same group of films was on permanent rotation, namely The Texas Chainsaw Massacre, The Thing, Night of the Living Dead, Poltergeist, Halloween, Nightmare on Elm Street, et al. The pantheon of horror greats.

If you were lucky, you got to snuggle with a spotty dude underneath a blanket in someone's parent's living room. Perhaps that is why I remember so many of these films with a layer of Vaseline on the lens of my brain, softened and dewy with time and age. Revisiting them now is like listening to old Prince albums; the ghost of your teenage self surfaces like the spirit of who you once were.

It's okay to spend some time in the past. There is a great deal of comfort to be had there. And if the number of horror remakes today is any indication, a lot of filmmakers must feel the same way.

Carrie is only the latest in a long line of classic horror films to suffer a needless makeover. It's happened to everything from The Thing to Halloween. Much ado has been made about the newest version of Carrie, namely that there isn't much to care about. The song remains the same: buckets of blood, teenage hormones gone trippy wild, and the mad call of girlish revenge. Ahh, memories…

But you can't ever really go home again, no matter how much you spend or how hard you try. Great films are the product of a specific time and place, plus a weird dash of crazy magic. Call it a lightning strike of luck, timing and chemistry that collides on celluloid to make a movie miracle.

Before he made Night of the Living Dead, George A. Romero was a college dropout, directing commercials and industrial films as well as filming the odd gig for Mr. Roger's Neighborhood in grotty old Pittsburgh. (He remembers the short film, Mr. Rogers Gets a Tonsillectomy, as the most frightening thing he ever made.)

Romero describes the early days of his career as a process of learning on the job, cutting and shooting hundreds of hours of film, making beer commercials and detergent ads. This was an age when you sent your film to the lab to be processed and then had to wait for it to be sent back, or not. As Romero hilariously recalls getting phone calls from the lab saying, "You know what… we fucked it up," he bursts out laughing, as does the camera guy and the interviewer.

Birth is filled with these types of candid moments, but there is something else, a genuine excitement that occurs when something new is created. In this instance, it happened in an abandoned farmhouse outside of Pittsburgh when a motley film crew came together to create what Romero calls "the most ballsy horror movie we could make."

If you don't know the plot of Night of the Living Dead, here it is, fast, cheap and out of control. A brother and sister visit a graveyard and are attacked by a creature. The brother is killed, and the sister escapes and takes refuge in a nearby farmhouse. She is joined by a group of other people who board up the house and try to fend off an army of the undead. Everyone gets eaten and/or killed. The end.

Made for the grand sum of $114,000, which is probably about the same amount spent on a catered lunch for a modern film set, the film came about through a haphazard convergence of people and events. As Romero recounts, most of the people in the production were either clients of the ad agency where he worked or local folks eager to lend a severed hand or two. Real police officers participated, as did real television journalists. The rest of the cast was made up of teachers, housewives, and the owner of a local roller-skate rink.

With no money the film was shot guerilla-style, meaning extra cheap. Actors doubled as makeup people, and producers ad-libbed some of the film's most famous lines. A local meatpacker supplied the guts and bones that the zombies gnaw on. You can't make this shit up. The end result of this raw enthusiasm was a Beckett-like mixture of dread and despair that lies over the film like a pong. Night still packs a wallop that stays with you for days, years even.

As Bill Moyers remarked about Kuhn's documentary: "It's taken me 45 years to stop biting my fingernails after first seeing Night of the Living Dead… I finally understand why I was not only scared out of my wits, but was simultaneously watching a cinematic breakthrough and cultural phenomenon."

The documentary interviews a number of folks who talk about their similar experience with Night of the Living Dead. Critic Elvis Mitchell saw the film as 10-year-old boy at the drive-in and remembers it as a moment when everything changed. Even Romero himself recalls the origin of the film as a revolutionary act. "I wanted something that would be an earth-shaking change," he says. "Something that was forever, something that was really at the heart of it."

The miracle of the film's creation continued even after it was delivered to post-production, where the sound mix was the result of one of the crew members winning a bet.

Night of the Living Dead was one of the only films to screen at the MOMA in New York, as well as the infamous grindhouse circuit on 42nd Street at the same time. But the film was also released in the Saturday afternoon horror slot, a place where adults dropped their kids off for matinee screenings, a realm hitherto ruled by toothless old taxidermies like the werewolf, the mummy or Frankenstein's monster. Into this innocent age, Night of the Living Dead came on a horror hurricane.

I can only imagine seeing the film in this context, which is precisely what happened to critic Roger Ebert, who went to a matinee screening of Night in a theatre packed with kids. Ebert remembers seeing small children staggering out, literally obliterated with fear, after having witnessed a little girl eviscerate and eat her own mother with a garden trowel. Ebert later recanted on his initial review and gave the film a somewhat less pillorying critique, but here is part of what he wrote in 1967:

"The kids in the audience were stunned. There was almost complete silence. The movie had stopped being delightfully scary about halfway through, and had become unexpectedly terrifying. There was a little girl across the aisle from me, maybe nine years old, who was sitting very still in her seat and crying… I don't think the younger kids really knew what hit them. They were used to going to movies, sure, and they'd seen I felt real terror in that neighbourhood theatre last Saturday afternoon... I saw kids who had no resources they could draw upon to protect themselves from the dread and fear they felt."

Ahead of its time

One of the other notable things in Ebert's review is how he describes the people in the film, referring throughout to the lead character of Ben as a "negro." The word fell from common use a long time ago, and here it serves as a reminder of the time and climate in which the film was made.

Night was a reaction, not only to the carnage of the Vietnam war, when television images of the conflict were being broadcast into the living rooms of America, but also to the rage and despair that attended the failed idealism of the 1960s. Along with dead soldiers and napalmed children in East Asia, race riots and protests lit the streets of major American cities.

Romero's decision to cast young black actor Duane Jones as the film's lead, Ben, has untold reverberations. As Elvis Mitchell remembers, it was the first time he'd seen a black character who wasn't peripheral to the story. Ben is the only person with a lick of sense, so naturally he is shot to death at the end of the film by a redneck with a gun. Some things never change.

At the time that Night of the Living Dead was made, black characters were still something of a novelty act in mainstream cinema, denuded of power and mostly out to save whitey. The Andy Griffith Show featured a version of the American South entirely stripped of colour, in every sense of the word. A particularly hilarious takedown of the Sidney Poitier/Tony Curtis vehicle The Defiant Ones is offered up by editor Sam Pollard, who simply shakes his head at the film's final scene in which Poitier cradles Curtis in his lap and croons a good-old fashioned negro spiritual.

In contrast to this, the character of Ben was remarkably ahead of its time, preceding later black heroes like Shaft. As film historian Mark Harris notes, people were drawn to the Night of the Living Dead precisely because they weren't ready for it.

Watching Kuhn's documentary, I am reminded of those moments when you see something that you haven't seen before and everything changes, like hearing Dylan in the radio or seeing your first zombie. This is not to overstate the case for Romero's film as much to say that we're due for a change. Our culture feels exhausted, worn and thin, ready for some new thing to be born. Every time I look at the listings of movies playing in the theatre, I think, "I'm bored..."

Sometimes it is the little and most unlikely of things that change everything. No one could have predicted that some tiny film made by a first-time filmmaker in Pittsburgh would spawn a global phenomenon. All it takes is one little push and down topples an empire.

I keep thinking it will happen any day now, or wishing that it would. Maybe it will be Russell Brand fomenting revolution on the BBC. Stranger things have happened. A seismic crack in the culture will appear and some new thing, dripping and hungry, will emerge. The world seems poised for something, anything to happen, a bloodletting, truth-telling moment when all holy hell breaks loose.

Seems fitting that it should come hurtling out of the darkness on All Hallows' Eve.