Throughout the recent federal election — and for months before — Canada’s prime minister repeatedly asserted, “We need returns from a pipeline to pay for green energy.”

The gut sense of anyone worried about climate change is that this proposition is wrong. Why would we build a pipeline to convey and then burn fossil fuels, as a way to — get this — avoid burning fossil fuels? The logic seems twisted.

The deeper question of concern to me is whether Trudeau’s position is a political calculation, or one based on some form of economics?

By political calculation, I don’t mean an attempt to appease western voters; that clearly has failed. Rather, is Canada playing a high stakes political game that exploits a weakness in international carbon accounting to shift blame on to other countries. Let me explain...

As a signatory to the United Nations Framework Convention on Climate Change, Canada has agreed to “protect the climate system for the benefit of present and future generations of humankind.”

Under the UN Convention, developed countries are required to report their greenhouse gas emissions every year. They only account, however, for emissions physically occurring within their national boundaries.

This means that Canada does not count more than 900 million tonnes of carbon dioxide that comes from others burning our fossil fuel exports each year. This amount far exceeds our own territorial emissions that are just over 700 million tonnes of CO2 equivalents.

Canada completely washes its hands of any responsibility for the greenhouse gas emissions that result from our massive fossil fuel exports. Yet, we know full well that the impacts of carbon emissions are shared globally. To put it crudely: not only are we screwing future generations ourselves, we are aiding and abetting other countries in doing so too.

Since Canada committed to the UN Convention on Climate Change in 1992, our territorial carbon emissions have gone up by an embarrassing 17 per cent. But this is nothing compared to the emissions from our fossil fuel exports that have almost tripled!

An even greater problem with Canada’s massive oil and gas sector is that it undermines our ability to transform to a low-carbon economy by crowding out other potential forms of capital. Building new pipelines hinders a potential green economy because it uses resources that we need to construct further renewable energy supplies, renovate our building stock and electrify transportation. 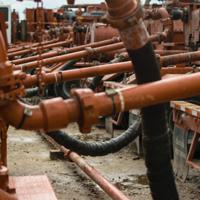 We already have all the wealth, talent and resources we need to invest for a green future — we just need to find the courage and leadership to employ them.

The $4.5-billion-dollar Trans Mountain pipeline has been the key battleground between Canadians who care about climate change and those who pretend to. It may become the defining issue that describes Trudeau’s legacy in history books.

But the Trans Mountain pipeline is just a drop in the bucket. Canada’s oil and gas industry has grown so massive that it now has over $500 billion of assets. This is more than 20 per cent of Canada’s capital stock, excluding residential homes.

And here’s the kicker. Any plan to seriously address Canada’s carbon emissions needs to give up on these fossil fuel assets — and construct a new green capital base.

Writing off the old Trans Mountain pipeline would be a historic first step to Canada’s prosperous low-carbon future.