British Columbia’s government has lost a fight to keep secret how much it provides in credits to companies that drill and frack for natural gas in the province, and the researcher who won the information’s release says the subsidies have totalled more than $1 billion in recent years.

“It’s been quite a battle to get to this stage,” said Ben Parfitt, a resource policy analyst with the B.C. office of the Canadian Centre for Policy Alternatives. “At almost every step of the way the government has refused to provide information on these subsidies.”

In a report released Nov. 13, Parfitt found that over the last two fiscal years the government has provided $1.2 billion in credits to companies drilling deep wells and fracking horizontal wells, a process that involves injecting liquids and chemicals under high pressure to break up rock and extract gas.

Companies including Petronas Energy Canada Ltd., Painted Pony Petroleum, Shell Canada Energy and Cutbank Dawson Gas Resources Ltd. have received hundreds of millions in credits that reduce the future royalty payments they owe to the provincial government for access to the publicly-owned resource.

“We’re out of pocket to the extent that if those credits did not exist, if the program did not exist, then the royalty revenues would be higher,” Parfitt said. Budget documents show that in total the government expects to collect about $250 million a year in natural gas royalties.

The deep well credit program dates back to 2003 when it was intended to help with the development of a type of drilling that has since become normal in the industry, Parfitt said.

“It underwrites a portion of the cost associated with doing the drilling of these deep and horizontal wells,” he said. “Given the nature of the resource, which is largely now in these deeper, denser shale zones, pretty much every well that’s being drilled is going to qualify for credits.”

Parfitt said it’s disturbing how the provincial government is managing a non-renewable resource. “If we’re going to be exploiting these resources — and there’s many reasons why we should not be, given the climate crisis that we’re in — but if we’re going to be exploiting them, we ought to be getting top dollar and we ought not to be subsidizing companies to get those fuels out of the ground.”

B.C. Finance Minister Carole James was unavailable for an interview.

In response to a request for comment, an official with the Canadian Association of Petroleum Producers sent a fact sheet that says royalty credit programs help maintain competitiveness, stimulate investment and build a strong economy.

“Royalty credit programs take into account unique development and production costs for natural gas in the province,” it said. “A royalty credit program is designed to bring shared benefit to government and industry and is not a subsidy from government to industry.” Credits are in fact earned by industry, it said.

The credit “encourages producers to develop deeper, higher-cost resources that require additional capital investment,” it said, adding that even when wells have received credits they still pay minimum royalties, and at the end of a well’s life the companies remain responsible for all decommissioning and reclamation costs.

CAPP added that the B.C. deep well credits were worth $270 million in 2017-18, considerably less than the $700 million included in Parfitt’s report. It’s unclear what the source of the discrepancy is, but Parfitt said his figure came from records from the provincial finance ministry and he didn’t know why CAPP’s figure would be different.

Parfitt said it took two years and a ruling from the Office of the Information and Privacy Commissioner to get the government to release the information on the deep well credit program. 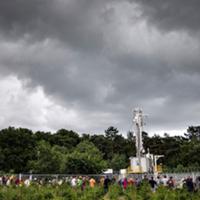 UK Ban Adds to the Tremors Taking Down the Fracking Industry

“One can speculate the reason for being so reticent is that frankly, it looks bad,” he said. “It looks as though the government is essentially underwriting the cost of these operations and the net effect is the public is short changed, ultimately, on the return for those resources being extracted.”

He said he is still working to find out how much each company actually pays in royalties so the amounts can be compared to the credits they’ve received. “We’re going to see when that information finally comes out that the royalty rates are dramatically reduced for each company as a result of these credits that are being banked year in and year out.”

The program began under a BC Liberal government, but has been maintained by the NDP minority government that governs with the support of three Green party MLAs.

“From what I’ve seen over the course of the last few years, there’s really nothing to distinguish the current government from the Liberal governments that went before it,” Parfitt said. “If you look at the continuum of regulation of this industry there has been very, very little to distinguish the NDP and the Liberals on the gas file over the years.”