Haven’t heard from you lately. Are you still around?

If your query is related to a debt claim or other legal action, Dr. Steve disavows any responsibility and asks you to contact his solicitors. Otherwise, thanks for your interest.

Dr. Steve has in fact been overseas. He has spent some time in Italy, that fabled land where once upon a time Hannibal and his fearsome elephants were foiled by the strict carry-on baggage regulations of Air Roman Empire. At least, that’s what it said in Dr. Steve’s teleprompter. Dr. Steve has learned much on his Italian travels, such as the meaning of “stronzo,” the universal nature of obscene hand gestures, and the fact that Homer Simpson’s “Mr. Plow” was known here as “Mr. Spazzaneve.”

Your faithful correspondent has also recently spent time in Ireland, both Northern and Regular. There are many mysteries in Ireland, chiefly, if counting sheep really does make you sleepy, how do Irish drivers ever stay on the road? Also, when people hear sheep making their characteristic noises, is the urge to make sheep noises in return the most irresistible of all human compulsions? (This question applies to tourists only.)

Dr. Steve was also fascinated by Irish radio. For one thing the dedication — sending a song out to Grandma Kate on her 75th or your beloved husband on your anniversary — never went away in Ireland and is a feature even on national radio networks. Outside of Dublin, Belfast and, possibly, Cork, the whole country is like one giant small town, in all the best ways.

The other thing about Irish radio is that when they are not playing lovely classical music or taking lengthy on-air calls complaining about how people aren’t neighbourly anymore what with phones and all, they are discussing Brexit. More specifically they are talking about Boris Johnson.

Johnson, as absolutely no one calls him, is one of two remaining candidates to replace Theresa May as British prime minister. There is another man running but no one is certain what his name is. Maybe Greg something. Later this month Conservative MPs will choose between Boris and what’s-his-name. Understandably, Boris is favoured.

Dr. Steve suspects that Republic of Ireland radio stations like RTE are a better source for Brexit discussions than English radio, since Irish stations don’t have to worry about insulting the halfwits who voted for it. They can devote their time to having expert panels discussing whether Brexit is a reality show based on the comedy series Little Britain, or just an ongoing affirmation that the War of Independence was well worth the considerable trouble. (Regular Brexit guests on Irish radio include Ealing Labour MP Stephen Pound, who is a pleasure to listen to.)

When Boris, the U.K.’s next prime minister, tells an interviewer that his hobby is building little buses out of wooden crates and then painting little happy faces on all the little wooden passengers, Irish stations can concentrate on the question of whether Boris is two stops beyond Barking or in fact very cleverly changing the subject from “How can you make this ludicrous Brexit proposition remotely feasible?”

Everyone is fixated on Boris, and not just for the lack of a viably fascinating option. It’s common for pundits to compare Boris with Donald Trump, possibly because they both have a fondness for saying things that are racist and/or untrue. But perhaps the truest connection is that both men are train-wreck mesmerizing. Boris isn’t really like Trump at all. He’s a strategic rather than a pathological liar, and unlike Trump no one has ever claimed that Boris would lose a battle of wits with a sandwich. 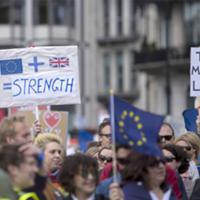 Please Advise! Is the World Voting Its Way to Ruin?

Boris is by all accounts the consummate dilettante, a deeply unprepared bluffer who ideally would not need to be taken seriously. But he’s not stupid. He’s got that lazy schoolboy cleverness that facilitates his bouts of breezy bullshit. And while Trump is too much of a screw-up to really qualify as an opportunist, there is no doubt that Boris is, as they say in his neck of the woods, a chancer.

The vote results will be announced July 23. Boris insists that as PM he will ensure Britain exits the European Union on Oct. 31, deal or no deal.

That should be a day for consuming large bowls of popcorn and candy. But if you live anywhere in the U.K., Dr. Steve suggests you stock up on those popping kernels now. Also gasoline, canned goods, antibiotics — you can find tips here.

Eschewing any final wisecracks about sheep to the slaughter, Dr. Steve wishes one and all the best of luck, happy Brexiting, and a happy birthday to Grandma Eileen from your 73 great-grandchildren.