I spent roughly half my childhood in Whistler, in the late '60s and '70s. Relative to what it has become over the past 40 years or so, what made the place so remarkable then was what it lacked.

There was no Blackcomb mountain to ski on, no Whistler Village (the site was a garbage dump), and just a few scattered bars and restaurants. Every Saturday night (I know, right?) our family attended Catholic mass at Whistler’s lone place of worship: a comically diminutive A-frame Creekside chapel. To me, a bricks-and-mortar chapel always seemed out of place in Whistler because the mountain itself was the shrine. There were very few tourists back then, and so there were no chairlifts lofting hundreds of people per hour into those big, beautiful bowls. If you wanted to get at the pow up there, you had to hike for it. Bring your lunch and hope a storm doesn’t expunge all visibility within the next couple of hours.

I invoke this past not just out of nostalgia, but also to provide a contrast to the way Whistler has evolved since then. Regularly deemed the best ski resort in North America, it is now a tourist colossus.

However, this may not last for long. The lower half of the mountains already struggle to hold their snowpack throughout the ski season. If average winter temperatures rise even a little more, as our best climate models predict they will, Whistler Blackcomb is in big trouble. Winters will be rainy and mild, summers dry and fiery. Gone, as a result, will be the signature, and most thrilling, feature of these hills in winter: those seemingly endless, leg-burning runs winding gloriously from peak to valley. Because of consumer downgrades like this, Whistler is likely looking at huge future revenue losses. If you’re inclined to moralize, you might think that because it is the quintessence of excessive consumption, Whistler deserves whatever hard rain it has coming. Maybe, but we all have a reason to bemoan the fact that climate change is likely going to bring non-negligible economic hardship to this magnificent place in the near future.

Enter the mayor of Whistler, Jack Crompton, who suggested in a recent letter that oil companies ought to pay the costs of climate change his community will be increasingly forced to bear. The oil companies reacted petulantly, many of them withdrawing from an upcoming energy conference held annually in Whistler. Crompton later apologized for his comments, a version of which has also been approved by at least 16 other local councils in B.C. including those of West Vancouver and Victoria.

Ordinary folks outside of such charmed locales are evidently not impressed by the good mayor’s demand. A few days after Crompton’s missive appeared there was a large gathering of fossil fuel industry supporters in Grande Prairie, Alberta. Their central message was that the tofu-eaters in Toronto and Vancouver (also Whistler, presumably) are arrogantly out of touch with the people, like oil and gas workers in Alberta’s Peace River region, whose largely unsung labour enables the national economy to hum along so smoothly.

When it comes to climate and energy policy this is how the battle lines have been drawn in this country, especially by the media and especially in the West. As a result, we are apt to imagine the folks in Grande Prairie and those in Whistler occupying either side of a great cultural chasm, artificially pitting producers of fossil fuel products against their consumers. On one side there are the hypocritical enviro-weenies who don’t seem to realize that they use lots of oil, on the other the myopic lackeys of uncaring polluters who appear to think the Intergovernmental Panel on Climate Change is the vanguard of a tyrannical world government. Tofu or triple-A Alberta beef.

These are caricatures of us, and they are getting in the way of an adult conversation about how to distribute the costs of climate change adaptation. Perhaps there’s more agreement among us than we might think on this issue. In the midst of the dust-up between Crompton and the oil executives, the Canadian Chamber of Commerce issued a report expressing strong support for a carbon tax in the battle to fight climate change. Of course, the chamber does not directly express Canadian opinion on any matter but because it represents businesses of all sizes from across the country, it is a workable proxy for it. So the chamber’s report indicates that a very large swath of Canadians understands the general importance of beginning to price carbon-based commodities out of the energy mix. It’s likely that this same group also understands the extent to which we are all currently dependent on fossil fuels. Why assume this about them? Because the whole point of taxing the harmful byproducts of industrial processes is to erect a material counterweight to some deeply ingrained and pervasive consumer purchasing habit. You favour this or that ‘sin tax’ precisely because you know the rot is deep.

So let’s ditch the caricatures and start the discussion here, with a frank recognition of our near-universal dependence on these commodities (this is basically what Crompton said in his apology). There are plenty of complex policy problems to tinker with from this conversational staging-ground, from the optimal speed of decarbonization to which renewables we should develop most aggressively or what our immigration policy should look like with more and more climate refugees on our horizons. The suggested starting point stresses what we share in this country, and so I think we would do well to embrace it before we get to the tough policy stuff. We are not divided into either consumers or producers of fossil fuel products. We are, among many other things, a national political community, a polity, of oil producers/consumers. If we allow ourselves to be torn politically asunder at this stage of the long and gruelling process of adapting to climate change, can you imagine what will happen to us when the shit really hits the fan? 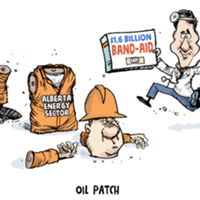 In this spirit, we Canadians should all accept what is now indisputable: that our economy will eventually move away from fossil fuels, hopefully before it is too late to matter.

And there’s the rub. Because we have dithered on this issue for so long, to matter the move must happen very quickly. In an economic transition of this order there will be winners and losers. But because we all currently depend on this commodity, which is fast becoming political anathema, we should agree that justice requires us to shoulder the burden of economic adaptation as equitably as we can. We require a national strategy aimed at providing robust support to those most vulnerable to the shocks of the coming transition, whether they work in the ski industry or the oil industry. That is a very tall order, but the emphasis on what we share can help move us in the right direction.

As a now departed and somewhat heartsick Whistlerite, I’m proud of what Jack Crompton wrote in his letter. But I’m also glad that he apologized for it, because he may have decided to rethink the issue of climate change costs and fossil fuel dependency in the more nuanced fashion suggested here.

Whistler is still a great place to ski (though I will miss the peak to valley cruise). Given its precarious future, perhaps now it can also help galvanize the conversation we need on these issues.

Dear readers: Comments are closed over the holiday break until we return in 2019. Thanks for all the thoughtful comments this year!