Perhaps it wasn’t as exhilarating as forcing the resignation of an NDP candidate by finding some risqué Facebook photos.

But the spin doctors in the BC Liberal war room must have felt a frisson of pleasure on discovering images of United Steelworkers international president Leo Gerard shaking hands and accepting a pen from Donald Trump after the unpredictable U.S. president went rogue and attacked Canada over softwood lumber.

Cue the anti-NDP ad campaign that disingenuously ties the Steelworkers’ Gerard, a Canadian from Sudbury, and BC NDP leader John Horgan to the mercurial, protectionist — and some might say unhinged — Trump.

The BC Liberals had already played up the provincial NDP’s close connection to the Steelworkers union, which represents about 18,000 forest workers, among other employees. And the Liberals needed to create a distraction because they were being hurt by the media uproar over the party’s Wild West, pay-to-play campaign finance strategies.

Premier Christy Clark’s meme machine attacked the Steelworkers for putting senior NDP campaign officials on the union’s payroll and then loaning them to the NDP, a legal and transparent practice. The Steelworkers also contributed more than $672,000 to the NDP last year.

There was nothing new here: the Steelworkers have been big backers of the NDP since the party’s formation in the early 1960s and the union — like most of the labour movement — has always financially supported the New Democrats.

Still the Gerard-Trump handshake served to further reinforce the BC Liberals’ strategy of creating a false equivalency around fundraising — and it helped the centre-right party manufacture a cozy, though non-existent, alliance between the NDP-backing Steelworkers and Canada-bashing Trump.

Soon the Liberals were paying for social media ads attacking Gerard for not standing up to Trump at the White House event, as if the Steelworkers’ leader — who supported Hillary Clinton — should have thrown a hissy fit when the president unexpectedly went after Canadian softwood lumber.

“Leo Gerard, head of the U.S. Steelworkers. His union pays John Horgan’s chief of staff and campaign director to keep the NDP on a short leash so his American union can go after B.C. jobs,” the Liberal ads claimed. “Gerard tried to shut down a B.C. paper mill to protect American jobs. Ouch. Kitimat to protect U.S. aluminum jobs. Softwood lumber when Gerard stood with Donald Trump as Trump called B.C. workers a disgrace. Ouch. John Horgan on every side, but yours.”

Really? Or is this fake news?

Gerard stood with Trump because he wants a probe into the import of Asian steel. The meeting had nothing to do with softwood, until the end when Trump reached for some hand-written notes he’d brought along. Suddenly, he was calling Canadian trade practices a “disgrace.”

“I was able to see his notes, because I was that close, those were handwritten notes that he went off script about,” recalled Gerard, in a radio interview.

“So certainly we are going to work with our Canadian membership and our Canadian government to sort out this silliness about softwood lumber. And again it’s muscle-flexing to prepare themselves for negotiations on NAFTA.”

Gerard added that Trump “is different. But we’re not going to let him screw our members on either side of the border.”

This didn’t stop premier Clark from telling reporters that the BC NDP is “completely compromised.” She added that “now we know the guys in Pittsburgh who stand Donald Trump are paying directly the salaries of the BC NDP’s top campaign officials.”

In response to Clark’s comments, Gerard said that the premier “has falsely claimed that my meeting with U.S. President Donald Trump was about softwood lumber — she just made that up — in fact it was about protecting our members’ jobs in the steel industry in both the U.S. and in Canada.”

Gerard said that the Steelworkers will defend their forest industry members in Canada in the softwood dispute, which he said is driven by American lumber companies trying to push up prices.

The BC Liberal ad also blames Gerard for a U.S. trade action launched against Catalyst Paper, which owns and operates the pulp and paper mill in Powell River.

Catalyst was ensnared in an American trade action when the Obama administration investigated a complaint filed by U.S. paper companies about a massive Nova Scotia government bailout of a another company’s paper mill in 2012. The Steelworkers backed the original investigation, but did not call for the investigation to extend to Catalyst. Catalyst was slapped with increased import duties and the Powell River mill operation was losing a million dollars a month due to the trade levy.

Recently the U.S. Department of Commerce determined that Catalyst should be excluded from any American countervailing duty.

The reference to Kitimat in the BC Liberal attack ad is in response to an unsuccessful attempt last year by the Steelworkers to get the U.S. government to impose steep tariffs on aluminum imports.

Gerard said at the time that his goal was to go after Chinese aluminum and that the proposed tariff could be applied in a way that would protect Canadian-made aluminum. 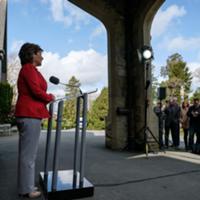 Last week Gerard said that Canada must be excluded from a U.S. government investigation into whether aluminum imports are harming America’s national security.

To the Steelworkers, the BC Liberal attack ads against Gerard are all about shifting attention from the campaign finance controversy.

“It was all the attention that Christy Clark and the contributions they are getting from corporations and wealthy donors outside the province,” said Steelworkers official Scott Lunny.

“They were looking for someone to attack in turn.”

Lunny said that contributions from corporations that employ Steelworkers in B.C. far exceeds —“I would say by tenfold” — the union’s contributions to the NDP.