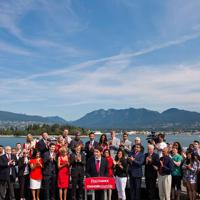 In Historically Unkind BC, Liberals Show Hint of Rebound

There are actually three -- not two -- things you can always count on: death, taxes and Liberals breaking progressive promises after an election campaign.

That's a long political tradition for the federal Liberal Party over many decades -- just like Lucy pulling away the football just before Charlie Brown can kick it in the classic Peanuts comic strip.

Former Liberal prime ministers Pierre Trudeau and Jean Chretien were masters of punting their progressive pledges as soon as safely elected to government.

They both followed a classic Liberal dictum often attributed to veteran operative Davey: campaign from the left -- but govern from the right.

So certainly there's reason to doubt current Liberal leader Justin Trudeau will keep his word on key planks in his platform -- like amending the repressive Bill C-51 security legislation -- after Oct. 19 should he be in a position of power. Because it's just not the Liberal way.

Pierre Trudeau ridiculed Conservative plans to implement wage and price controls during the 1974 election -- but then imposed them himself afterwards.

And Chretien solemnly promised before the 1993 election that on the hated GST: "I say we will replace the tax. This is a commitment."

But the Liberals did nothing.

It was actually Conservative Prime Minister Stephen Harper who reduced the regressive tax by two per cent years later.

So will Justin Trudeau really "move as quickly as possible" to amend the Conservatives' draconian "anti-terrorism" Bill C-51 if he is prime minister?

After all, Trudeau claimed he didn't like C-51 but then the Liberals voted for it in Parliament along with the Conservatives and against the New Democrats, who strongly opposed it. The bill was also condemned by Amnesty International, Canada's independent privacy commissioner, Human Rights Watch and even the National Firearms Association.

Why support it then? Speaking to University of British Columbia students in March, Trudeau actually said Liberal MPs voted for the legislation because:

"I do not want this government making political hay out of an issue... or trying to, out of an issue as important as security for Canadians. This conversation might be different if we weren't months from an election campaign, but we are," Trudeau said.

So in summary: Trudeau and the Liberals voted for bad legislation they disagreed with just so the Conservatives couldn't criticize them -- but don't worry -- they'll fix it after the election's safely over?

As far from a principled decision as you can get -- and it gives no reason to be convinced that post-election Liberals could be trusted to do anything on C-51.

And Trudeau may have even perfected the Liberal pledge breaking practice even further -- by flip-flopping on multiple important issues before the election is even over.

"I've committed to continuing to run balanced budgets. In fact, it is Conservatives who run deficits; Liberals balance budgets. That's what history has shown," Trudeau said in Markham, Ontario.

But in late August Trudeau changed his tune, promising to run deficits of up to $10 billion a year for three budgets and finally balance it in 2019.

And while Trudeau is campaigning now on a promise to legalize marijuana, he voted along with the Conservatives in 2009 to actually impose mandatory sentences for marijuana possession -- a position that earned him the wrath of pot activist Marc Emery.

Fortunately that legislation died on the order paper before being implemented but Trudeau's vote in favour is clearly on the record. He went along with the Conservatives on marijuana in 2009 for the same reasons he supported Stephen Harper in 2015 -- because it was seen as politically convenient at the time.

And that raises a bigger concern -- if the Trudeau Liberals will take positions based solely on political advantage instead of using a moral compass, like on C-51, what other promises will they abandon after the election?

For progressive voters troubled by Trudeau's opportunistic support for repressive legislation, what else he might do may be the biggest challenge of all for the Liberals in this election.